I have a 2019 Intel Mini. It’s served me very well, but I’m thinking about upgrading to a new M2 Mini once they are released later this year (as expected).

Should I do so, I will face the decision of either selling the 2019 model back to Apple in part exchange (or third party) or keeping it.

One option I was considering was keeping the Intel Mini and running it as a server. However, I heard recently that Apple have abandoned the specific OS server operating system.

My problem is that my knowledge in this area is pretty poor and I’ve struggled to find any good explanatory articles/guidance about this. Can anyone point me in the right direction?

Is there an advantage of a server vs an “always on” Mac?

Is there any advantage of keeping it as a specific “always on” Mac as opposed to my new M2 Mini?

I would like to keep an always on Mac for:
Hazel rules
DEVONthink
Email rules in Mail

Any guidance in this area is really appreciated.

Rather than listing a bunch of internal links to posts on this forum, I will commend you to the search icon in the upper right corner, which gives many useful results to a search for the phrase “mac mini as server”.

I was unable, however, to find any posts from people who are using an “M2 Mac Mini.”

Thanks for your response. I was particularly interested to hear the views of anyone on the “always on” vs server issue and the recent (I think) development of Apple no longer having specific “server” operating system.

I run a very old Mac Mini full time as a server of sorts. I don’t run the server OS. It’s mostly a media server, serving up the movies we own to the Apple TVs in the house via the native method and also via Plex. I also run cTivo on it, which can automatically download recorded shows from our TiVo and add them to my library for playing on the Apple TV, although I haven’t used that in ages. At one point, I ran Homebridge on it, but I’ve moved Homebridge over to my Synology.

For the three things you mention, it probably comes down to whether you’d be running them most of the time on your new M2 anyway. For example, for me, I normally have those three things running almost all the time on my main desktop Mac anyway, so it would be redundant to have them elsewhere. But if you don’t normally have them running, then it might make sense to have them running on a server Mac.

the recent (I think) development of Apple no longer having specific “server” operating system.

So the MacOS Server.app is basically being deprecated by Apple and the most useful parts of it removed - it’s basically becoming just a front-end for device management.
It still runs as an app so as far as I can tell, you have the same issue - you’ll need to VNC in and log in.
Sorry not to have better news!

Any computer can be a server. A server just a computer with a different job. I used a base model 2011 Mac mini as an email server for 200 people during a hardware upgrade and it could have probably handled 2000 users without a problem.

About macOS Server 5.7.1 and later

As of April 21, 2022, Apple has discontinued macOS Server. Existing macOS Server customers can continue to download and use the app with macOS Monterey.

I’m using a 2012 Mini as a server for backups, archives, and media. 24tb of disk hanging off it. No server software, just file sharing. I also run Dicker with pi-hole for DNS. Just got rid of the Synology I had been using as I wanted to go with just OS. I keep it in a cabinet in my basement with all the network gear, all protected by a UPS.

I’m curious about this cabinet use. It wasn’t always in the cabinet, right? Presumably you set it up on a desk, then moved it to the cabinet? And I guess you VNC in or something instead of plugging in a monitor?

Just curious. I plan on picking up a Mac mini for backups once tax season is over and assumed I’d need to keep it on my desk for easy access to a monitor and keyboard, but I know I’ll be irked by hard drive noise if I do that.

The Mini was bought for this use. Never used it as a regular desktop. Using with old monitor, mouse, and keyboard from when I used laptop as desktop. 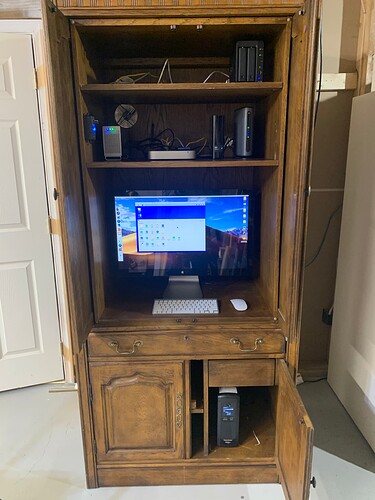 Cabinet was a bargain, got it at the Habitat for Humanity reStore for $29.
Added variable speed fan for temperature control. If I don’t feel like walking downstairs I can remote into it.

I’m still using a 2012 mini as a server. It has the server app and is running an older version of macOS that supports it. That said, I no longer need any of the services it used to provide, most being provided now by my router (DNS, DHCP, VPN, DDNS) with the Mac only being used as a Plex server, Resilio-sync “cloud”, backup hub, and general file serving.

I’ve had an always-on dedicated computer at home for about 20 years now and I would have a hard time “surviving” without one.

I don’t think there’s anything very special about running a Mac Mini with regular macOS as a server of sorts provided the software you can run unattended. I have a 2012 Mini as a media server connected to my TV (I see several others having them, guess it was a good vintage year) Although I use it a lot with a keyboard+trackpad combo to watch YouTube and stuff, but for admin & maintenance stuff I do it via VNC with Screen Sharing. No issues there.

I have a 2012 Mini as a media server connected to my TV (I see several others having them, guess it was a good vintage year)

That was the oldest (and therefore cheapest) model that supports USB-3 for external drives. Lots of them selling on eBay for around $100.

the recent (I think) development of Apple no longer having specific “server” operating system.

macOS Server was irrelevant by the time it was discontinued, and for the use-cases that you describe, you never would have needed it.

Most people use the term “server” for “always on automation Mac” rather than anything to do with macOS Server, so you can proceed without any worries.