Mac Power Users 474: Using the iPad as a Laptop

When thinking about making an iPad a notebook replacement, there are a lot of factors to consider. David and Stephen talk through the hardware and software that can make — or break — this experience.

This episode is literally perfectly timed for me.

I just started a new job which involves a fair amount of mobile computing, and lugging my 15” MBP (2013) around each day was killing my back. I briefly considered purchasing a MacBook, MacBook Air or MacBook Pro, but none of these options are compelling at the moment (bring on ARM MacBooks!). Time to stretch my iPad Air 2 to the limit!

Great episode! Unfortunately unless the startup I work for is purchased for billions of dollars, I cannot work with an iPad because I am a programmer (not even an Swift programmer). That said, I purchased my brother’s iPad Air 2 and I really like this device despite it being older.

It still runs super fast, the screen is beautiful. It’s perfect for apps like MindNode, Things, and it’s my ebook reader of choice (disclaimer, I rarely read ebooks). I also prefer to read long-form web articles on it than my MacBook, and I take online courses on it. Again, it’s mostly for consumption of media and content - not producing, but I’ve been very surprised by this little device.

I can see a completely unnecessary iPad Pro purchase in the future.

The mention of glass typing made me think “I should give that a try.” It seems to work pretty well. I’m typing with one finger and a thumb on my right hand, two fingers and thumb on my left, like a newspaperman in 1970. I just need an unfiltered cigarette dangling from the corner of my mouth to complete the look.

Thinking of getting a refurb first generation Apple Pencil for $85, thus continuing a MPU tradition of costing listeners money!

As someone who has the first generation Apple Pencil and is too cheap to upgrade—I would really suggest going with the 2nd generation if you’re going to do it, especially if you don’t have a use case in mind already. It sounds like many of the issues were ironed out in that second generation—mainly, EVERY time I go to use the pencil I have to charge it. It doesn’t take long—but it does not “spark joy” in the same way it might otherwise…

I like the new Pencil a lot more, too, but it only works on the 2018 Pros. All other iPads still use the first-gen.

All other iPads still use the first-gen.

Including the two announced today.

Ah, sorry, missed that detail! Ignore me then…

Aside from a few “hard” limits to the iPad’s use cases (e.g. compiling, multi-interface audio recording), I think the only rule of thumb on the iPad/Mac division is to follow your instinct. In other words, don’t elect to do a specific task on iPad/Mac because of stereotypes or others’ words. Do the task on the device whichever your mind tells you to be right.

True, it sounds more suitable to use iPad as a reading device, but I often find myself triaging my read-later list on Mac because it’s more efficient with more items on the screen and the full power of keyboard shortcuts. On the other hand, while it sounds awkward to produce a Numbers worksheet on the iPad, sometimes I prefer to do so rather than reaching my Mac because the iPad brings the work product right under my finger; the intimate feeling can help me to focus.

Sometimes, I begin doing something on the Mac and then switch to the iPad for some totally arbitrary reason — say, I want to stand and move. I might have save some time if I stayed on the desktop with the more powerful version of softwares, but the time loss was made up with the efficiency boost brought by my psychological ease.

If you are able do it. Otherwise… I don’t have the problem that my 1st gen  pencil is empty when I want to use it. The reason is that I switch off WiFi and Bluetooth when I put my iPad in my bag. A Siri Shortcut handles this for me. I think that the pencil switches itself off when it doesn’t have a Bluetooth connection with the iPad. The only disadvantage is that I need to pair the pencil again when I want to use it, for me that’s not a problem because I don’t use the pencil that much.

I’m retired but still do a little consulting. That is usually onsite, but if not I only need the ability to VPN into a location and remote into systems using Safari, Screens, or Microsoft Remote Desktop. So an IPad is the only computer I need for that and all my personal needs - with the exception of some file management

I have an old mac handling that now but it is fading fast and I don’t plan to replace it.

Lately I’ve been using File Browser for Business and found it a good addition to Files. I’ve used it to move files & folders to and from iCloud, Dropbox, Google Drive, and my Sandisk iXpand usb/lightning drive. It can handle emailed zip attachments and downloads and integrates with Files, like Dropbox, etc. But certain functions require using the app directly.

I’ve tested backing up files by copying them to/from Google Drive & iCloud, and for those times I’m “off the grid” to/from a 256GB Sandisk and my iPad. Seems to work well, even with a 7.5GB movie.

Not sure if I can use shortcuts to simplify some of the transfers, but that’s my next step if possible. 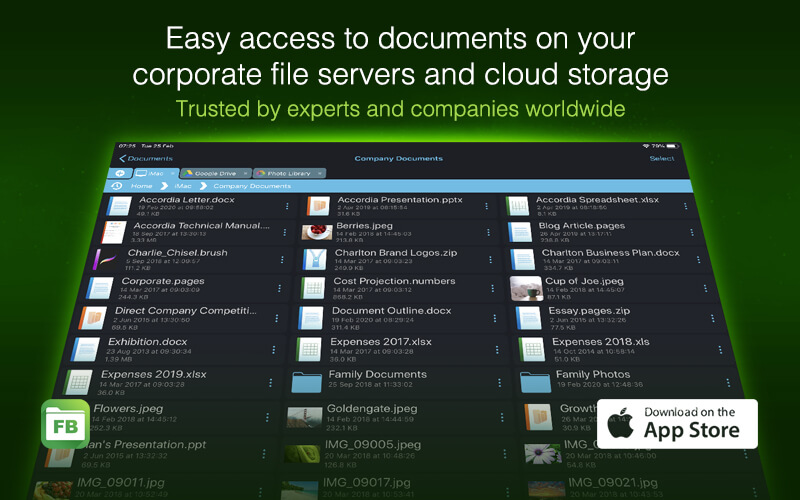 Not fruit punch in my case, but yesterday I did spill a glass of water on my Smart Keyboard Folio. Thankfully the iPad and the keyboard were no worse for wear.

I know I tend to talk a lot about tradeoffs in some of these iPad threads, but one dichotomy that really jumped out at me in this episode: @ismh and @MacSparky both praised the iPad’s battery life, but also wanted always-on background programs (stuff like Hazel on the Mac). While the power efficient nature of the A-series processors compared to Intel tends to get a lot of play when talking about iPad battery life, I think quite a bit of the credit also has to go to the power efficient nature of iOS. Part of the reason iOS is so power efficient is that it doesn’t allow things like background processes that suck battery life even when you’re not actively using the device. So, is Apple likely to trade a chunk of the iPad’s excellent battery life (or alternatively see iPads get thicker and heavier) in return for utilities like Hazel?

Frankly, I am more and more intrigued by the idea of a cloud storage service with Hazel-like scripting functionality built in so the always-on stuff can happen in a datacenter somewhere rather than on device. Until that comes around though, we can always fake it with an always-on Mac running Hazel.

It’s worth noting that the iPad (especially the 12.9") can serve as a great “terminal” for a remote Mac (as @WayneG also pointed out).

When I go on vacation, I typically only bring my iPhone and iPad with me. My MacBook Pro and (not surprisingly) my iMac stay at home. My iMac is always on and using Screens, I can connect to my iMac from my iPad during my travels if I need to do something that’s either not possible or overly tedious on the iPad.

To make it even more like being in front of my Mac, Screens makes it possible to use an iPhone as a trackpad.

Great episode! Frustration with the lack of a share sheet in iOS email was expressed a couple times. Discovered that there is a share sheet, but it’s a bit wonky to get to:

Sorry if this is common knowledge, but I saw this on a reddit thread yesterday as I tried to save some emails to Notability.

About how much bandwidth does screens take up? I’d like to use this as my mobile solution but am worried about data usage if I can’t find a reliable and reasonably secure Wi-Fi access point.

I typically use Screens when I’m connected to Wi-Fi, so haven’t paid much attention to how much data it’s using. I imagine it would vary depending on how much activity there is on your Mac’s screen (e.g. playing a movie would take more bandwidth than typing an email).

You might want to contact Edovia (the company that makes Screens) with this question. I’ve found that their support is excellent.

You can also monitor how much data Screens is using when on a cellular connection by opening up the Settings app and tapping on Cellular. Screens may automatically degrade the screen quality when running over cellular. There are also Settings in Screens that will likely impact data usage: Use Adaptive Quality and Scale Down Display.