Mac Studio specs for use as a server

I need to spec out a server for undergrad students to use and to run Docker to provide some services. My work want to go with a Mac.

I was thinking that the Ultra is the best fit for this purpose, but I was wondering if it’s overkill.

The students are data scientists and will just use it to learn, so it’s not going to be a public server or too overloaded most of the time.

Do you think a Max with enough RAM and lots of storage would be enough for this purpose?

Sounds like a multi-user situation where all the cores you can muster will get put to use. And if these data scientists are doing so-called Big Data, even more so.

What will you actually run on it? How many users will access it? This will give you a better idea of the processor and memory you need.

I’d say a Mac Mini with 16gb ram is more than enough.

Also think of a Synology NAS, which can run VMs and Docker. Probably easier to configure for multiple users

We have around 500 students on the degree, and it will be available to them in a lab to use when they want. We’ll be doing machine learning primarily using the Metal API to run TensorFlow models on the GPU. There are around 30-40 in a class, so that will be the peak number of concurrent users normally.

I have a M1 Mini at home, and it is not powerful enough for ML. The GPU is not sufficient, and that’s only with me using it.

Students will be practicing big data algorithms in Spark but we won’t have the storage for real big data analysis. They’ll be able to use the CPU to simulate a cluster, and we want to practice some intensive algorithms.

I’d say that this is typically a scenario that “the cloud” was invented for.

Besides, docker screams for Linux. Not a Mac. Saves you some, or your employer, some money too.

This is what I initially suggested, but we are an all Mac workplace and they want to invest in a Studio.

We already have full access to the cloud, but it’s not ideal for computer vision and real time 3D.

Yes, GPU is the most important component.

Also think of a Synology NAS, which can run VMs and Docker. Probably easier to configure for multiple users

We are also going to buy a NAS for storage. Which models do you recommend? It will be for 150-200TB of storage.

That’s quite a lot so you need a 6 bay with extension module or an 8 bay with larger drives.

Take one that allows SSD for caching and enough memory to run VMs. Start looking at something like the Synology DS1621XS+ and up or downscale as needed. It can facilitate lots of storage and runs VMs and Docker containers well

Make sure you have the iLO (out of band management)

Max the RAM and 4 storage bays.

Run ESXi or Proxmox for your virtualization of course Docker works as well.

Veeam for backup and replication

Advantage are the size of the MicroServer Gen 10 is small. Internals are very easy to access and it runs everything even TrueNas ZFS Do you think a Max with enough RAM and lots of storage would be enough for this purpose?

Just to update, I went with the Mac Studio Ultra in the end, which is going to take a few weeks.

In the meantime, we also just got these monsters for a new lab, which were just delivered: 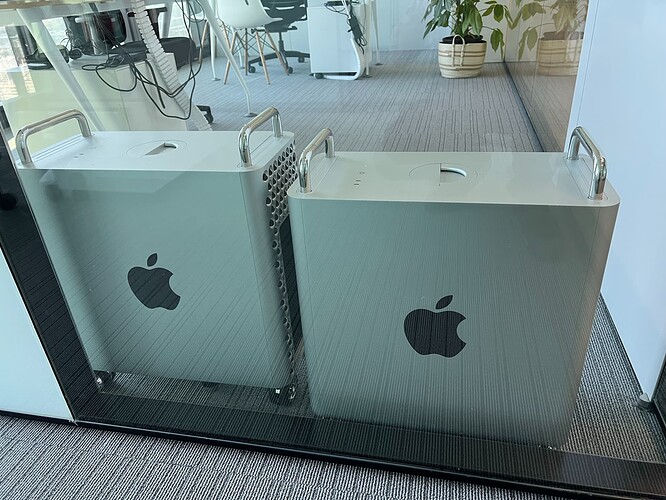 They both have 2xRadeon Pro W6800X. Now I have to spend the week testing them out!

I have a used 2019 Mac Pro coming this week myself: a more modest 8 core, 48GB RAM, single W5700. It’ll be seeing me through the next several months running a set of gnarly local dev environments that use virtualization unsupported by Apple Silicon. It turns out that this configuration is the cheapest way to run these environments constantly without losing time to thermal issues and paging. It should resell well enough once we’re moved onto more portable containers.

They are amazing, to be honest.

I just did a machine learning analysis today with 4TB of data using TensorFlow and Metal and I managed to max both the GPUs. They crunch data at a rate that I’ve never seen before, performance is ridiculous.