This evening I got a desktop pop-up warning from Backblaze that Mojave was stifling my backup (or words to that effect).

The pop-up offered the following link which gives step-by-step instructions on how to manually give Full-Disk Access to the Backblaze app in Mojave to permit the continued backups of the photo library, until they can find a way to do more automatically for users:

The only pop up I got was a notice about an update. Version 5.3.0.236 for personal accounts.

I downloaded the update this morning. The alert popped up tonight.

Presumably the alert roll out to all Mojave users over time, perhaps only to those who back up photos under Mojave (maybe cued when the photo library cannot be accessed).

I just noticed that Backblaze also sent me this email around the time I got that pop-up alert (8:30pm EST): 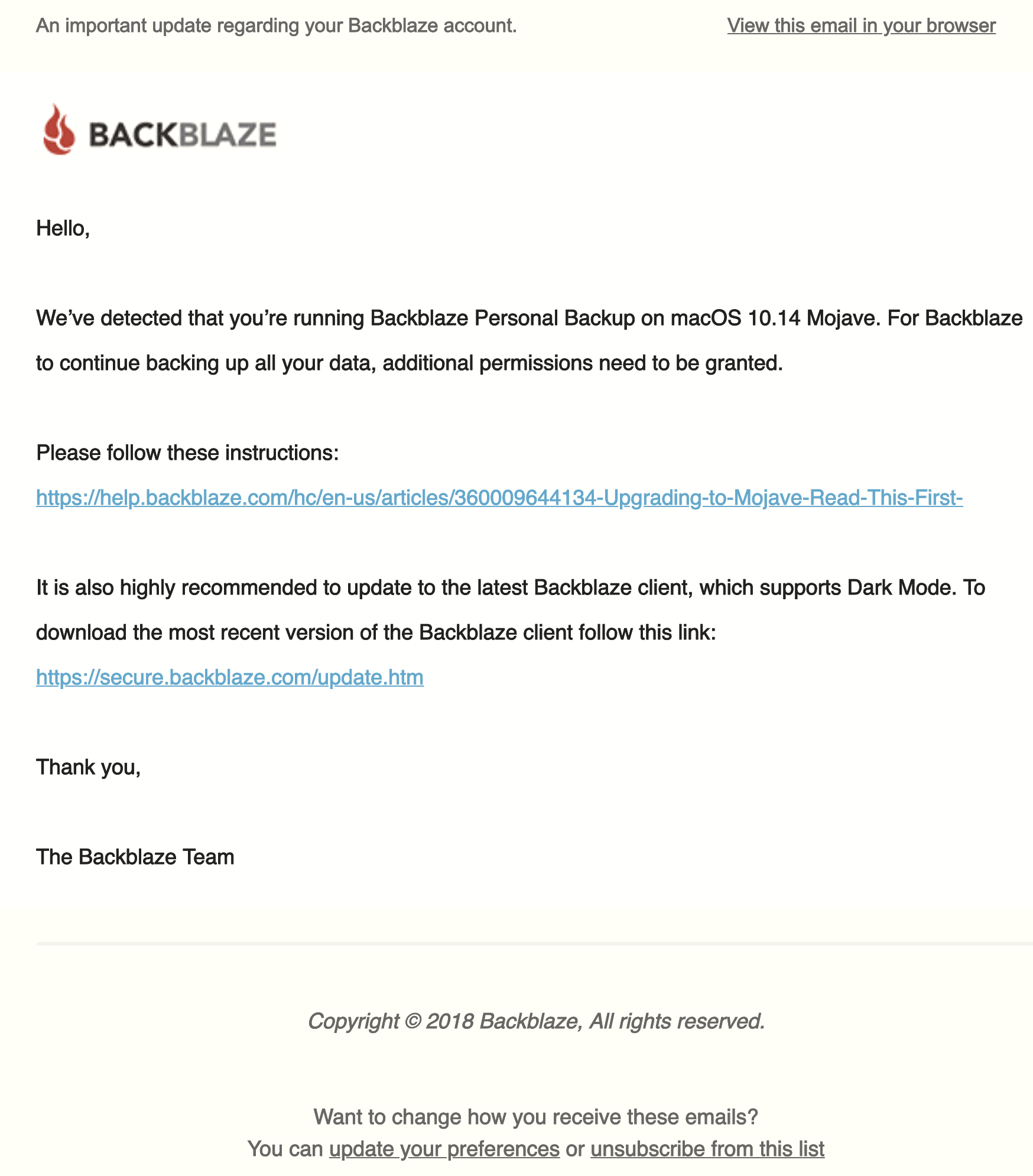 I got a heads up about this from Carbon Copy Cloner last week too as part of an update. They attributed it to a new security policy in Mojave that protects personal data (photos, mail, messages, …) even from privileged applications. So… Yah for more protections. Boo for making it complicated to enable it for applications that need access to do their job. Here’s the CCC’s background on this and their version of that process:

I worry that Apple’s gotten too strict with its privacy limitations in Mojave. When it keeps asking for permissions - a la Windows Vista - people will get ‘dialog box fatigue’ and just keep approving things anyway, the same way people click through now to get past GDPR dialog boxes.

In the mean time, the full-disk-access requests can be very important, I know, yet they are becoming noisome. I’ve had to approve a half dozen apps in the 3 days since I’ve upgraded to Mojave, and I just hope I won’t be continually bombarded with additional app launches.

I, too, have gotten all of the emails. I’ve also downloaded the latest install (there have been several).

However, my issue is that in Security and Privacy, in the Privacy section where you are supposed to copy over the folder/app into the “Full Access” folder… I don’t have the folder pictured. I have everything in their screen shot, plus Automation, Analytics, and Advertising, but no Full Access folder.

How do I get that folder set up?? I’m not seeing anything that would suggest how to set one up or anything?

Also, I went to Backblaze support and after pointing me to the same article 3 times and ignoring my screen shot, the answer I got was that it must be an Apple feature I don’t have so go talk to them. Awesome support.

Once in ‘Privacy’ you may need to scroll down a tiny bit to get to Full Disk Access: 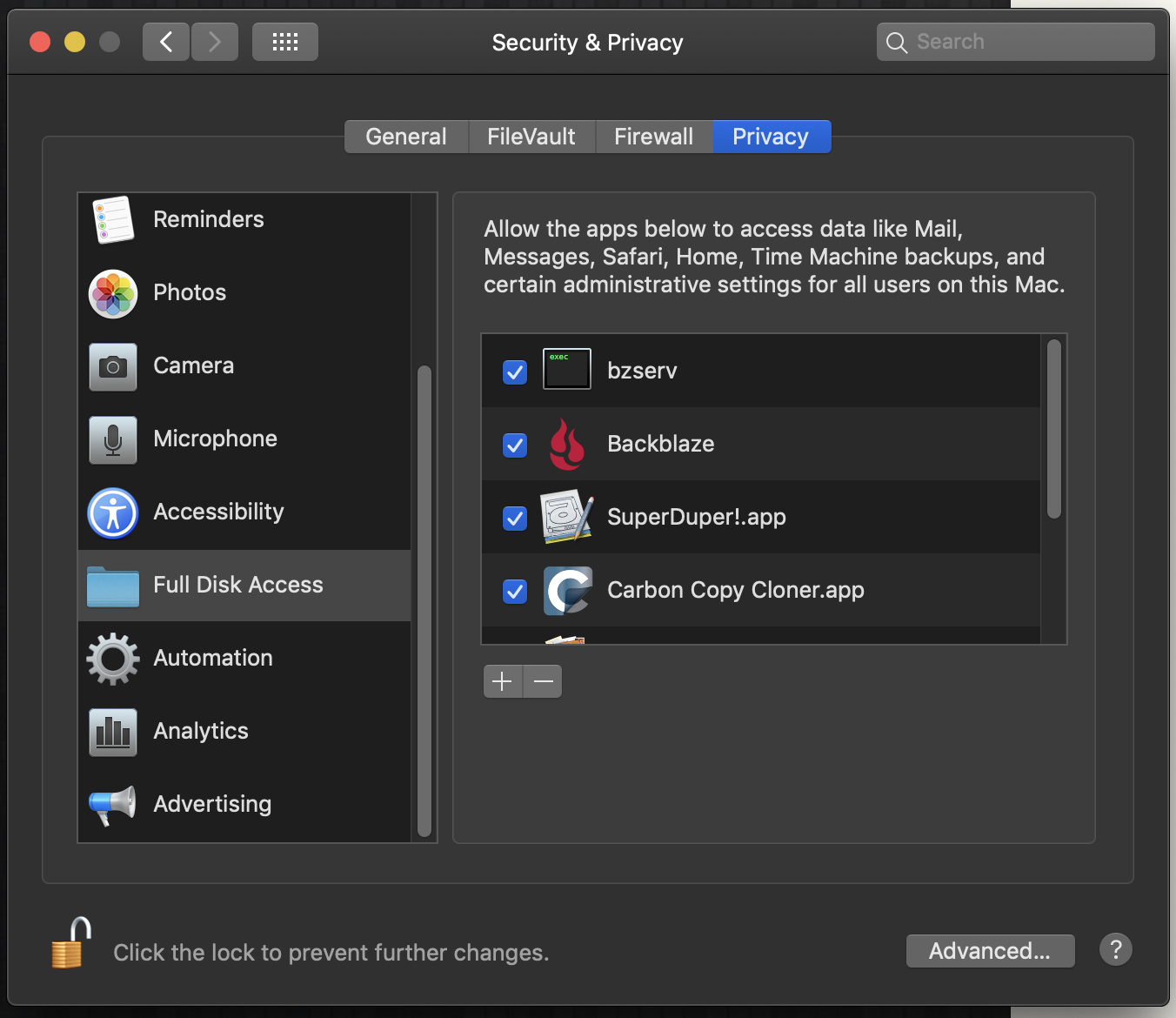 Once you unlock with password the pane in the lower-left corner you just drag the Backblaze app (from Applications, usually) into that pane; it will remain in its folder but the dragging puts it in that list of apps with Full Disk Access.

Then just make sure to check-box the app if it isn’t automatically.

This is why I posted here…I do not have the folder for “Full Disk” access available there on the screen shot. I have everything else, not the folder.

SO…where does the folder come from? How can I add it?

Thanks for helping on this vexing problem

PS interestingly, I have an email from Backblaze saying my last backup was yesterday. Maybe so, but it is not backing up everything unless this full disk access gets resolved.

This is why I posted here…I do not have the folder for “Full Disk” access available there on the screen shot. I have everything else, not the folder.

I do not have the folder for “Full Disk” access available there on the screen shot. I have everything else, not the folder

I’m on Mojave…10.14 (fkdajad beta). Oh, beta! I was on the beta program and the last update was pretty close to the release of the gold version and I thought I had upgraded. Not.

I just updated to Mojave 10.14 and the Full Access showed up and Backblaze was already in there allowing full access.

Thanks for all the replies…Quarm, you had the right answer forcing me to look at the actual version I was on and that’s what it took to fix this.