I tried Matter but ended up going back to Instapaper. I’ll give 2.0 a try—why not? 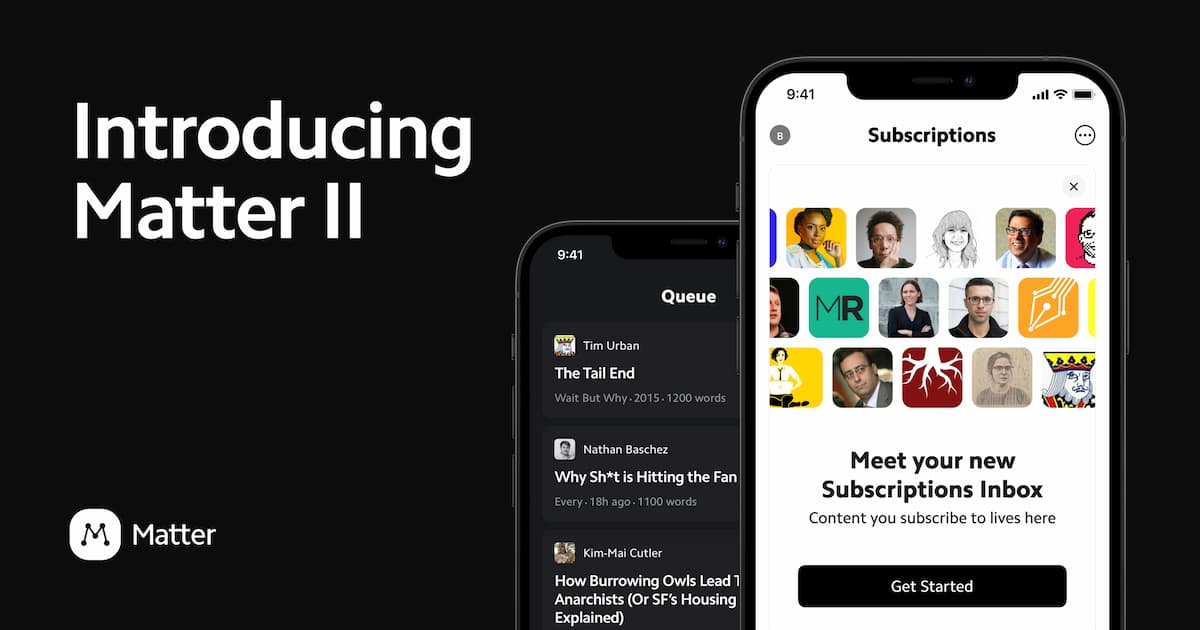 At Matter, we’re on a quest to build the perfect reader.

A couple of interesting features:

Looking good, but where’s the catch?
It’s not a subscription and no IAP??

Grow fast, try to figure out how to make money later before you run out of money.

Now, without social features, they’re suck trying to justify a large funding round with “just” read-it-later functionality. And, as has been proven time and time again, read-it-later isn’t Big Business enough.

So… I fear this is a really, really bad sign for Matter. I wish they had figured out the social side so they could survive and I could benefit from probably the best read-it-later functionality, but alas.

I’ve been interested in Instapaper and Pocket and all those apps since their launch, and there’s this part of me that thinks it was always obvious Matter wasn’t going to be a Big Business. It’s the same story — without asking its members to pay for its features, their value is basically 0, and since that was the longstanding price of Instapaper for its basic features as a Small Business, it’s hard to see how Big Business could ever compete.

I don’t know. I’m kind of sour on this whole category. I think Instapaper and RSS mostly solved this problem for me.

But I’ll add that I’ve never understood the attraction to Matter. It looked like Instapaper with a bit of Medium mixed with a little bit of Goodreads, and almost nothing beyond the Instapaper part does it for me.

To be honest, what makes Matter the best read-it-later experience for me is the actual core, the most fundamental piece: their document parsing.

That’s literally all I need it for. Sure, it does a couple other things better than Instapaper; their UI is much more modern and beautiful, for example.

But the document parsing! I’m pulling a number out of thin air, but I see 95% less errors in the stripped text in Matter than I do in Instapaper. Matter is near flawless at extracting article text – with formatting proper – and images from articles.

Finally, Matter does an infinitely better job at dealing with paid sites. I don’t know how this works behind the scenes, but if my browser can see the text, Matter extracts it perfectly, whereas previous gen RIL services almost always just extracted an article summary at best from paywalled content.

Luckily, I’m not too worried about Matter going away. Readwise’s beta Reader product does an even better job at parsing, with a slightly worse UI that’s getting better all the time. They haven’t fallen in to the VC trap and seem adamantly against it, so I’m happy to pay them for “just a RIL app”.

Ah, I hadn’t seen this difference in my usage yet, but I believe it. This has long been a flaw for Instapaper. Makes sense, thanks for sharing your experience!

+1 on the content parsing. Matter really is way better than any other parsing engine / RiL service I’ve tried.

I would say that Readwise Reader has all of the same benefits - excellent parsing, excellent handling of paid content, excellent highlighting support - with a couple of downsides that are fairly subjective and a couple of philosophical differences.

Another downside is that unlike Matter, they don’t have a Safari extension. I’ve switched to Brave solely for better Readwise support, but I’d move back to Safari in a heartbeat. They have a bookmarklet, but it is not good at paywalled content which is a lot of what I save. They say a Safari extension is coming.

As for philosophy: they have been anti-social from the start, which I like. They seem to care more about being an archive of everything you’ve read with robust full text search. They would love to be very keyboard-driven and have complex shortcuts to accomplish everything in the app. Like I mentioned above, they charge for their service, haven’t taken a bunch of funding, and are exceedingly available and helpful in their Discord, all of which bodes well for their longevity in my opinion.

@thickweb you had me quitting Matter again, because after using it just during lunch, I saw why I quit it the first time, which is that it’s two clicks to save, and I’m never entirely certain the article actually, y’know, saved. And if the business isn’t even sustainable, or will depend on some shady privacy-stealing business model to survive, well, why hang around?

Then you had be going back to Matter because better article parsing is a big deal.

I’m on the Readwise beta waiting list … and have been forever. So I’m not expecting access anytime soon.

Not NEVER certain, but sometimes uncertain. Often. And one of the sites that’s problematic with Matter is my hometown newspaper, so that’s significant for me personally.

Are you a paying Readwise user? I know they are prioritizing access for those users (read: only giving it to those users).

If you are, I may be able to get you in, they seem to respond well to existing beta user referrals.

I will say - I think they are being overly cautious with their release approach, but this isn’t them trying to create artificial scarcity. They genuinely believe it’s not ready and/or is changing too quickly for prime time.

another benefit of using Matter is that it has an Obsidian plug in. I do not have to pay for Readwise subscription to sync the highlight to OB.

by the way, @MitchWagner , do we automatically get Matter v.2 or there is a beta waiting list, etc. I try to find out the version details on my iPhone app but could not find it

I think we automatically get it.

@thickweb Thank you for the offer, but I am not a paying customer.

A question:
I have a huge,I mean really a huge, “list” of webpages I want to read later.
I have them as open Taps and also as bookmarks within Safari.
Is there an easy way, to get them into Matter?

I am a paid Readwise customer and would love to see the beta. They know me as lsievert@yahoo.com. Thank you for any help you can do.

What I love about MATTER:

First, you can now take a note at the article-level.

Second, the full suite of note-taking functionality is now available on web!

This is a biggie. Not only can you take article-level notes, you can take notes on highlights as you read:

Third, we’ve made it easier to get notes out of Matter.

Matter isn’t a fully-featured note-taking tool (and doesn’t aspire to be). Its job is to help you take notes while you read and to smoothly transfer those notes to your primary notes app.

You can also apply TFT syntax more easily with our redesigned text editor: