For those that are using Mastodon, what’s your favorite apps thus far? So many fantastic choices. When I was using Twitter I was using Spring so when that developer announced his Mastodon app, Mona, I jumped on the TestFlight and not surprisingly, it’s the app I’ll be using. I’ve also tried and enjoyed Toot!, Ivory (the Tweetbot for Mastodon app), and Mammoth.

To my eyes, Mona is on par with Ivory in the quality of visual design. It does lack the whimsical sound effects but makes up for that with unlimited split panes and all kinds of customization not on any other Mastodon app I’ve tried. In the screenshot I’m trying 4 split panes. At this screen size they get a bit narrow so I may go back to 3. Also, the developer has Spring as a one-time purchase rather than a subscription so I’m hoping Mona will be the same. Ivory is very well done but will, I’m guessing, be a subscription. Toot! Has even more visual whimsy going on than Ivory and is loaded with features. It’s been around for a couple years at least and is a one time purchase. My main gripe with it is the developer doesn’t use icons for the various buttons but rather text labels.

Lastly, spot the Easter Egg in my screenshot? 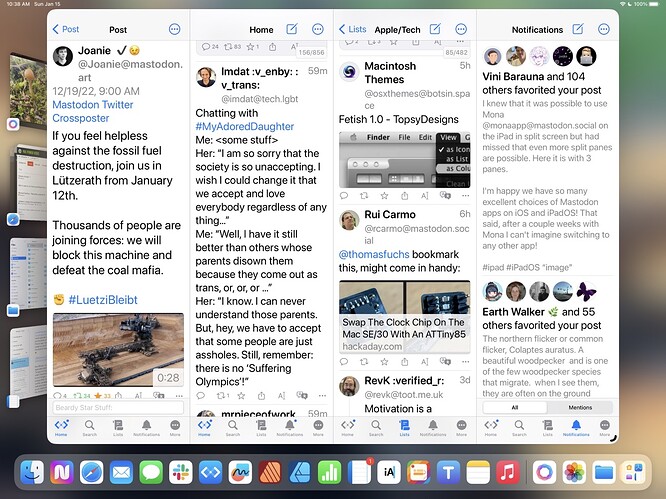 Ivory (as a former Tweetbot user).

A Mastodon app based on the award-winning Twitter app for iOS.

I am on Mastadon but I don’t really understand it, I have the ios app I found on the App Store I didn’t realize there was any other way to get it! I don’t understand ‘instances’ or how to connect to any other than the ‘social’ one I am on. I would very much like to.

I had a tweetbot subscription (due to expire soon), gave up as the mac app was left behind whereas spring has parity across the platforms.
Was quite excited to get Ivory, but I’ve missed every single test flight opening and now I won’t bother with it.

Was suing IceCubes for a bit which was ok, but the mac app wouldn’t even open - it just crashed.

Using the Mona beta and very much liking it.

Same with giving up on Ivory TestFlight chances. I’ll take a look when it comes out. I agree Mona has been great and their pace of development has been outstanding. Every update has been a solid step forward – really happy with it.

Growing a tad tired of the Apple podcastosphere talking about Ivory and how awesome it is, with the caveat “sorry you can’t get it yet”.

I loved many, many things about Spring (e.g. including the full tweet that was being referenced rather than a cut down version, threads, and polls), but I felt that it didn’t make it clear enough where one post ended and another started.

Growing a tad tired of the Apple podcastosphere talking about Ivory and how awesome it is, with the caveat “sorry you can’t get it yet”.

Yeah, no kidding. I mean, I wish TapBots well with it but over the past year I’d seen many complaints that they were not updating Tweetbot enough to warrant the subscription. I think it’s one of those darlings of the popular kids and benefits from a halo effect. The downside of that is that many other great apps, perhaps better than the darlings, never get the attention they deserve. Mona (and Spring) are a great example. put Mona side by side with Ivory and they are VERY similar. I’ll grant that Ivory does have a nice, original take on various buttons and the app icon as absolutely adorable. But in terms of the features, customization, Mona has so much more going on.

This gizmo in Toot! Is just so cool. It allows easy switching between instances with the flick of a thumb. 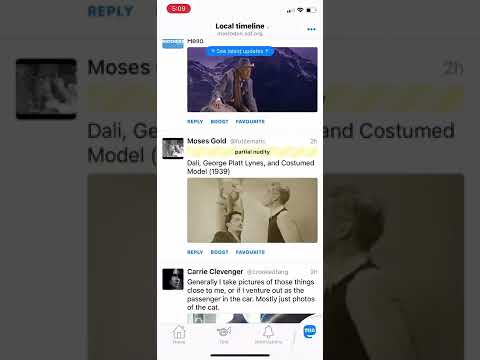 I have since switched completely to Mona (Mastodon) and Spring (Twitter). Mona is still in development, but on a good path that takes more and more into account the specifics of Mastodon. Above all, I like that the Mac app is not a second-class citizen in either case. The - very extensive - feature set is largely identical on all supported devices. And the Twitter app is still working at the moment.

I actually like Mona on Mac, iPad and iPhone, installed Mona on all platforms

Also , I found a very cool site https://twitodon.com/ , it checks your Twitter follows and upload to Mastondon, quite neat