I have an M1 Pro MacBook Pro connected to two external monitors through an OWC Thunderbolt Dock. I have certain apps set up on certain Spaces on certain monitors. However, I am always hesitating to unplug the laptop and take it with me because the monitor setup scrambles a bit once I plug it back in to the dock.

Does anyone have a solution to preserve this setup or am I stuck rearranging things every time I reconnect? Is the an OS issue that Apple has to address? Thanks in advance!

Both Stay and, as I recently learned, Moom can be configured to restore windows based on monitors connecting/disconnecting. So take a look and see if either will work for you.

Stay looks interesting. I will look into it. Thanks!

I use a Keyboard Maestro macro that runs on monitor connect, login, system wake, etc and positions a set of windows (Mail, Calendar, Things) to their proper locations on my second monitor.

I find this is a problem for me only if I have multiple spaces on my non-primary displays.

Cool. I have KM. Would you be willing/able to share the macro?

Darn you! You cost me US $16 for SwitchResX. Although it was for a different use case then the OP’s.

Still it solved my issue and I am happy.

Here is what I have done:

Firstly, this macro is the one that moves the three apps I referenced (Calendar, Things, Mail) to their appropriate positions. I have a two monitor setup, and trial and error was used to figure out the correct screen to use in KM, as there isn’t an easy way to figure this out programmatically.

Basically, what this does is:

The subroutine itself is given here: 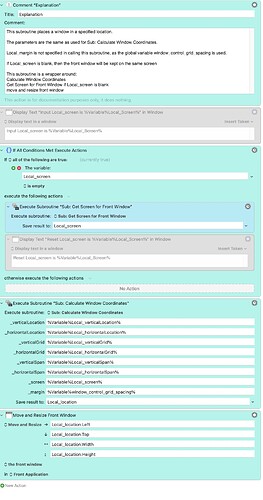 What this basically does is:

Finally, the macro to figure out window coordinates:

The majority of this macro is actually just checking the various inputs to make sure they all make sense, like you haven’t specified 0 or -5 rows or that the starting position plus the span doesn’t exceed the number of elements, so that the window will fit on the screen (you might not have wanted that; you might want to position a window on a screen so part of it hangs off, but I don’t, so I make sure that won’t happen).

There is also a subroutine that positions a window but takes the parameters as a JSON object instead of as individual arguments, as that is useful in some places.

I have a bunch of macros to put windows in various places like top half, left third, etc. Many of those are tied to buttons on my StreamDeck.

If this is of interest to you or anyone else I can post the macros for downloading. Caveat emptor. They work for me, but I cannot guarantee there are no bugs. Worst case, however, is that a window winds up in the wrong spot - I don’t see a way to hurt anything more than that.

Thanks! I downloaded and installed Stay before leaving for vacation. I saved my setup, then disconnected my laptop. However, when I reconnected the machine to the dock when I got home, and Stay restored the windows, Monitor 1 was fine, but the Spaces on Monitor 2 were all crammed into one. Is there a setting I missed? Do you, or anyone on this board, use Stay that can help? Thanks!

Spaces for both monitors were jumbled together, and not grouped by monitor

This is a problem I had/have too. My only solution so far has been to make my external display the primary display when docked and manually move any Spaces that are on my MBP over to the external display before undocking (and move them back after docking). It’s not an ideal solution but it keeps things where I put them when docking/undocking. This is something that I do usually only a couple of times per day so it’s not terrible.

I’m traveling thus the delayed reply. And I’m not at my Mac so I can’t try things.

I think my use case is a bit different than yours. I have four monitors and ten spaces. Note the spaces are shared across the monitors. I share one of the monitors with my work windows laptop, switching back to the Mac at the end of the work day.

My windows move as set up in Stay and do so across the spaces. I’ve not had them bunch together as you describe.