My commitment to Apple’s default apps for professional work failed

As I’ve posted previously, probably too much, I have been committed to using Apple’s default apps for a while now. I’ve pushed those apps about as far as they can go.

Sadly, “Apple forced” me to move on.

As I posted here, I’ve reluctantly lost faith in Apple Notes for my professional work (though Reminders has functioned flawlessly). The still unresolved issue with Apple Notes (as of January 1, 2023) has made it impossible for me to trust AN for my meeting and project notes. And because I depend on the ability to integrate my notes and projects, once I felt compelled to leave AN, I also needed to abandon Reminders for my professional work.

Consequently, I’ve turned 180 degrees; I’m now back where I started: OmniFocus + Craft. Craft has an excellent plug-in that will transfer todos in Craft directly to OF with the link preserved. And, as most on this forum know, OmniFocus has every feature one would need for project management short of professional project applications like OmniPlan and MS Project.

I’m disappointed. Because of the deep integrations and the robust features of AN, I want to use Apple’s default apps. In addition to deep system integration and powerful features, Apple’s apps are free.

But, when one of the essential features of a modern app, dependable syncing, is not provided, I am forced to move on. Unfortunately, as noted above, the issue with AN syncing is still not resolved. It will be, eventually, but I cannot afford to waste any more time trying to get things to work; I need to get my work done.

So, I have revamped my workflow. I intend to keep this workflow for one full year with no changes. You are welcome to hold me accountable. This change was not intended as a New Year’s resolution—I’m not a fan of those—but given the coincidental timing, I suppose it will be.

Beginning today and for the foreseeable future, my primary apps will be those I consider to be among the best in class for my needs and the purpose for which they are primarily designed. I’ve decided that I will pay for the feature set and reliability. 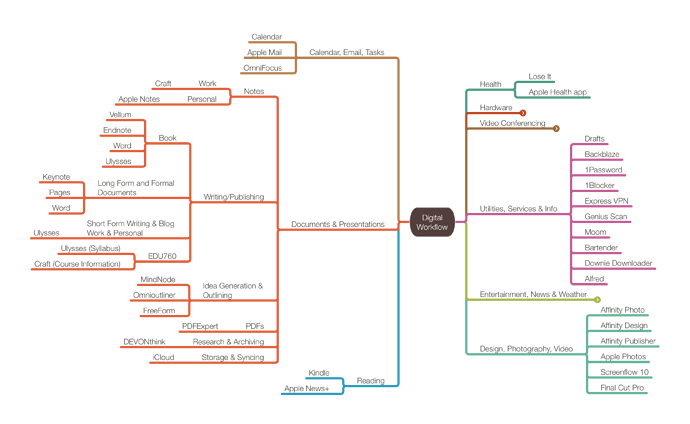 So there you have it. I gave it the “old college try” but in the end, my plan came up short.

I can only ask for the judgment of charity from those who have followed my saga.

Not knowing anything about the internal workings at Apple, I bet it is just a matter of resources devoted to each of these apps. Safari and Mail work well for me and I bet they have much larger and more experienced teams behind them. It is just impossible for one company to be good at everything, they have to prioritize and I’d prefer they prioritize the core OSs and hardware, which they seem to be doing.

One thing that I’m worried about is that I (like you) use iCloud for my cloud storage. I have not had any issues syncing files and folders. But I wonder why the syncing of Apple Notes is not as reliable as file and folder syncing? Is it a different technology behind the scenes?

I like your Mind map, I think I’ll create one for my own workflow.

Is it a different technology behind the scenes?

My understanding is that it is but that is way above my technical pay grade. I’m sure there are those on this forum who will know.

As to resource allocation, based on the improvements made to AN is the last couple of years, Apple seems to be devoting resources to the app. As I said in my post, AN is a great note app. It has its frustrations and limitations, like all apps., but its feature set and deep integration are strong. The Achilles’ heel is syncing—which is vital.

As to the mind map, I like it because it helps me visualize my overall workflow.

I wonder why the syncing of Apple Notes is not as reliable as file and folder syncing?

I wouldn’t say that one service is more reliable than the other.

I believe most of my problems with Apple Notes was the number of files and attachments that I had. Now that I use it mainly for quick handwritten notes I find it very reliable. OTOH I don’t store any files on iCloud because it rarely starts syncing immediately and I have another cloud service available that does.

Agreed. I wanted to use AN as a replacement for Evernote, however, sync was too unreliable. Surprisingly, even after living with Craft; I moved everything back to Evernote. I am also moving back to OF instead of AR. There is surely a psychological component to this, however, it just seems to flow better for me.

I had to turn iCloud off almost everywhere and only use Apple’s iCloud backups and syncing for things like contacts and calendar. I encountered too many issues and it eroded trust. That’s hard to win back.

Actually, this isn’t a new issue for Apple. It’s been around since MobileMe and .Mac/iTools era. They want to conquer services, so I wish they would focus more on iCloud, Siri, and Apple Music. That would solve so many of my gripes. I want it to “just work.”

OMG thanks for the MobileME flashback

MacSparky said back in MPU 535 that he’d been told when he asked that Apple Notes was built on different synchronization technology than other Apple products. Perhaps that explains why these long standing sync issues haven’t been addressed despite all of the other enhancements to Apple Notes. Getting sync to work right at scale takes a pretty specialized set of skills (I used to do this for a living) and it wouldn’t surprise me if Apple is not seeing finding engineers to do that as a priority for something only AN uses.

Anyway, that discussion was well over a hundred episodes ago. It’s sad to hear that it’s still not reliable. I respect your commitment to trying to make it work. I’m sorry that it wasn’t possible. It wasn’t for me either. I ended up with a variant of your workflow, but with Drafts between creation and DEVONthink.

MacSparky said back in MPU 535 that he’d been told when he asked that Apple Notes was built on different synchronization technology than other Apple products.

Why can’t AN sync on whatever system everything else is using?