All in all this monitor is OK.

Has some glare to it. This kinda bothers me.

The resolution is fine.

As with most monitors, keyboard shortcuts don’t work for adjusting screen brightness, which is a bummer.

Connecting the monitor to my iPad and MacBook is fine, I can use either the USB-C cable and/or the HDMI cable (this by either connecting it directly to the HDMI port to in my MacBook or with a HDMI to USB-C adapter to my iPad).

The 3:2 aspect ratio was also a point of interest for me as I wanted to see how the monitor would display my iPad screen. There’s some letterboxing but considerably less than with a standard 16:9 monitor. 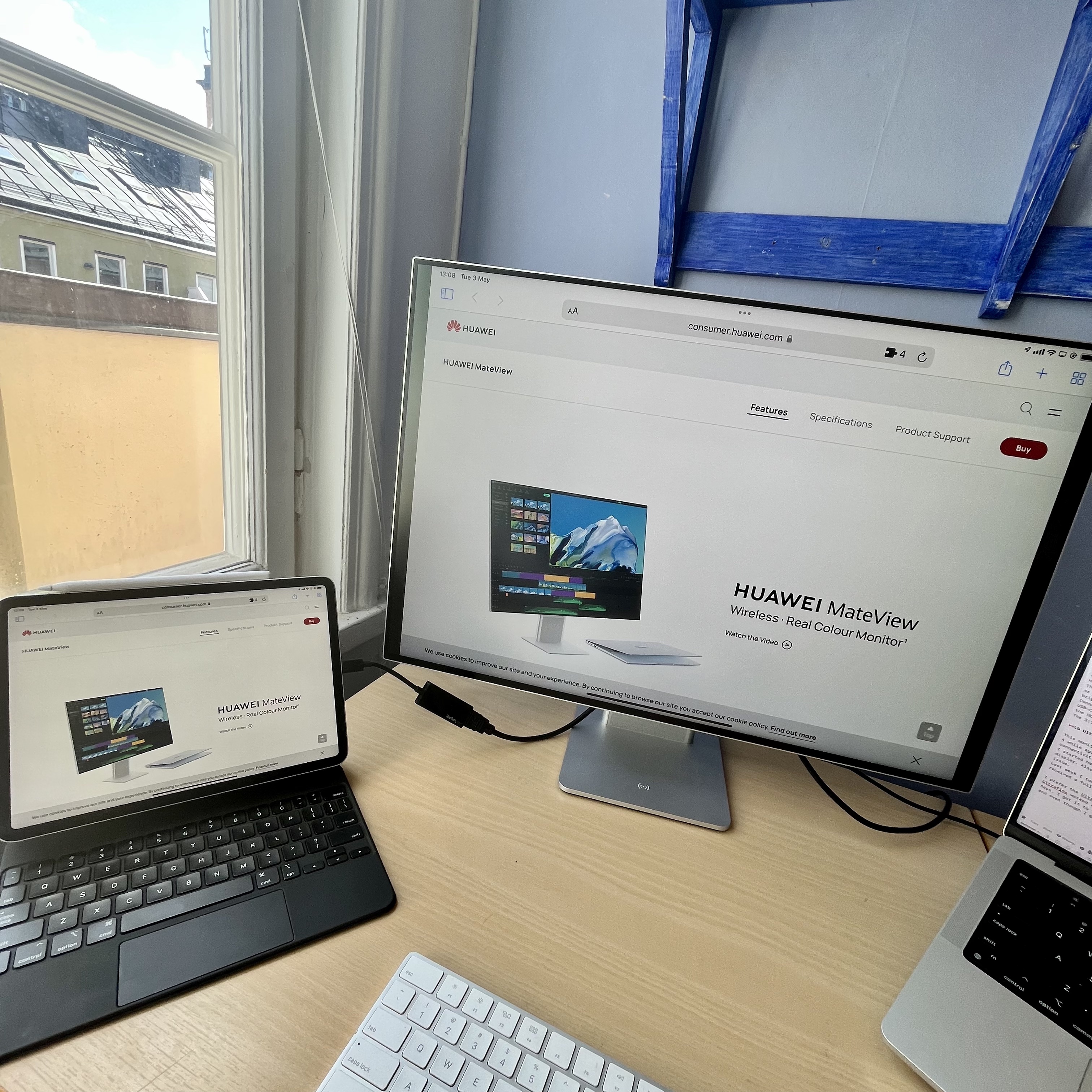 This monitor was easily the most fuss-free monitor I’ve ever had.

A while ago I started getting some of the issues others have, namely the the connectivity of the USB-C and Thunderbolt ports.

I started having issues connecting my iPad and sometimes MacBooks to the display. Also, hard drives would intermittently disconnect due to the same issue.

Last week I took the monitor to the Apple Store where I bought it from and received a full refund.

I prefer the Ultrafine over the Mateview as far as user experience when the Ultrafine worked as intended. I’m going to return this MateView in a few days. I got it to test it out in hopes of using it to replace my LG monitor and even though I got it at a discount I’m not quite satisfied with it.

I’ve now decided to lease a Studio Display, hoping again for a setup with less fuss with connections etc. I had the option to lease an Ultrafine 4K but given the lack of support for it at this point in time I decided to go with the Studio Display. I have the option to buy out the monitor after a few months to end the lease and I can imagine it being a lot easier to sell that monitor and not lose a whole lot of money, as opposed to doing the same with the Ultrafine.

Any updates on your journey? Planning on switching from an iMac to an M2 Air this summer.

As with most monitors, keyboard shortcuts don’t work for adjusting screen brightness, which is a bummer.

It’s more than 6 weeks late now…
I’ts a bit of a challenge being without an external monitor. I had had my LG UF 4K since 2019 and now I’ve been without a monitor for almost 3 months. I have a 14" MBP M1 which is better than the Air I had but I’m realizing again that I might want ‘need’ a 16" laptop anyway. I use the 11" iPad Pro with Sidecar but it’s janky and disconnects often. I’ll give an update once I get my Studio Display

Tried it but didn’t help. Thanks for reminding me about this though - I’ll try the app again, struggling with these monitors we have at my current office

Lunar for controlling monitors. You might want to give it a try for brightness control

MonitorControl uses Lunar’s code for controlling monitors on M1 so at the lower level the apps handle monitors in the same way, the limitations mostly come from the monitors or how they’re connected (hub/dock/adapter/cable used)

If you have any issues with it, let me know here or on Lunar’s Discord where I can provide real time help.

Thanks for sharing this! Testing it out now.
I got a 28" Lenovo 4K Monitor for temporary use for now until I get my Studio Display.

I wrote 4K, it ended up being a 2K monitor.
I used BetterDisplay and SwitchResX to alter some of the hidpi display settings though which worked surprisingly well.