A new computer came in the mail last week for me — but this one is a little different: 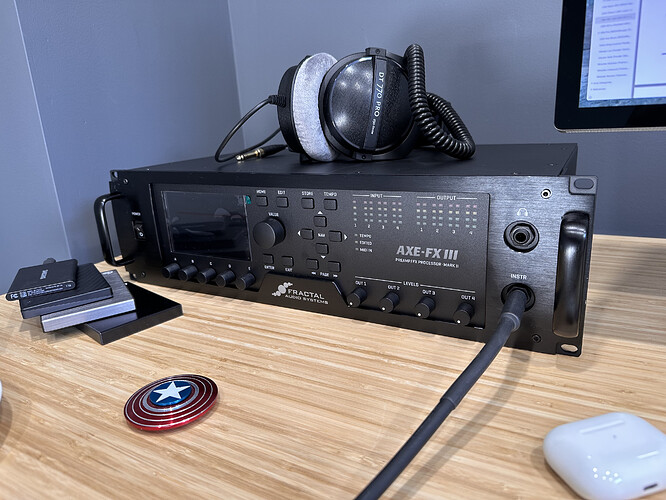 This is a guitar modeller — specifically the Axe FX 3. It simulates the sounds of hundreds of amps, speakers, and effects — and they can be paired in any which way. You send the sound out to PA speakers or reference monitors, you can record with it, it plugs into your computer via a USB B port (like a printer), and you can make your own sounds with it. Everything from the Metallica rigs to all the John Mayer rigs is in there (including Dumble models, if any of you play and are as fascinated by those as I am).

The whole thing is basically just a couple 1.0ghz Pentium processors with a bit of ram. You’re paying for the sounds, more or less, and the construction of the thing (which is meant to be put in a rack).

The software is really the trick here, though. Other guitar modellers take a “snapshot” of an amp at a specific setting. When you adjust the bass, middle, or treble (for example), you’re adjusting the settings of that snapshot. A little less bass than the captured image, or a little more treble. But you’re still pretty limited to that snapshot itself. That’s not how the Axe FX works. It actually models the circuitry of these analog tools, rather than the sound itself. So when you change the knobs, they respond the way a real amp does by adjusting the circuitry itself and the power going into it. It’s tough to explain, but completely amazing. Any sound you want in your head is possible, basically.

The Mac software it comes with for editing and creating sounds is… well, it’s special. Here’s a screenshot I just grabbed. The traffic lights are indeed on the right instead of the left. It doesn’t feel Windows-y or Mac-y. It’s just not great. But you’re really there to play guitar (and record guitar, and maybe plug in a bass and another guitar at the same time and jam with your buddies). 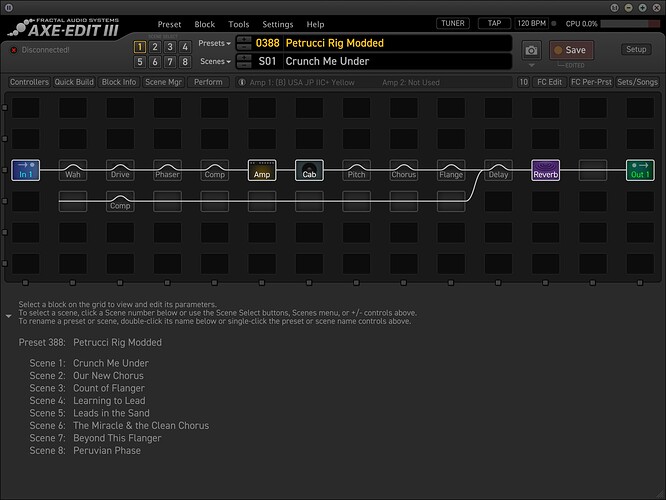 I don’t do any recording, so I bought this for my own personal use and for playing on the worship team at church. I’m a high gain player (I like the chugging metal sounds, like a teenage boy apparently), but this was a great way to get a ton of awesome metal sounds and a ton of great low-gain rigs for church. A buddy of mine came over last night to check it out, and he brought a bass guitar, and we had a lot of fun messing with sounds through this thing and jamming some R&B stuff together. And he didn’t need to bring an amp — I just set him up with a virtual rig in this thing, he plugged into Input #2 in the back, and we both outputted from the same speaker.

For those of you who play the guitar, this thing sounds different from my real tube amps. Much of the sound is predicated on choosing the right cabs to go with in, and when you pick a cab, you’re picking the sound of a recorded cab with a mic you’ve selected (like the 57, 121, etc), and a prescribed placement. You can mix a bunch of the sounds, but it’ll never sound the exact same as a cab. For my use though, given that I don’t want to crank my tube amps in my house, this thing ends up sounding a lot better at far lower volumes (since the simulated amps can be cranked without pushing the volume beyond 80db).

Anyway, I know this is a little different from what we normally talk about here, but this has occupied almost every waking moment (and some sleeping moments for me) for the past week or so. It was bananas expensive, and I feel bad spending this much on my hobby, and I feel even weirder buying a digital tool rather than a tube amp (which is all I’ve owned for twenty years). But it sounds amazing, and if you play guitar and have the means, it might be worth checking out for you.

I do not play guitar. However, I have spent time in the A/V industry and this kind of stuff fascinates me. I didn’t look it up, but I know how pricey these things get. Have fun playing and thanks for the explanation about how it works. I know magicians are very particular about “the real thing” vs “emulated”. From your explanation, it seems like this does a good job for the infinite combinations it has available. Very cool tech.

It’s really fascinating. You lose the “amp in the room” feel because it sounds a little more like a recording, since you’re playing a mic’d speaker (essentially). But the sounds themselves are all very accurate. You can use the device as an outbound audio DI as well on the Mac, so I’ll grab a recording of some of my favourite amps, select them in the machine, and A/B the recording and my tone while I tweak. You get in spitting distance. It’s pretty wild.

I don’t mind losing the feeling of the “amp in the room” — I’d rather hear what the audience will hear. So if it sounds more like a mic’d amp, that’s fine, because that’s how all recordings and live shows sound too. (And if you want to, you can connect this thing to a power amp, put it into a giant guitar cab, and get the amp in a room feeling back. I just don’t care much.)

But it was the conversion to CAD and the shipping that got me bad. Because this thing is used by musicians all over the world on tour (literally John Mayer, Metallica, Ghost, Aerosmith, Dream Theater, the list goes on), and it’s only available via direct shipping, they basically overnight it anywhere.

Still cheaper than three out of the four amps, and all four amps are profiled in this thing, along with hundreds of others.

The whole thing is basically just a couple 1.0ghz Pentium processors with a bit of ram.

This is interesting, as it shows the oomph that has what we now consider obsolete stuff, once you remove all the “modern” desktop operating system layers of abstraction and go to the bare metal.

Very nice rig! I enjoy reading about Mac users and Non Computer technology… after all, a Mac Power User is probably a power user of other electronics tools as well!