I have a workflow to append a note in Evernote. Works fine until I go into the note and make changes manually. I was wondering if anyone has encountered this problem and might be able to help me understand what is going wrong. 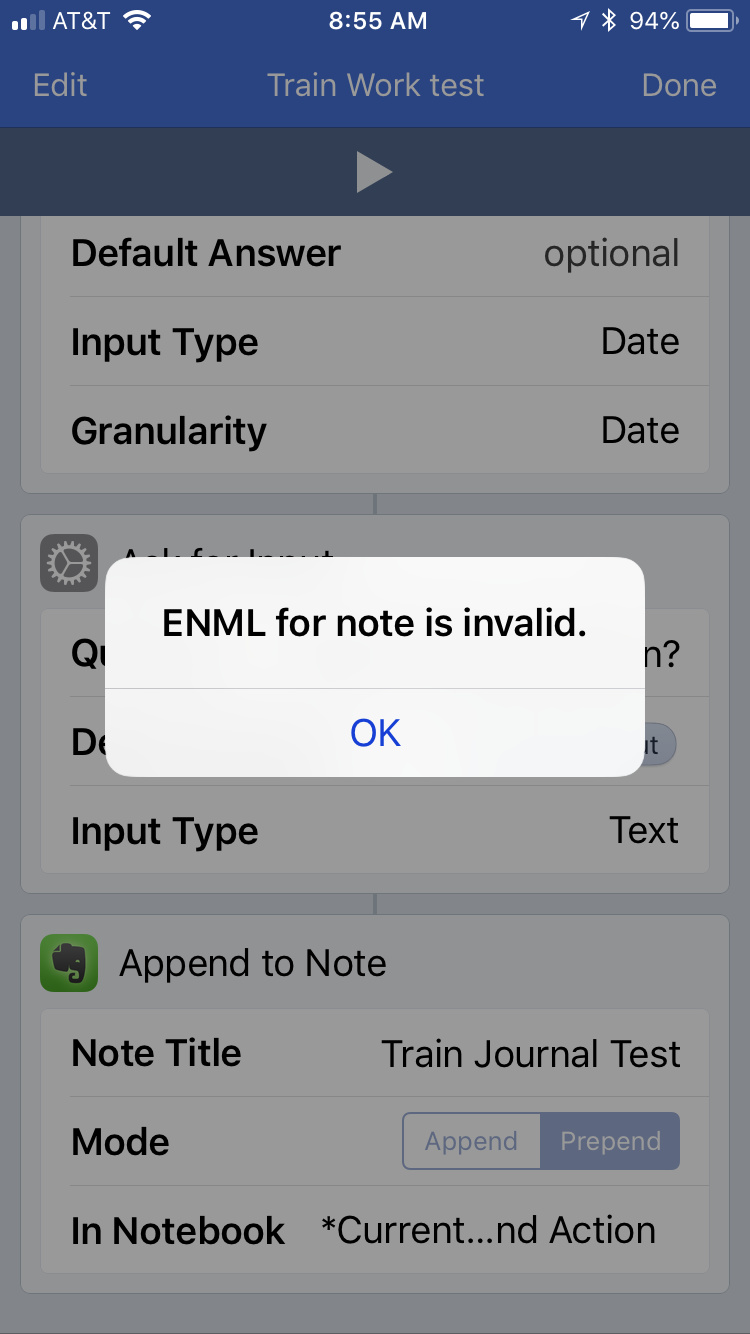 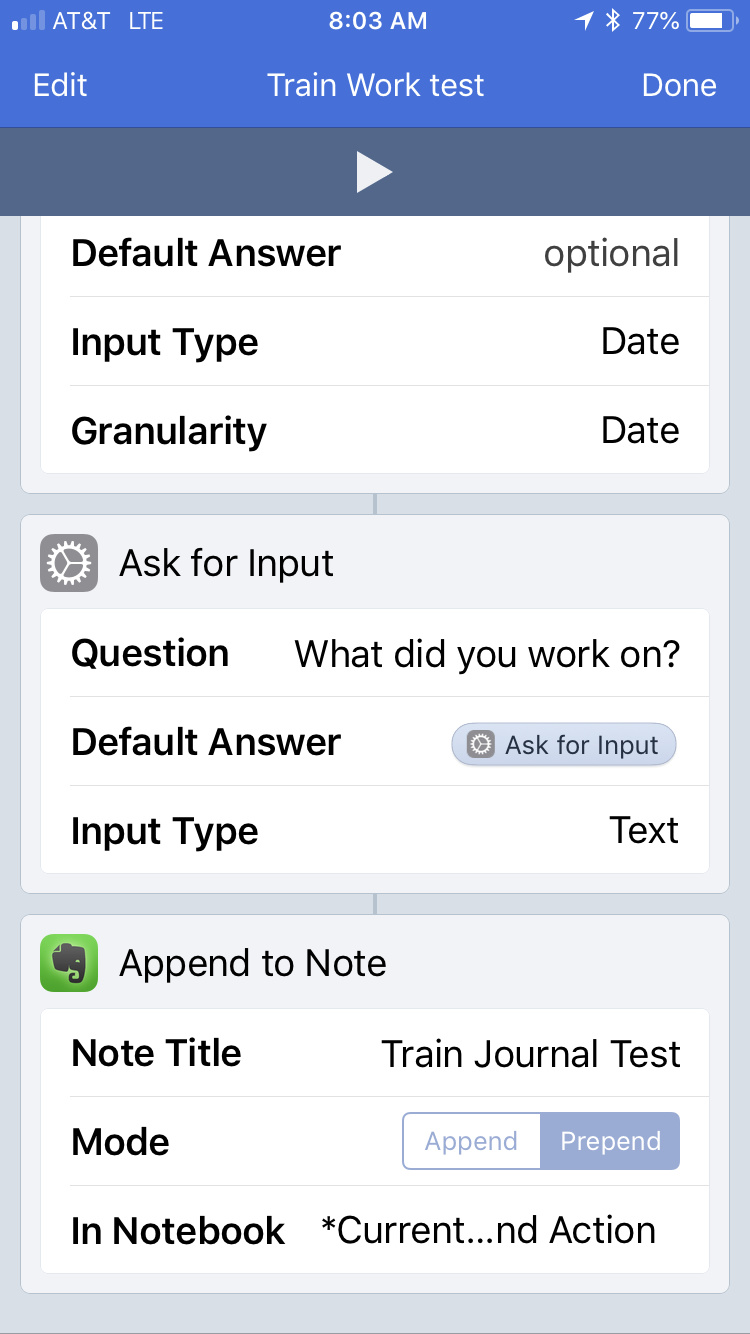 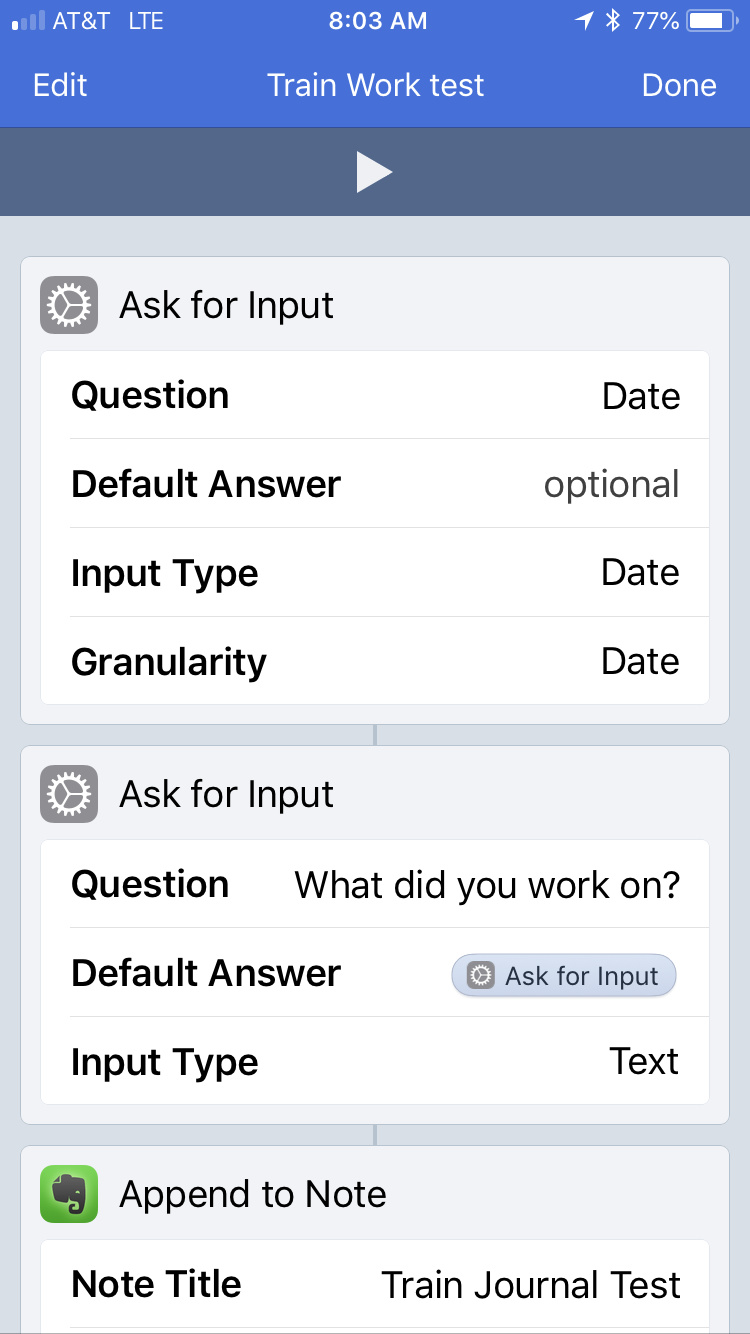 ENML is Evernote’s slight twist on HTML. The action that is getting upset is expecting ENML - and would probably take HTML. I’m not sure if you need an action to explicitly convert to HTML or not. It’s worth experimenting with.

(And the ENML it expects is your note contents.)

I replicated your workflow (see image) and it worked fine on my iPad and on my iPhone.

I do see that the name of your notebook starts with an asterisk (“*”). Have you tried with a notebook named something simple, like “Inbox”?

On a side note, I suggest that you change the title of your post to something which tells other users what the topic is about, e.g. “Need a little help with Evernote in Workflow” 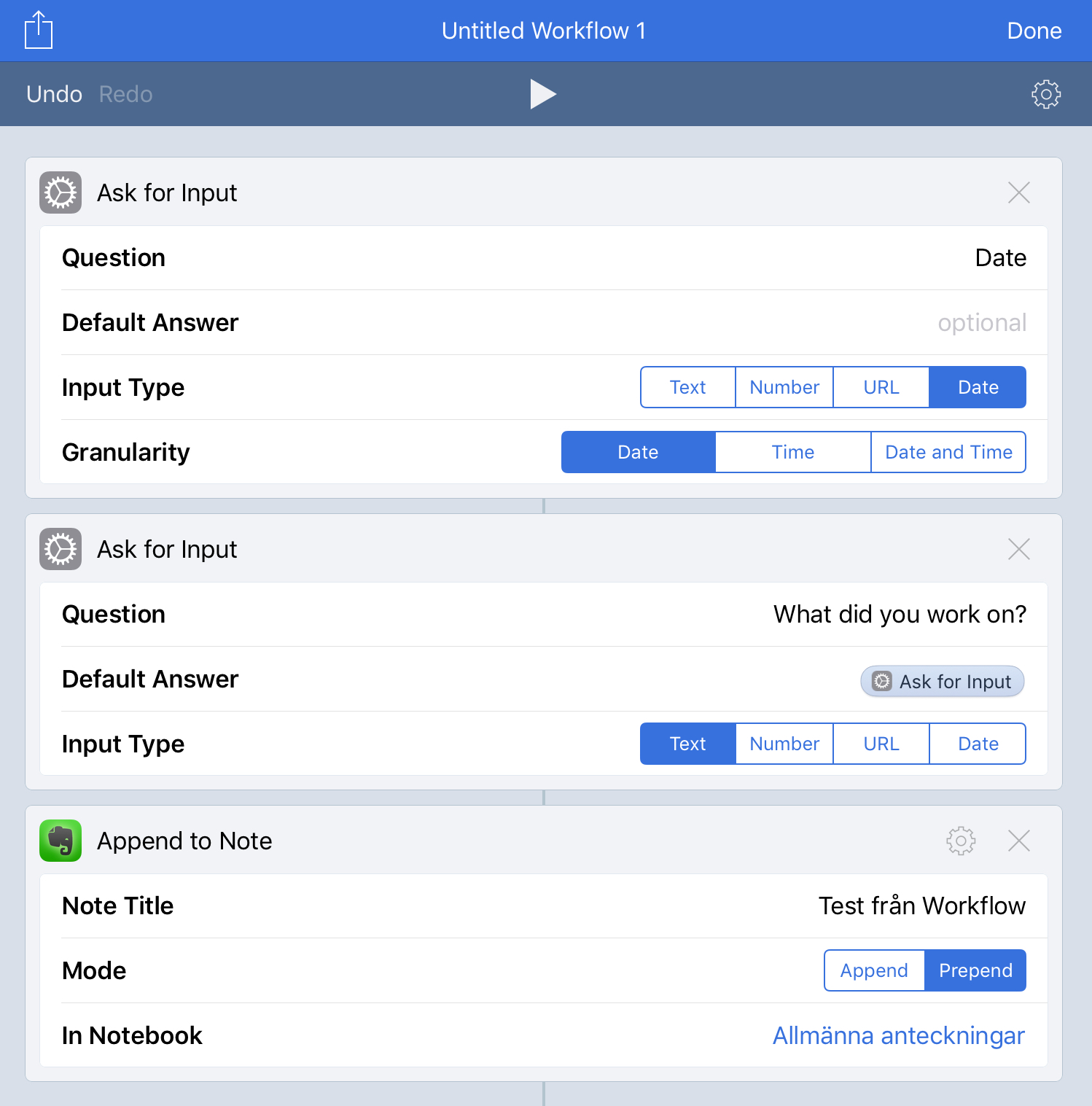 On my iPhone running iOS 11.4.1 with Evernote 8.15.1, I noticed that whenever the note name has spaces or special characters, a new note is created each time instead of appending or prepending the existing note (assuming it already exists of course).

As soon as I removed all the space characters in the note name, the Workflow workflow behaved as expected.

Did you notice the same issue?

Thanks! I changed the title of the post - sorry about that.

I changed the * to a zero, but it seems to be having the same problem. Everything works great until I go in and modify the note using the Evernote application. It seems once I modify the note, it no longer works. Has anyone else noticed that or maybe can try it?

I tried removing spaces but I had the same error after I manually changed the note.

Have you tried something really basic?

Make a new Workflow with a Text-block holding one word (“test”).

Thanks for trying and reporting back!

Did the workflow used to work and now it doesn’t or is it a new workflow that you’re just starting to build?

I say this because a week ago, Evernote released version 8.15 of their iOS app boasting a major redesign.

In the meantime, Workflow has not been updated for the past 5 months so this could explain the issues you’re experiencing.

@DamienSchreurs
Sorry for the late reply. I created a brand new workflow and had Evernote updated to the latest version.

Have you figured it out?

No, I can’t reproduce the error.

Do you still have the same issue?

If so, could you please let us know the following information?

Thanks everyone. I’ve been testing and it was working and then out of no where gave me the same error. I do go in and edit to add a week header and some spacing and formatting. When I do that, something breaks it.

Ok, so the problem seems to be that Evernote is misinterpreting the note you’ve generated when you edit it and saving it in a way that Workflows Evernote EML handler can’t understand.

Could you try adding a “Make Rich Text from Markdown” task between the final “Ask for Input” task and the “Append to Note” action see if that helps? I should add some extra tags around the text which may help Evernote keep the formatting correct.

The only other thing I could suggest is trying to append to the note rather then using the prepend mode, see if that makes a difference.

I tried the Make Rich Text and it didn’t work.

It’s fine until I try to manually change the note (I add space as well as bold and underline).

I will try addend and see if it makes a difference.

Changing to append worked. I appreciate everyone’s help with this and I think it’s time to move on. I can always use the workflow to enter the text into a new note and then cut and paste it into the journal note.

What I’m really trying to do: I simply want to capture a quick note of what I worked on during my morning and evening commute (typically from the train). I thought it would be nice to get this in a simple Evernote note with the newest on top.

I’m open to other ideas about how to do this!

Take care and thank you again everyone!

Drafts has an prepend to note option in it’s Evernote action (at least in Drafts 4 they do). You could try writing your note in Drafts and using an action in there to prepend them to Evernote Journal.

There are specific journaling apps out there (Day One for example) you could try, or you could try adding them to an Apple note, text file, calendar entry, etc. Is there a specific reason you’re trying to do this in Evernote? Not that it’s the wrong tool for the job, just wondering if you’ve looked at other apps?

I officially gave up on Workflow for this and now use Drafts 4. Although I still have to use Workflow to select the date. If there are any recommendations for this using drafts directly, I’d love to learn about them.

I call Workflow which has a date selection. Then it inserts the date into drafts. I type my text and then use an action to send it prepend an Evernote note. So far it’s working fine.

If you combined the Workflow date selection and append to Evernote actions into one task it might make it more streamlined.

So you’d enter your text into Drafts and run the action. This would use Workflow to prompt you to the date, add the date to your entered text (use a JavaScript action to alter the draft) and then prepend it the Evernote note.

If you combined the Workflow date selection and append to Evernote actions into one task it might make it more streamlined.

So you’d enter your text into Drafts and run the action. This would use Workflow to prompt you to the date, add the date to your entered text (use a JavaScript action to alter the draft) and then prepend it the Evernote note.

In your “Prompt for Date” Workflow add a “Generate Text” step which combines the selected date with the text passed into the Workflow (by default the contents of the draft) formatted however you like. Then add an “Add To Draft” step which runs you “Append to Evernote” action in Drafts.

Then you simply enter your text into Drafts and run your “Prompt for Date” action, you’ll be prompted for a date in Workflow, switched back to Drafts with the date in text and then your text should be added to your Evernote note!

You may want to set the “After Success” option on the two actions to “Delete” so you don’t end up with lots of Drafts being created, but that should work.