I’m looking for a good org chart application for creating organizational charts. I prefer a native app, ideally one for Mac and iPad. I’m currently using MindNode for this purpose but it’s not ideal.

Every place I have worked uses PowerPoint for that. So maybe Keynote?

Let us know when you find that unicorn. If you’re pulling contacts from Salesforce, LucidChart has an integration that cuts down on the typing and you can also import from Excel/csv. It doesn’t happen automagically though, some fiddling required.

Keynote, Pages, and OmniGraffle can do this – but, especially Keynote and Pages, getting the lines between boxes right is fussy and time consuming. If you insist on “native” then go with OmniGraffle – but don’t pay for a license if this is a one-time use case. Lucid is fine, but expensive.

Best price, and pretty good feature set for org chart and numerous other templates is draw.io, which has the online and a desktop app for free. Why’s it free? Who cares. It works.

Unless he can find a long term use, OmniGraffle seems a bit expensive just to make the occasional org chart.

Thanks but the chart I need to create is too complex and deep for Keynote or Pages.

I have OmniGraffle Pro but the problem is that I cannot collapse branches (at least I’ve not figured out how), which is necessary given the depth and breadth of the chart. I’ll check out draw.io. Thanks.

Maybe Omnigraffle as a subscription for as long as you need it?

I have Omnigraffle 7 Pro but I need to be able to collapse branches, which I don’t believe can be done in Omnigraffle.

I have OmniGraffle Pro but the problem is that I cannot collapse branches (at least I’ve not figured out how), which is necessary given the depth and breadth of the chart. I’ll check out draw.io. Thanks.

I have seen some “collapsable sections” on Draw.io (or diagrams.net) charts --specifically for process runways-- but I did not understand how to create or edit them! So I guess the capability is there.

I see where Bundlehunt has an app called MyDraw on sale, which claims to be able to do that… not familiar with it at all, so can make no recommendations pro or con…

OmniGraffle allows collapsing and expanding of subgraphs. Test: Create 4 boxes vertically arranged; connect a line between each; Select the lower 3 boxes; Arrange → Group as subgraph; You can then collapse/expand these. May not look or work as you wanted but maybe worth a look. Diagrams is a native diagram editor for macOS. With this productivity tool you can create beautiful, structured diagrams. Get it now on the Mac App Store and Setapp.

There’s a demo on the website, it sells for $22 on the Mac App Store and is also in Setapp.

I used a bespoke org chart program in DOS days Org Chart Plus if i remember the name correctly.It was terrific. But of course that old news. maybe they have morphed to Mac. Searching internet for “org chart software” brings up some candidates.

SetApp has Diagrams, but not sure if it would be extensive enough for you.

Specifically for an org chart I’d recommend looking at iThoughts or MindNode. The former has many diagram types, and the latter lets you turn a diagram from horizontal into vertical, and set the branch type to angular rather than wave.

@Bmosbacker Graffle is fantastic. But you also wrote you needed something that would fold/unfold. I believe you asked about “alternate” mind mapping software previously in another post. As I said then … this is one of those areas where iThoughts outshines MindNode. It has many more formatting options. And it’s much easier/flexible/powerful in how you fold/unfold nodes or groups of nodes.

I’m attaching part of an iThoughts document I’m working on. Most of the document is folded up. I was not trying to make an Org Chart but you could certainly tweak this style to more closely fit what you want.

@tjluoma @tonycr Thanks but I have OmniGraffle so I’m not sure that Diagrams provides additional features.

@Mathew_T_Mitchell this may be the answer. I have iThoughts but did not realize (mainly because I’ve always defaulted to MindNode and therefore have not mastered iThoughts) there was a way to combine horizontal and vertical layouts as shown in your example. The problem I ran into with MindNode is that once I selected the layout it applies to all branches. This resulted in a very wide chart, which when shared with others was very small and required zooming and panning to see. I’ll experiment with iThoughts. If I can add vertical branches as shown in your example this will significantly narrow the horizontal width of the chart. I’ll report back…thanks!

UPDATE: That worked! I spent more time with iThoughts and figured out how to create a vertical layout. Thanks for the tip! Although I much prefer the looks of MindNode I may default to iThoughts. It is more feature rich and I can eliminate yet one more subscription. 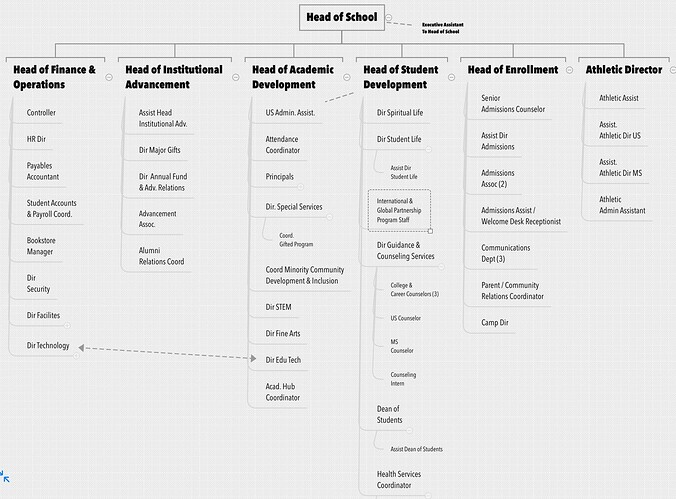