I’m pretty sure the configuration below should suit my needs and ‘future-proof’ me a bit. I don’t expect my future needs to change much from what I’m doing now, other than maybe light family video editing but that’s probably iffy at best. The only thing I’m not sure about is if I need the i7 processor and if I have enough RAM.

Any help would be greatly appreciated. Thanks!

I like what you put together and think the i7 processor would be overkill for your setup.

What Optical Disc Drive are you using for burning DVDs???
I have a SuperDrive but some CD and DVD discs I borrow from the Library have anti-theft stickers on them and snag in the ODD. Considering a tray loading Blu-Ray drive…

I’m also toying with starting at 8GB of RAM and adding more down the line but I feel a bit better getting more stock apple RAM than 3rd party (but that could just be in my head).

Also, I’m just using the SuperDrive for now, but if I end up wanting to burn Blu-rays i’ll just get a reasonably priced blu-ray drive and use that instead but for now I haven’t run into any issues.

I do all that you do on a 2011 server Mac mini, are you spending money needlessly?

It’s something in guilty of reading these forums…

If I were getting a mini to use as a desktop the i5 and 16gb of RAM are what I’d get. You don’t really describe your storage needs or what (if any) external storage you’ll be using, so it’s hard to tell if the 512gb SSD would be too much, not enough, or just right.

I think you’ll be happy with that configuration. Looks like what I’d get it I was going to replace my aged mini.

My last Mac mini was a 2011 model, so I keep computers several years. I therefore went for i7 16 Gb memory and 1Tb SSD when I got my 2018 model. Yes I can upgrade the memory but nothing else hence going for the highest reasonable spec. I’m v pleased with it and with dual Dell 24 inch HD monitors it is great.

When I’ve thought about this I’ve prioritised spec in the following sequence (from most important to least):

My use would be as a server, with occasional “end user” use. So in my mind I’m also going with 512GB, 16GB, basic processor. Not sure about faster Ethernet and also not sure if I want data on an external disk (other than as backup).

For grins, as DrP was seduced by an iMac

recently (maybe Pro but I wasn’t there so can’t tell), I’m thinking of an iMac as a possible alternative.

We’re definitely replacing a 2011 MacBook Pro 13” that is just used as a server now., But we also have a slightly younger 27” iMac that can’t pull the skin off a rice pudding.

Like David Hamilton on the Mac Geek Gab podcast said last week: try to max out your cores if you can afford it. There’s no way to add another cpu later on. 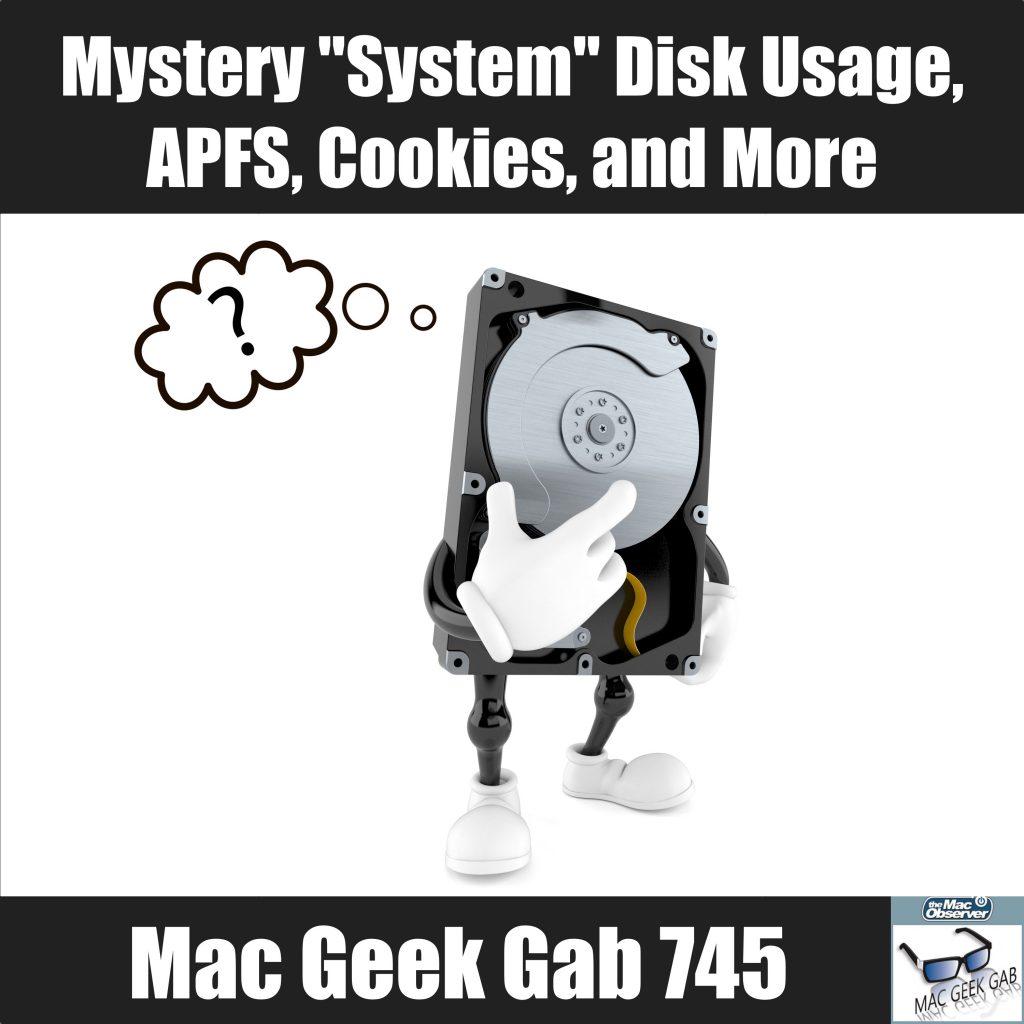 Mysteries are meant to be solved, and when it comes to the mystery that is your "System" disk usage as displayed by macOS, well, that mystery's not even supposed to exist in the first place. Dave and John dig in to solve this plus a bunch of other...

You can upgrade the RAM yourself (well, sort of), add external ssd’s, but you can’t replace the cpu. And going for a smaller ssd, with external ssd’s added might even save you more than the $300 needed for the cpu bump.

So if future proofing is your goal, and have the extra $300 for an i7, I would really recommend adding tghe stronger cpu.

The question becomes whether the processor will become too slow (practically, because they don’t actually slow down) before Mac OS support is dropped. In terms of future proofing. And at more than $2,000 per machine future proofing is key to me.

just for background information I would recommend listening to the MGG episode, Dave really explains his reasoning very well, and in this case I agree with him.

I would recommend going for the i7. You can take only 8 GB RAM and put the money into the CPU. RAMs will get really cheap in 2019 and you can upgrade them anytime. You can also take 256 GB SSD, its twice as fast as the 128 GB SSD but only a little slower than the 512 GB SSD. And you can add super-fast external SSD.

How fast is “super-fast external SSD” vs “built-in SSD”?

I’m a new mac Mini owner as well, but I found this thread because I’m looking for an optical disc drive. I can’t seem to find any USB-C drives that don’t look like suspicious China-knock-offs. Let me know if you find something.

What is a real world use case that would really take advantage of having the i7 with hyperthreading vs the i5? I’m not sure what type of software would really use the added features of the i7.

Video encoding, rendering, compiling, data analysis. I use my “server” Mac mini to offload a lot of tasks.

I just wish Final Cut and other programs had better cluster/group support (and a Linux client for that).

Pure longevity…
You can’t upgrade the cpu, so max it out if you can

You can’t upgrade the cpu, so max it out if you can

But unless you’re adding more physical cores, Apple’s CPU upgrades generally don’t increase performance much (and adding more cores only helps with multicore workflows). So while you’re stuck with what you get, getting a better CPU doesn’t necessarily get you meaningfully better performance.

I know, but it might just give you one more year of joy working on it

that’s the spec I would go for. upgrade things you can’t do later NOW, (like processor and storage) and upgrade RAM later.

I’d go for the 6-core for sure, and a minimum of 512GB of storage. RAM you could get by with 8, but I personally wouldn’t get 8 without planning to upgrade to 16GB fairly soon.