I think Castro and Overcast are pretty close since Castro launched 3. I used my laptop to record a HomePod playing the first 30 seconds of the recent Talk Show episode, first from Castro and then from Overcast. Castro: enhance voices, trim silence, 1.7x, Overcast: smart speed, voice boost, and the speed option immediately to the left of 2x. https://f000.backblazeb2.com/file/mpu-cornchip/overcast-castro-talkshow-comparison.m4a

Overcast does seem to have less lag in Airplay starting and stopping (unsure if an AirPlay 2 advantage.) On the other hand, Castro has mix to mono which makes a couple of otherwise great podcasts tolerable listens.

Thanks for that! I really appreciate the comparison.There are definitely very similar. Overcast has a little more clarity in the vocal range that I appreciate, as it makes voices easier to follow when sped up.

With that said, I think the gap has closed since I last checked them out and a better UI might be worth a switch.

After a few days I’ve hit the Mark as Played button when I wanted to add an item to a playlist 4 times. I’ve then had to go and download the episode again.

Many years of Muscle memory ignored.

To give you a comparison, the switch of the Safari address bar to the bottom on iPhone made sense, this completely doesn’t.

Guess I need to test out Downcast and Castro again.

@geoffaire I disagree. I prefer the change. I have never used the Add to Playlist Button, but have always wanted a Mark as Played button. I prefer having the Mark as Played button readily accessible and am fine with Add to Playlist being buried under the “more” button. Of course, not everyone will agree, but it would seem that Marco believes that most users fall on my side of that. By-the-way, he did a writeup explaining his changes, where he states that the Mark as Played feature was “[b]y far, Overcast’s most-requested feature.”

I read the writeup, in the end it’s Marco’s product and he can do as he wishes. I can also choose which podcast player to use and who to give my money to. I was a very happy customer since day one. I scrutinise all of my subscriptions as they’re due to renew, and Overcast was never even a thought to stop but as of this week I’m an unhappy customer.

Each to their own and I’m happy you’re happy. What Marco obviously never considered is that people don’t request features that are already there, how many people are happy with the new arrangement v how many are now pissed off that a feature they use a lot has been hidden away and/or that they regularly mark things as read that they didn’t want to. I would have preferred him to add Mark as Played under a right swipe or offered the player the option to delete or mark as played under the left swipe while not altering what was there. After listening to Marco since Build and Analyze, I don’t think he’ll walk back this change even if he were to think he’d made the wrong choice.

I’ve downloaded a few different Podcast players and have cancelled my subscription renewal to Overcast. A piece of software shouldn’t make me this infuriated, especially not when I use it multiple times every single day for 8 years. But ho hum.

Have you tried setting Settings > Delete to after 24 hours? That’s what I have and if I accidentally tap on Mark as Played, I can undo it with another tap of that button (no need to redownload). With 24 hours, you should have lots of time to catch and fix the mistake. And the “played” episodes are deleted after 24 hours, so you’re not filling up your phone with too many played episodes.

By the way, I have always had that setting configured that way, so it never even occurred to me this could be an issue. However, after thinking about it, I see how that could be annoying for someone who has it set to “When Completed”. I can see an argument for not having Mark as Played be so easily altered when set to “When Complated.” The swipe right option makes much more sense there. Unfortunately, Marco seems to have implemented both ways (swipe and tap button) without any customization options.

I find that triaging works well in Overcast, particularly with the new Recent area on the app homescreen. I just accept that an individual episode can live in multiple playlists, including the “All Episodes” playlist and, if I add an episode to the Queue manually, that playlist too.

It’s my perception that Overcast audio is better, particularly when listening to podcasts speeded up beyond 1.5x or so. But I haven’t done any kind of scientific study, and I have moderate tinnitus so my perception on this might be something other people should discount.

His biggest request was to add a second kind of episode clear to that button bar? That’s a lot of real estate for two similar actions, that most people will only use one or the other of.

By-the-way, he did a writeup explaining his changes, where he states that the Mark as Played feature was “[b]y far, Overcast’s most-requested feature.”

Lots of discussion on the latest episode of ATP as well.

I’m really unhappy with the Overcast update. It looked much more clean and uncluttered before.

It looked much more clean and uncluttered before.

As someone who never uses playlists, I wish I could just hide those two giant buttons on the top. 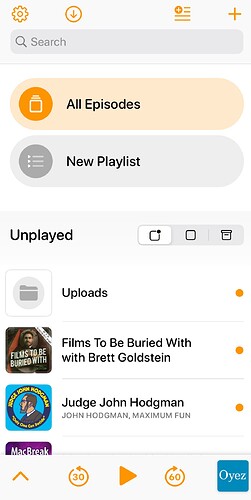 I like the new arrangement of the section below that. Unplayed is what I want to see 99% of the time. I like being able to get to “Active” and “Archive” with just a tap to find additional episodes when I’m out of content.

I wish I could just hide those two giant buttons on the top.

So, uh egg on face, you can. All I had to do was slide each button to reveal a delete option. 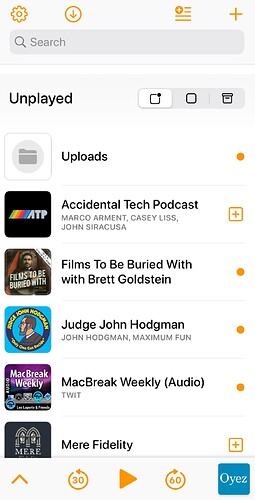 This is pretty much the layout I want, so I don’t see any issues for me at this point.

Nice to meet another member of the Merrie Band™

I’ve moved to Castro, it works very similarly to the way I was using Overcast.

The inbox is my all Podcasts view. I have certain podcasts going straight into the Queue, others I add manually.

I prefer the way triaging works in Castro, but for some reason, podcasts refresh (new episodes show up) much faster in overcast.

I almost never leave the All Episodes playlist. If I hadn’t seen this thread (and, eventually, heard the discussion on ATP), I’m not sure I would have known anything had changed.

I also find it really weird that Overcast does not let you import local audio files for playback. Downcast does this really well.

It does, it always has for subscribers. I think you have to do it through the web at overcast.fm though.

yes that’s ridiculous. I mean import locally as in the files are on my iPhone (files, nextcloud, etc) and I want to play them with overcast not upload them somewhere else.