After 10 years with OmniFocus I’ve found myself using Things 3 for the past 4 months, largely because I was frustrated with the lack of multiple tags on OF Mac. There’s a lot of things I like, the magic plus button (I know OF has something similar, but it’s not quite as smart), I love checklists, headings within projects, the today view with the calendar and separated evening tasks, the way it counts down the days left if you add a due date, and the design is stunning.

I was all set to go all in on Things and buy the Mac app until OmniFocus for Mac was released this week and I’ve spent the day kicking its tyres, although I still don’t think the design is as nice and as calming as Things it is a huge improvement and it has one big feature that is missing from Things, perspectives!

I’m back to thinking about jumping back to OmniFocus, but starting afresh so it’s doesn’t become an out of control monster. I need it to work for me and not feel like I’m constantly tending, and overwhelmed by, a huge database of overdue tasks, I want to avoid the ‘due bomb’ where at 5pm every night everything turns angry red because I didn’t happen to get to it, I’m hoping with the use of the forecast tag and less due dates, that tasks will simply roll into the next day. Does anyone have any good strategies for starting again, but keeping my archive of tasks around? Shall I just call OmniFocus bankruptcy and delete all the existing contexts (tags), perspectives. projects and tasks that haven’t been updated for a few months?

It is totally different from the first edition of the guide. No reused content at all.

Super! I might pick that up this evening, hopefully it might give me some inspiration for my new set-up.

I would export your current OF DB as a OF document, then you can still open it (side by side with a new database) for reference, but starting over if you’ve been using another task management system might well be best - or importing the contents of your Things DB into a clean OF DB will be a better start than a mix of things anyway. 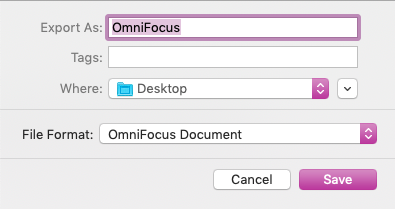 As a personal rule I only assign due dates if there’s a consequence, e.g. Library books have to be returned or renewed or I need to pay a fine. This page of the web application I’m writing needs to be finished by 2pm Monday because at 2:30pm I have a meeting and we need the page. “I want to get this done ASAP” gets a “Next” tag and sits in my Forecast view

Continuing the discussion from OmniFocus, Things and the OmniFocus Field Guide:

You say you don’t assign due dates. Do you have a way of setting when you want to work on something? (I use Due Date for that, but I’m not entirely happy with that as I often don’t actually work to plan and have to do bulk changes of Due Dates).

Thanks @RosemaryOrchard that’s a great tip to export the database. I read about your use of a ‘Next’ tag in your Mac Stories review, intriguing. Presumably you limit how many tasks have the ‘Next’? My old OmniFocus workflow involved a ‘Today’ perspective which had flagged and due items. Do you also have a ‘Today’ perspective or are you mostly working out of the Forecast?

Bulk editing Due Dates at the end of the day was one of my biggest problems with OF. In the past I assigned Due Dates to make sure tasks didn’t drop through the cracks in OmniFocus. More than ever now that’s not a good strategy for me. For the past few months In Things I added tasks to the Today view, if I didn’t get to it in the day it didn’t matter as they just rolled over into the next day, no angry red circles and now need to edit those due dates. My aim now coming back to OmniFocus it to avoid the angry red circles as much as possible, that is unless as @RosemaryOrchard says it has consequences.

I use due dates very sparingly, for things that must be done on that day. I have also started to set the Due time to 14:30 or 15:00 so I will get the reminder in time to act, and not get a nasty surprise just as I’m packing up to leave for the day.

Best way I have found to keep things from getting out of hand is to review regularly. Not that I manage all of the time though…

I might be have misheard but I thought that on a recent Omni Show podcast episode the devs mentioned that you could turn off red overdue coloring (though no mention on due date being altered).

I tried googling to find confirmation of that, but failed.

Hmmm… I found a setting to turn off the colours for the overdue, due soon and first available text, but can’t see anything in the prefs for the circles.

I’m a compulsive task-manager switcher, and have switched from Things to OmniFocus and back several times this year. It’s a bad habit, and one I need to break. I’m now on OF3 and hope to stick with it.

However, Things 3 is great too and I can’t think of a good reason to switch off of that to OF3. OF3 is a little better in its support for saved searches, which Omni calls Perspectives, and attachments on tasks. I sometimes add images to tasks.

On the other hand, Things beats OmniFocus for simplicity.

I do not recommend anyone switch from one to the other unless that person has a very specific need.

Ok now to answer your question: There is no easy way to switch from Things to OmniFocus. There are scripts available on the internet; google for them. The scripting situation seems to have improved significantly since I switched just a month or so ago, so I will not point you to the script I used. The script I used did not migrate dated or recurring tasks; I had to do that manually.

One month after moving from Things to OmniFocus, I feel like I am just now getting my task list to the state of organization it was under Things. And that’s pretty disorganized, which is one reason I switched.

I found a setting to turn off the colours for the overdue, due soon and first available text, but can’t see anything in the prefs for the circles.

Oh well. One thing Federico Viticci found was an apparent annoyance related to custom colors being removed when tags are added: 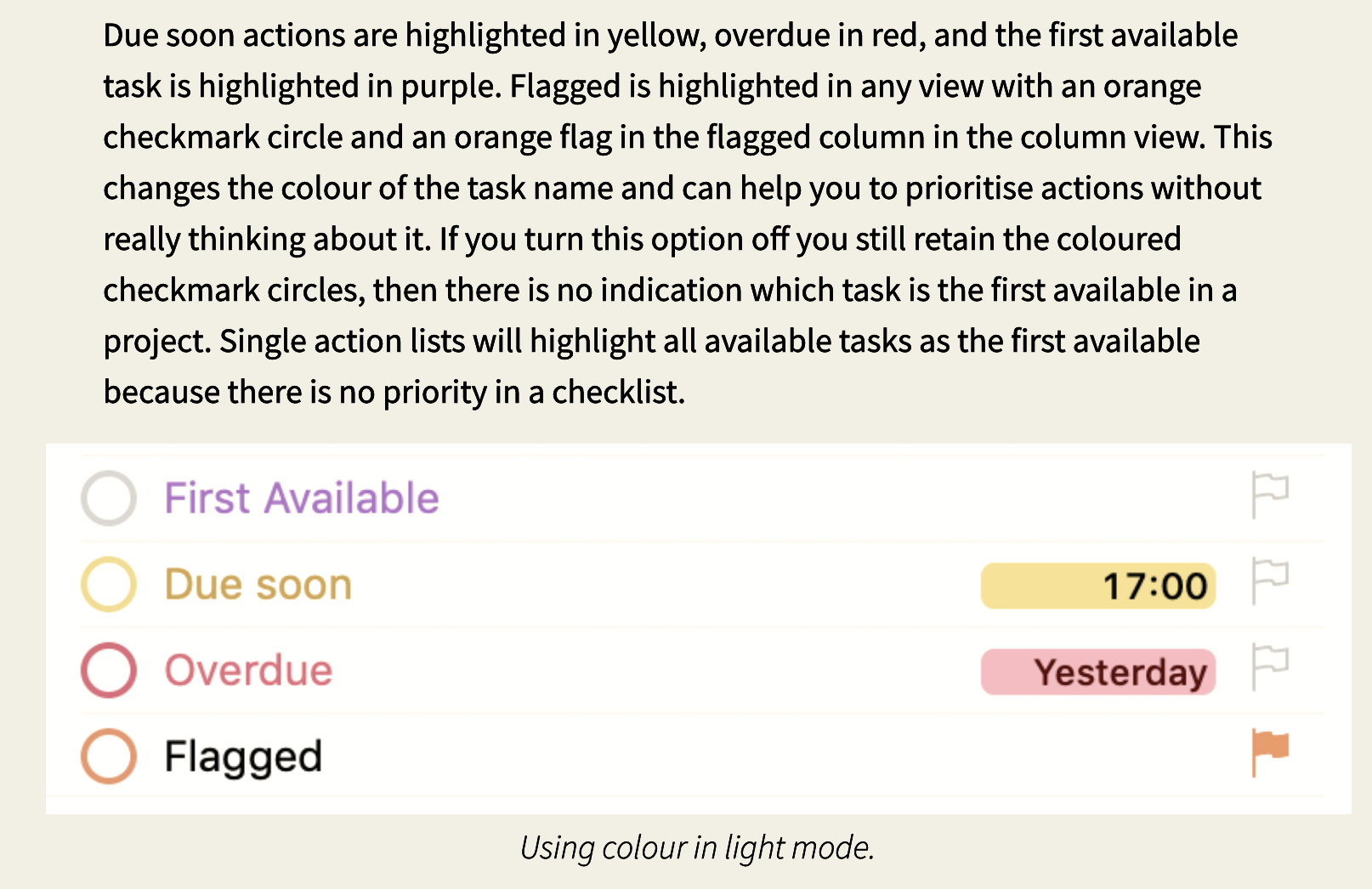 Oh yeah, just tested that out, it does look a bit odd, but I guess any of the actions could potentially be done next.

Oh well. One thing Federico Viticci found was an apparent annoyance related to custom colors being removed when tags are added:

I wrote that article, and I wasn’t annoyed by this

The colours of the circles are always there - it’s the colour of the tasks themselves that get added or removed.

Do you also have a ‘Today’ perspective or are you mostly working out of the Forecast?

Yes! I do both, if I have lots of due (soon) tasks I tend to work out of the forecast perspective, but otherwise I use a today perspective.

I picked an arbitrary number as my limit for my Next tag, 7. It’s not too big, not too small, and prevents the list becoming overwhelming.

I wrote that article

@leanda If the new FG doesn’t help you out, let me know and I’ll make it right.

The thing for me with making this new edition was I found myself completely changing the app as well. While the new version teaches a lot of the basics and how to use the app, it also goes into details about strategies and systems, something I really didn’t cover before.

starting afresh so it’s doesn’t become an out of control monster.

I need it to work for me and not feel like I’m constantly tending, and overwhelmed by, a huge database of overdue tasks, I want to avoid the ‘due bomb’…

Sometimes, we have to find the habits, strategies, or system that will help us focus on what needs to be done. If you miss something, another thing will break. it wouldn’t matter if it was Things, OmniFocus, or another app.

The OF Video Field Guide is a great place to start in learning about concepts and habits that you can pick up.

I recently switched back to OmniFocus after a couple of months as a Things user. I found that Things got messy when I had a lot to do at work. Watching the Field Guides now. Really great so far.