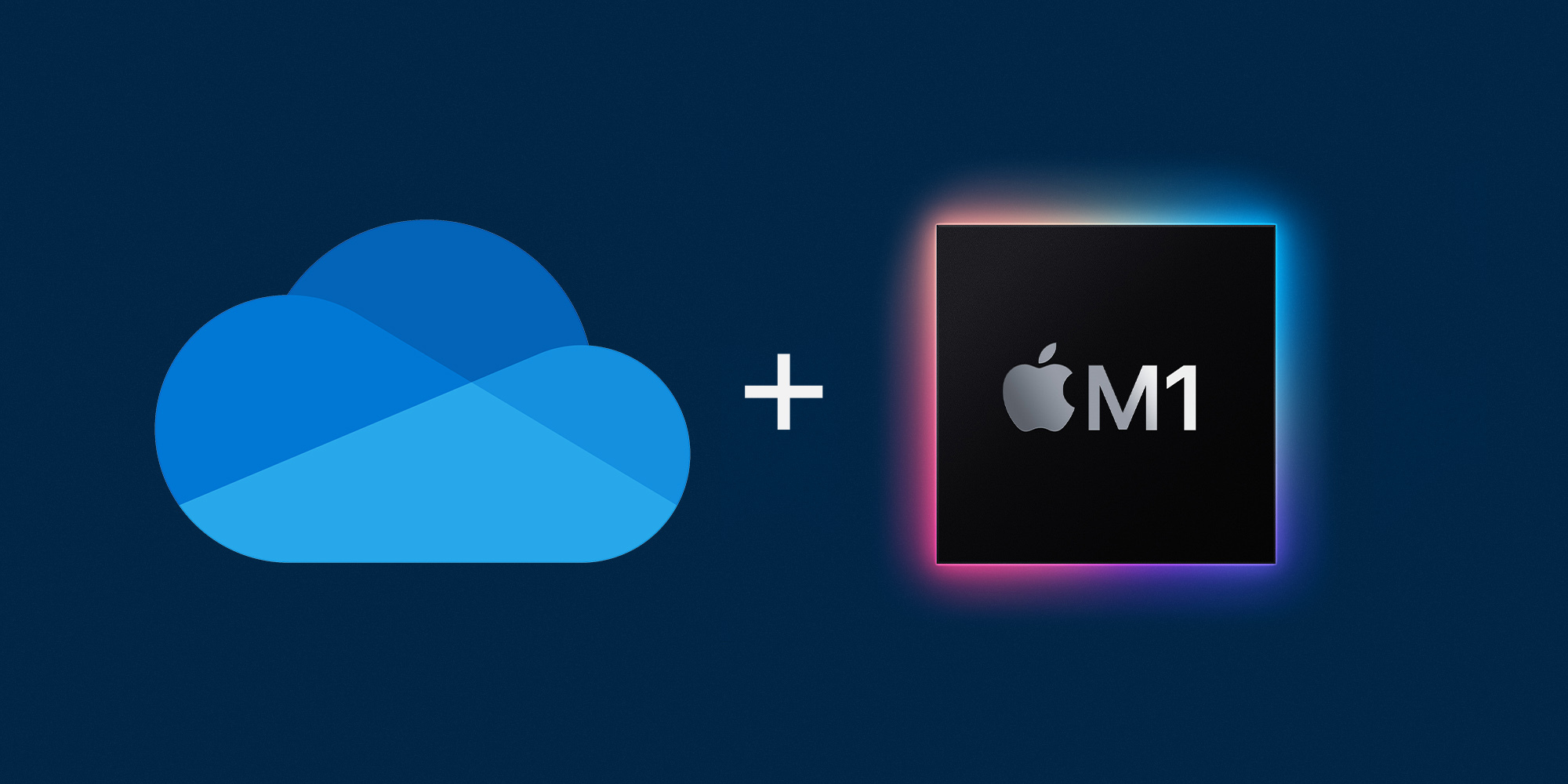 Microsoft announced today that OneDrive sync is finally available as a public preview for M1 Mac users as well as Windows on ARM.

Now the only non-M1 Native app in my list is the ScanSnap Home.

Microsoft has been far better with the transition than I ever expected. Kudos to them.

For some reason the app reverted to Intel.
According to this blog post from Microsoft, the Apple Silicon version should be 21.245xxxxx or later. 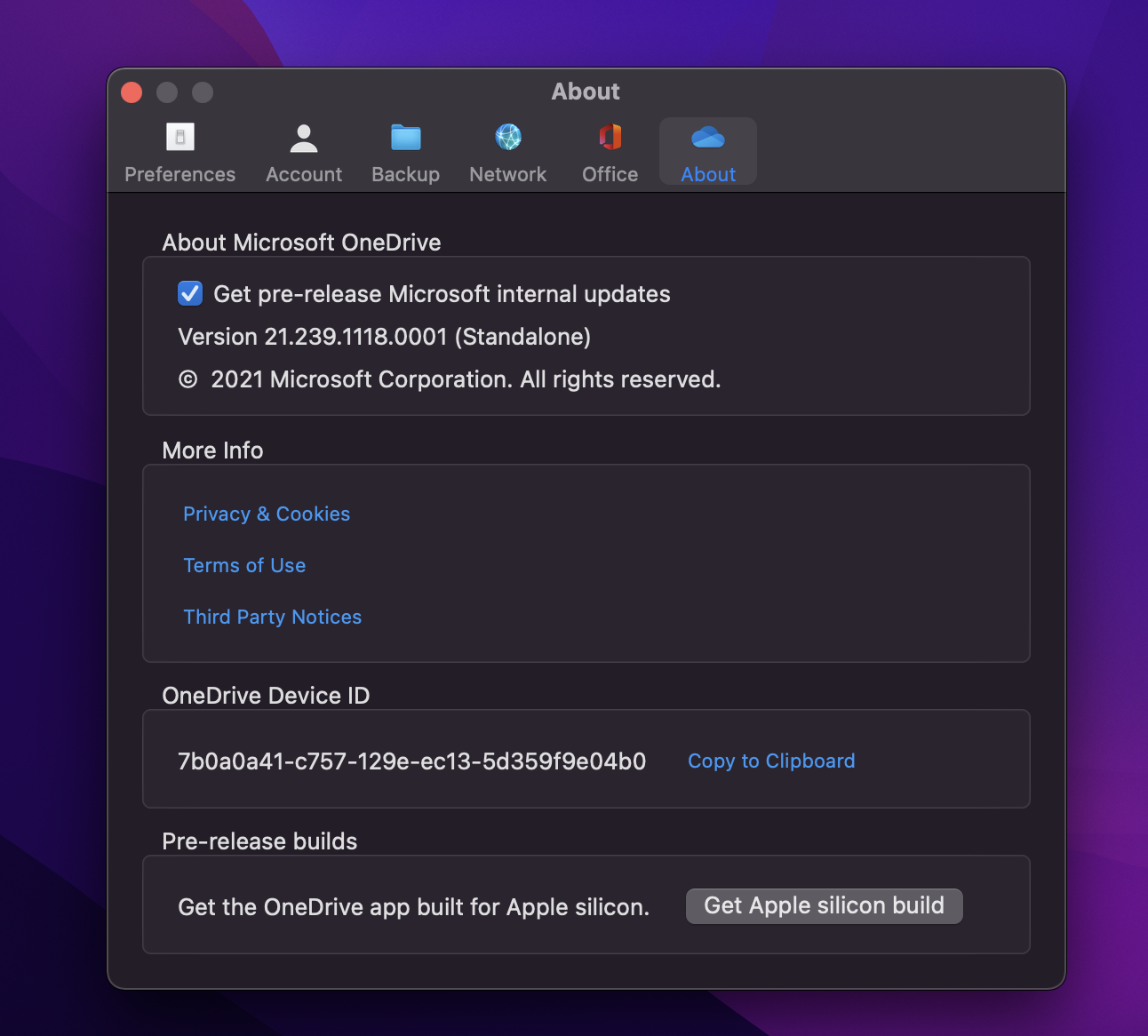 We’re excited to announce that OneDrive sync for Windows on ARM and for Apple silicon is now available as a public preview!      We know this has been a long awaited and highly requested feature, and we're thrilled to make it available...

A representative said in the comments that if the update does not show up now, it’ll be updated by the end of the week for everybody.

I’d settle for it launching every time and still knowing where its own folder is.

I’ve been using OneDrive as my main cloud storage for over a year now, half of that time on an M1 MBP… seems to “just work” on my end. Or maybe I just haven’t encountered the issues yet

Have you had any issues with high OneDrive resource usage? Both in memory consumption and CPU. I was finding that after running OneDrive for a day or so, it was using over 1GB of memory, which to me is a lot.

I have 3 instances of OneDrive open (1 personal and 2 business) and totals about 1.5GB memory.

Thanks for the reply. OneDrive memory is not a problem on my desktop with 40GB, but is a big problem on my M1 laptops, 8GB and 16GB. Especially since I need to keep Excel, Word and OneNote open at all times.

Hopefully next year, we will see M1 MBA’s with 32GB options

Hopefully next year, we will see M1 MBA’s with 32GB options

Not to pick on you @Nick_Fulgham, but why does “everyone” seem to think MacBook Air is going to get more memory, more storage, bigger screens, redesigned chip etc? It’s a (relatively) inexpensive entry level machine! Could stay like this for a while and would still be a fabulous machine!

No worries about picking on me! Only reasons I mentioned that is I saw several recents articles that postulated the possibility. My second option is the new MBP’s, but I have no need to enhanced GPU capabilities and I don’t like the form factor as much. I just need a lot of memory as my typical workflow has 10+ apps and 100+ tabs open at all times.

Well, I just counted and I have 13 apps in my dock, including a stuffed EagleFiler app and Affinity Photo. I do have much better tab discipline than you. (100 tabs! Wow!) The compact layout of Safari starts to look crowded to me after five or six tabs. Activity monitor reports 10.8GB used, 4.5GB cached, 11.8MB swap. That was MB (megabytes swap). Not bad for a 16GB M1 MacBook Air!

Nope, but I only have ~30GB of data in it so far. But even fresh clones of my entire OneDrive haven’t shown significant resource usage.

One thing I’ve just noticed is that it moves the location of the onedrive folders into library so it’s not longer indexed by spotlight?

Edit: seems it’s a change with Monterey to bring files on demand for everyone. Currently screwing up Alfred

Edit: seems it’s a change with Monterey to bring files on demand for everyone. Currently screwing up Alfred

Yes, I noticed the same thing for Alfred and Hazel too. Here’s how I fixed each one:

Edit: I also reindexed the OneDrive folder in Spotlight, I don’t know if it helped in anything, but doesn’t hurt either.

I figured that out after looking on the Alfred forums.
Restarted the whole of spotlight indexer again.

Have seen a big drop in memory usage with the apple silicon version.

Thanks for the positive feedback.

Question: I am not seeing the option to join Insiders Preview. But I downloaded all of my Microsoft apps from Apple’s App Store. Do you think that is the difference and I should re-download directly from Microsoft?

I imagine this is the case if you’ve retained the default location?

I didn’t notice this when I upgraded, but I have Onedrive to download and use a folder on a USB connected SSD with files on demand on (though in fairness, the SSD has plenty of space, so really I should just download it all!)

Quite possibly, I left in the default so it gets picked up by time machine.

You need to download the non-app store version, opt into the insider build and then select the apple silicon version!

Odd, my OneDrive is actually located at /Users/username/OneDrive. Did you download OneDrive from the Mac App Store? I used the Microsoft_Office_16.55.21111400 installer from MS.