Although I probably already know the answer (“depends on what you will be doing with the computer”), I am still soliciting opinions.

I am likely to place an order for a Mac Studio tonight. I am presently using my M1Max 14" MBP, which I am quite happy with. However, I have been using it on my desk, docked to external monitors, probably 90% of the time or more. I am strongly thinking about a Mac Studio for desktop work, so that the MBP can live in my work bag and require a bit less cognitive dissonance in carrying it with me. (Yeah, first world problems.) The MBP is presently my only computer. My wife has an M1 iMac but I use it only when helping her with her work, and it is located in a different room.

I have decided on a Mac Studio instead of a Mac Mini on the basis of future longevity and most importantly connectivity. I have three monitors, which makes the mini unsuitable short of DisplayLink for the third monitor, which I suppose I could do, but I also do a fair amount of image processing, so I’d just as soon go with the Studio.

I will go with an M1 Max 24 core graphics processor as I do not feel I need more graphics cores and the M1 Ultra is overkill for what I do and hence not worth the doubling of price. I will upgrade to a 4TB internal drive as I currently have nearly 2TB of “live data” (eg not including my music and movie libraries which live on my Synology and not including archival storage, also on the Synology. Yes, I know I could use an external SSD to save money, but after costing it out, the price difference does not override the convenience factor, so there it is.

My biggest question is 32GB vs 64GB. Frankly, I don’t want to spend the extra money as this is already getting pricey for something I wasn’t really planning to buy when I got the 14" MBP, BUT if there is a good reason to think I will need the 64GB over the next few years (I suspect not), then I will go ahead.

I guess I already know the answer, but I always like to hear thoughts from others here, as often times my thinking is changed when I read others comments.

I’d suggest the cognitive dissonance will be greater from having to switch devices occasionally. The second one will never have exactly the same software, or the same app settings etc.

How about selling the current 14" and getting a totally maxed out version? Plus perhaps a nice Thunderbolt dock so you can just plug in a single cable?

I went with 64GB because I tend to keep my Macs for 5+ years or thereabouts. I am not taxing the machine in any way yet, but given what I see the algorithms in Photoshop being up to already, I’m thinking future software may well make good use of what the M1 Max can provide.

Also, if I understand correctly, this is “unified memory” which is used for both RAM and GPU operations, so it’s not exactly comparable to the Intel memory model.

Took the M1 Max 64Gb 4Tb version as I tend to keep this one for a few years.

And my laptop is a 2014 MacBook Air. I use it as travel machine, to offload images from my cameras. I lust after a newer machine, but so far have resisted (with help from my wife

And I too got the 64 GB Mac Studio. I ordered it the month it came out (I got my annual bonus that month as well

!). Mine has 1 TB internal storage, as I already had plenty of external HD and SSD drives.

I used, and still use, an Intel Mac mini in the interim, but I knew that was a stopgap machine between the Mac Pro and an Si system.

So what does this mean for you? I don’t know. If you tend to upgrade you machines on a regular basis then go with the minimal viable system. If like @airwhale and @simonsmark and me you keep you machines for the long haul, max it out as much as you can reasonably afford.

Good luck and have fun whatever you (and your wife lets you!

By the time it’s delivered, 64GB will be the norm

How much RAM did you get for your 14" MBP and what’s your typical memory use with everything running? Is your image processing GPU-heavy? Without knowing more, I’d probably get 32-core GPU Max and 64GB RAM. (I also agree with @Vincent_Ardern that this purchase might not reduce
cognitive dissonance.)

These GPUs scale linearly. In video work, they’re used for editing/effects. The H264/265 filters are used for encoding, so also important. GPU is also used to render UI (I can burst up to 75% of the GPU just running JetBrains’ code editors, for example.)

Some linear results from GPU-heavy Premiere Pro- and Davinci-based benchmarks: 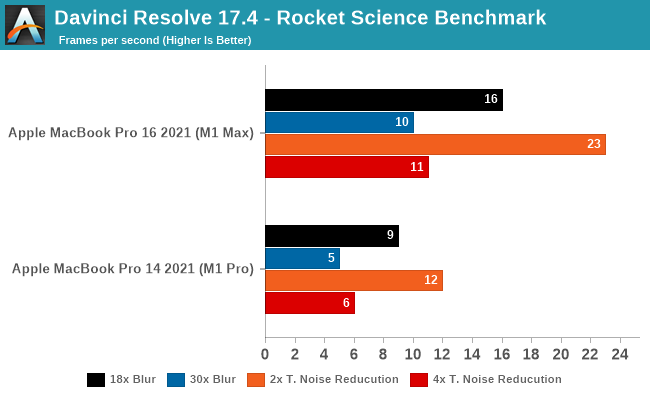 Fair. I will continue trying to become one of your trusted real world users.

I generally am finding people to underestimate the pervasiveness of GPU use on the M1 SoC. Not all of the mental math from the Radeon days carries over.

If it is a question of the money, I would rather go with only 2TB and 64GB, as vice versa.
You can always add additional storage, but you can never upgrade the RAM!
And I really enjoy my 64GB.
If I would be able to get more, I would even do so…

Thanks to all. I appreciate the advice.

I have not ordered, at least not yet. I may well go with @Vincent_Ardern’s advice and stick with the MBPro for the time being. While I don’t have a huge amount of problem with keeping two Macs in sync (all of my data is actually in shared folders sync’d to my Synology with SynologyDrive, so moving data to a new computer is jut a matter of connecting up to SynologyDrive, and keeping data in sync is then automatic. I do of course have to keep software up to date on both, but at least those apps that can share configuration files (KM, Alfred, for example) do so as well), there is a certain ease coming from having only one computer to focus on.

I would have to say the Mac Studio is more of a want than an absolute need at this point, so I remain on the fence. The MBPro is decently spec’d with the M1 Max, 24 graphics cores, 32GB and 4TB, so I don’t think the Studio will be a lot more performance beyond relieving any thermal throttling that might occur due to the cooling constraints of a laptop vs the Studio.

I got the MacStudio M1 Max with 64gb RAM and 2TB. I replaced an original iMacPro with the MacStudio about 10 weeks ago. The MacStudio rocks! I hope to get at least 5 years out of it. Hah!