On iOS, I use Castro as my goto podcasts app.
Out of curiosity, I checked Overcast.
My workflow in Castro is listening (and downloading) queued episodes from old to new, while queue length is 10 hours.
In Overcast I liked the all episodes list, because it resembled my Castro workflow.
I was surprised to find that some episodes in Castro are missing (they were in Overcast list). Probably Castro is not so good in syncing (I refreshed the shows and they appeared)…
Anyway, that reason made me want to switch to Overcast (excellent syncing).
The problem for me is that I can’t recreate in Overcast, Castros auto download 10 hours of listening (old to new). Am I missing something?
THX

this may be related to changes Apple made a while ago with the podcast database.

you might ask Castro folks what the problem is…

I don’t think there is a way. If your large backlog is coming from a small number of heavy feeds, you could approximate the download limit by setting a cap on the number of un-listened-to episodes for just those shows, or globally. Overcast would need to add a per-queue download limit setting that would pair with setting everything else to streaming only to emulate Castro’s primary queue.

As far as the errors go, I’ve found Castro to be worse than Overcast at refetching broken RSS feeds that were later fixed. A couple of times I had to re-add the feed with a query parameter (e.g. podcast.xml?12345) so it looked new to Castro’s crawler.

To my knowledge, there is no way in Overcast to automatically set download limits, as you can with Castro and PocketCasts.

However, I am pleasantly surprised to find it this is not a problem. I currently have 491 downloaded episodes in Overcast, but that only uses 18 GB on my 256 GB iPhone. At times I have had as many years 1100 unplayed episodes downloaded and space has not been a problem.

Thank you all!
Although I’m not pleased with the sync, I’ll stay with Castro… I love their cue method

Yes, Castro‘s queuing is great, and PocketCasts is similar. It does not seem like it would be difficult for Overcast to implement a similar feature, but Marco has been resistant.

The winner between Overcast and Castro is obviously Downcast.

I wish! I do like the per-episode volume adjustment and more granular priority weighting.

Castro‘s queuing is great, and PocketCasts is similar. It does not seem like it would be difficult for Overcast to implement a similar feature

This summarizes my predicament with Overcast. I tried to go back to it after being a user years ago and since Castro is effectively crashing almost all the time but I think Pocketcasts has better queue managent.

Are you finding the same?

Overcast seems to work well enough. It’s been a while since I used Pocket Casts so I can’t speak to its queue management. And I’m trying to break myself of the habit of switching apps.

I am not sure when or how it got easier, but I have gotten as close as I need to get to Castro’s queue system for me to abandon Castro altogether.

I have a Queue playlist, and my flow is:

This solves for me the problem of the episode staying in All Episodes after adding to the queue. It seems like a lot of taps, and it obviously is more than the Castro process, but it became muscle memory very quick and I am able to process and “zero out” my All Episodes queue very fast. I’ve been doing it for a few weeks.

In a perfect world, Marco would allow more customization of playlists. My specific request would be to “exclude” playlists from other playlists, so my “All episodes” playlist would automatically exclude any episodes in the “Queue” playlist, but alas.

I had been trying to move away from Castro for months now as it seems like abandonware (got acquired, no updates for 5 months now, missing iPad version for years after promising, etc.), and this flow was finally enough to get me there.

There’s a Podcast app called Castro? i just want to know whether they sell an HD subscription called “High Fidelity”.

Castro is a great app. One of their best features which is unique to them (I think), is chapter pre selection. If a podcast has chapters, you will see a checkbox beside each one. Once you fire up the episode, you can uncheck the chapters you want to skip (cough) ads (cough).

Problem is, their watch app is awful - which they’ve acknowledged on twitter. Other problem is, they seem to have abandoned ship. No updates for six months and crickets on Twitter.

I had been trying to move away from Castro for months now as it seems like abandonware (got acquired, no updates for 5 months now, missing iPad version for years after promising, etc.), and this flow was finally enough to get me there.

This is my exact situation. I just settled on PocketCasts after testing it briefly alongside Overcast and the former does seem to do better with queue management as well as a bunch of other features.

Castro is a great app. One of their best features which is unique to them (I think), is chapter pre selection.

I’d forgotten about this cool feature though its probably because I didn’t use it enough! I’ll suggest it to PC and see how responsive they are.

Also I will add that Automattic (makers of Wordpress, etc) are the current owners and the founder is well known to be a grassroots enthusiast of high quality software and, with their resources, should be able to ensure it develops nicely well into the future.

The combination of this feature and the queue is what’s kept me using Castro for the past couple of years.

I really miss both aspects when I try to go back to Overcast or Pocket Casts, but I agree that the silence from the devs is unfortunate and concerning. That being said, I don’t actually have any issues with Castro; I can’t recall it ever crashing and the Watch app does everything I want it to do (which, admittedly, is very little).

I’m in the same position. The utility right now is too high to ignore, just because I don’t like what appears to be the trajectory.

Plus, they are still quick to reply to my emails. Do hope for a bugfix update soon for description previews, though…

I am patiently waiting for a testflight built. This is the only app I have turned on notifications for update.

Sadly nothing for months … 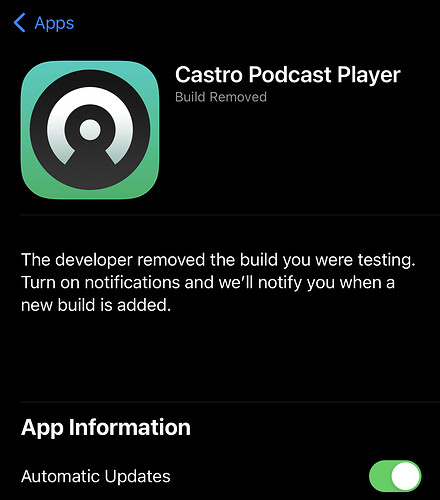 I am disappointed by the lack of communication. I understand delays occur… but it’s common courtesy to let your customers know….

I think this all points to them shutting down soon, or else they’d be saying more. Unfortunately.

However, I am pleasantly surprised to find it this is not a problem. I currently have 491 downloaded episodes in Overcast, but that only uses 18 GB on my 256 GB iPhone. At times I have had as many years 1100 unplayed episodes downloaded and space has not been a problem

Agree. I’ve never found the download size being a problem.