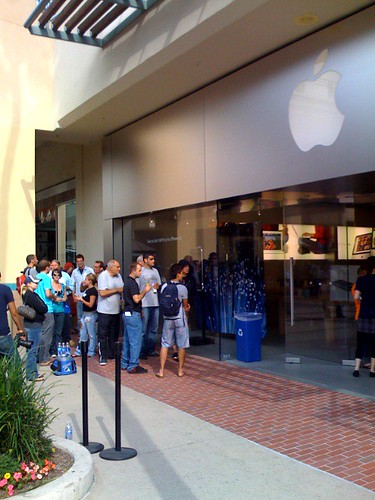 I very much enjoyed the experience of standing in line for the first iPhone, in 2007. I didn’t enjoy it at all in 2008; it’s the kind of thing that’s fun to do once.

Since then I just order online.

I still get chills thinking about working that release. The plan was that all customers would have to activate their new phones with AT&T in the store. Of course, this fell down pretty quickly so we had to keep increasingly unhappy people hostage in the store (while the people in the line out in the heat had to wait) for a while before Apple finally decided to let people activate at home.

It was also the launch of MobileMe. I wrote about MobileMe last summer, and wow, was it bad. We had people coming to the Store, to a close Genius Bar, because MobileMe had eaten all their contacts or tripled all their calendar events. Most of the time, our only course of action was to tell them to go home and wait to see if got better after a few hours. Gulp.

Part of the fun for me about the 2007 iPhone release was posting updates and jokes online while I waited, using this new thing called “Twitter.”

I received a nice BlackBerry from my company a few days before I bought that 2007. Those few days were the last time I ever used a BlackBerry. I liked the 'Berry a lot, but I liked the iPhone more.

When iPhone 3G went on sale here in Malaysia, it was a midnight launch event at the Petronas Twin Towers and the place was jam packed, even at this ungodly hours. I was there in line waiting for my turn and I think by the time I received my unit, it was almost 3am. It was a fun event though, with the energy and excitement!

Totally agree, these lines were fun because of all the excitement they generated (remember Woz sitting in line with others a few years back??) but there’s no way I would put up with that now! Apple got me spoiled on ease of setup.

The fun was spoiled by the scalpers.