Pick one: Sidecar or Universal Control 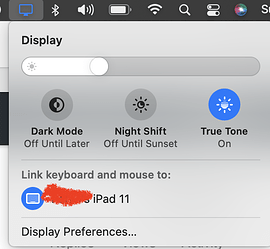 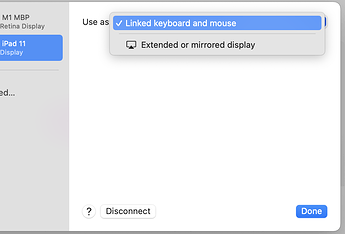 universal control is fun and useful, but there are many times I need to use apps that won’t run on iPad and so the second screen is so much better to have.

How would you use both, anyway? Can’t really extend macOS to the iPad while also showing iPadOS.

Can’t use both. I just got worried that Sidecar went away in favor of universal control. It’s just a pick one situation now. Just posted in case anyone else ran into that same issue.

Unless… you had two iPads. I wonder if you could do either double sidecar or sidecar + UC. ¯_(ツ)_/¯ Any double-ipad-lifestylers out there?

How would you use both, anyway?

Perhaps not simultaneously. However, when doing lectures, it would be useful to be able to use the iPad as a mirror for slides AND (perhaps with a swipe) also have a “space” on the iPad to run an iPad sketching app (that then also will mirror to the projector).

Perhaps to be clearer, in a lecture, I run my MBP with SideCar to my iPad. I mirror the projector to the iPad. I have EpicPen running on the MBP with its controller displayed on the projector (iPad). I move the window for the app that I want to display from my MBP display to the projector. It shows up on my iPad. I can control the app window AND annotate over the app window (with EpicPen). What I cannot do is open my annotation app on my iPad (e.g. ZoomNotes) in a separate window and make drawings or write out problems.

What Apple needs to provide is a way for the iPad to act as a side car mirror for an app running on macOS being shown on a target display (e.g. a projector) OR act as an iPad while projecting its output back to a target display.

Super cool use case, by the way. I wonder if there’s an Applescript or something that would allow you to switch easily between the two…

I like sidecar a lot, but universal control is going to be extra helpful when it comes to sending Procreate files to my Mac.

Same, but for PDFs. My annotation workflow is going to (hopefully) become a lot smoother…

Moving files across is so smooth. I have everything in the cloud (pre-UC), so may keep it that way, but this is nice.

I am loving Universal Control just as I thought I would. Sidecar never really stuck with me, especially when I realized I couldn’t use it in portrait mode.

Side note: is anyone else having trouble typing modifier keys (ctrl, shift, cmd) when using the keyboard on their iPad? I have to hover the mouse back on the Mac screen to get them working again. Filed an error report, but not sure if I’m alone.

Side note: is anyone else having trouble typing modifier keys (ctrl, shift, cmd) when using the keyboard on their iPad?

I figured this out. The problem was my Logitech MX Mouse. All is good now with the Magic Mouse

I’m having the same exact problem and I have an Logitech MX Mouse. What did you do to fix this?

I had to stop using it

the MX is superior to the Apple Magic Mouse in many ways, but I kind of missed the gesture controls. I’m not sure if the problem is Apple’s or Logitech’s to fix eventually