I have a large library of Audio Books in MP3 format, which I’d like to play on my iphone on demand.

My preferred option of Plex doesn’t have the option to have a library of Audio Books.

Does anyone else store audiobooks on their Mac, but play them on their iphone either by transferring them as they need them, or by streaming/downloading them on demand?

I upload them to Overcast, and then play thru that app
taking advantage of the Voice Boost and Smart Speed

I’ve never actually used it, but you can import into Apple Books on the Mac and then download to your device for reading on iPad or iPhone.

I’d probably go with Overcast though.

I have used Bound for this in the past.

For $5 you can get Audiobook Builder for the Mac and assemble the files into an .m4b file and upload them using Overcast if you are a premium subscriber, or I’m sure there must be other players which can do it. (Note: the website is a little date but the app has been around for a long time and works great.)

I’ve done this on Apple Books (Mac), and it works fine. I could then download to mobile devices.

I use this ‎BookPlayer You can use airdrop from a mac or connect to cloud storage.

I used to use Overcast for it, but never liked how the files are represented in the “Uploads” playlist (no cover thumbnails and file names, instead of meta data tags), but I recently discovered https://ontape.app/ and it’s great!
The main selling point for me is that the trim silence feature is aggressive. This feature alone cuts out 30min. of an 8h book for me.

I also like that it offers a widget. It is a nice visual reminder to pick up the book again.
(Which reminds me that Overcast still doesn’t offer any widgets at all.)

I have all my books stored in my Plex library, but use Prologue to access them.

You can download for offline play, or stream as and when you have cell signal.

It works really well for me.

I also use Audiobook Builder to convert mp3 spoken word content into .m4b files. To listen to them I’ve settled on Book Mower, primarily for the (rather opinionated) UI. I find it much easier to navigate when I’m on the move, listening while doing chores, or listening at bedtime than the other apps I’ve tried. It has GIANT tap targets which are much easier to navigate if you’re outside on the go or have soapy hands or whatever. It does some “automatic” bookmarking that’s more fussy than useful, but does have a decent tool for marking a specific place you might want to go back to.

You can import files directly from your iTunes / Books library or from another device on your local network via a web browser. I like the interface so much that I’ll jump through a couple of hoops to get content in there from sources that have their own players (e.g. Audible or Libro.fm).

One caution: I’m not convinced that the app gets much active development and there are occasional playback glitches on bluetooth.

I tried BookPlayer, but haven’t been able to actually load any content into it. AirDrop doesn’t work as advertised and it apparently doesn’t pull in files directly from iTunes / Books.

As another poster pointed out, you can load your audiobooks into Apple’s Books app on your Mac for playback on your iOS devices, but beware: unlike the Music app (or iTunes if you’re still using it) there’s no way to use the Books app for content stored on another drive. Any audiobooks you import into the Books app will get stored on your hard drive in a Library container (~/Library/Containers/com.apple.BKAgentService/Data/Documents/iBooks/Books/Audiobooks). Using the Books app as anything other than a temporary home for content you’re actively listening to is a no-go if you’ve got a big library of audiobook content. I don’t know what Apple was thinking when they set it up that way.

I’m not entirely satisfied with the way Books handles audiobooks that aren’t obtained from Apple, but that’s what I’m using right now. Recently, I’ve been using Audiobook Builder to convert multiple MP3 files into a single M4B, then dragging that into Books on the Mac, then syncing to my iPhone. I sometimes use an app named “undulib” as an alternative audiobook player on my phone, but it relies on the same data used by Books, so I still need to sync the books down. I may need to look into the Book Mower or On Tape apps mentioned above.

To listen to them I’ve settled on Book Mower , primarily for the (rather opinionated) UI.

I love this app so far and agree with all your reasoning. $4 for unlimited books is very fair. Thanks for sharing this!

Plex has a pretty good support for AudioBooks as long as you name them properly.

BookPlayer is an excellent AudioBooks app for iOS.

I’ve been using Bound (‎Bound - Audiobook Player on the App Store) and love that I can add books via Dropbox and Google Drive. Makes getting my own books as well as books to my parents devices really easy.

For playback, given that OP has put their audiobooks into Plex, they should definitely look at the Prologue app. It’s terrific, and under active development. (The author has a similarly great music app for Plex-based music collections.)

If you’re not using Plex as the source / sync mechanism, I’ve tried but not extensively use both BookPlayer and Bound. I think BookPlayer has been my preference of the two.

The Audible app is where I listen to the vast majority of my audiobooks. In addition to a seamless connection to your Audible collection, there’s an option in the preferences, Enable Media Library Access, which allows you to play audiobooks that have been sync’ed to your device via Books.app / iCloud. However, those titles are clear second-class citizens. Testing just now, book cover art is ignored, as are chapter tracks. That makes it unacceptable, IMHO.

The iOS Books app itself is fine for playing books, though it’s not my favorite player. As @krocnyc wrote, using Books.app should be temporary — use it as a mechanism (via iCloud) to sync audiobooks to your iPhone, and then to play them back. Remove finished titles from Books.app, because …

iTunes was a great app for managing an audiobook collection. As mentioned, starting with Catalina, audiobooks moved to the Books app. Which is terrible at library management. If you have a significant collection, you’ll need to find another tool to manage your collection.

Plex can be manipulated into handling audiobooks OK, but it’s not a native media type for the software, and it shows. There are third-party guides, work-arounds, and third-party-do-you-trust-them metadata agents available. Be prepared for a lot of sadness (either extra work or crappy UX) if you decide to go down that road with a large collection.

My current collection management tool of choice is iTunes, running on Mojave on my prior Mac. It’s got good list views, filtering, and understanding of audiobook-specific metadata. It also lets you edit that metadata easily (something impossible in Books.app). Good metadata is essential to a good experience in Plex.

I have high hopes for a new app+service, Bookcamp. It’s in late-stage beta testing (apparently), and will initially require you to use a Plex server as the back end. Eventually they plan to add their own cloud service back end. It’ll be a subscription service, which some folks are allergic to. But it’s early stages, and all the business details are still being hammered out. Join the Bookcamp subreddit if you’d like to offer feedback. (It’s pretty quiet currently.)

Background: I have a large (~2000) audiobook library, sourced from Audible, Downpour.com, CDs, and elsewhere. 20 years of collecting and listening…

Blockquote
You mention using iCloud to sync books, but I find this only works for books purchased on the bookstore. All of my books on cd I ripped and turned to .m4b don’t sync unless I manually plug in the phone via usb and do a sync. (This is why I’ve been looking for another app, but books for pole watch is a decent stand alone player.). Is there something you need to do to sync via iCloud for drm free books?

To be honest, it’s been quite a while since I bothered with this approach (iCloud sync’ing). I’ve been playing with Plex + Prologue for my non-Audible books, and while it’s not without its labors, it works well enough. (Prologue is a joy to use. Plex, less so. But it runs on my Synology, which is big enough to store my entire collection, so it’s a marriage of convenience.)

For iCloud sync’ing, hmmm. It seems like I never formally tested it with books that weren’t purchased from the Apple Bookstore. I buy so few audiobooks from Apple, I was sure that some of the audiobooks in Books.app must be non-Store, and were sync’ing via iCloud.

But testing just now, with a book I know I didn’t buy from Apple, and wasn’t in Books.app previously, it’s not giving me the little cloud icon to indicate that it’ll sync via iCloud. All I did was drag the audiobook file from Finder into Books. Might be I have to wait a bit for iCloud to sync, might be it never will. 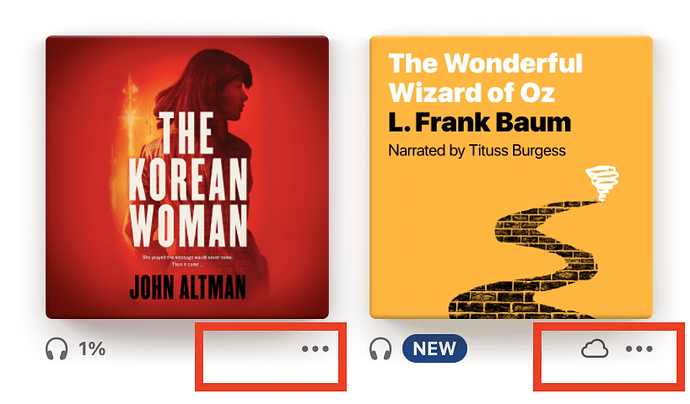 It did sync directly from my Mac to my iPhone. I don’t find USB syncing onerous, personally, but this new book did sync over Wi-Fi (a feature you need to enable), so no cable necessary. I could probably turn on automatic sync, too.

Note that you do need to set audiobook-specific sync’ing on, too. Once enabled, this audiobook sync’ed quickly enough. (A minute or three? I didn’t time it, I was typing this message.) 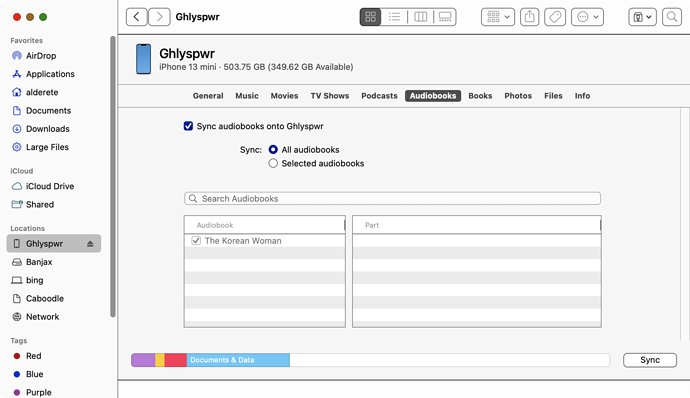 Here the only audiobook listed is the one I just added to Books.app (in macOS Monterey), which adds to the evidence that iCloud sync’ing for your own audiobooks does not work. (At least, not via the Books app.)