Plugged in, Power Source-Adapter, but not charging?

I just noticed that my 14" M1 MBP is plugged in, the light on the connector shows it’s charging, the icon says it is on power, but it is not charging.

Have you seen this before? What causes this? Solutions? 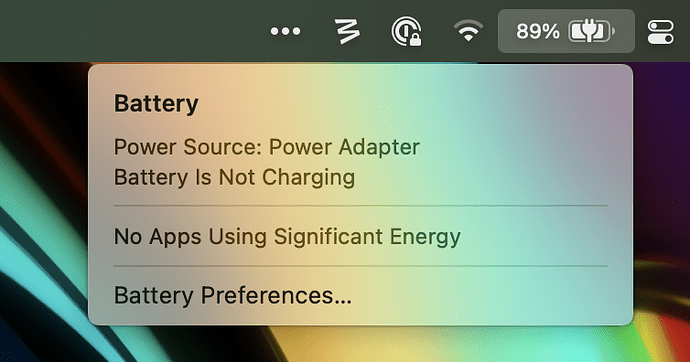 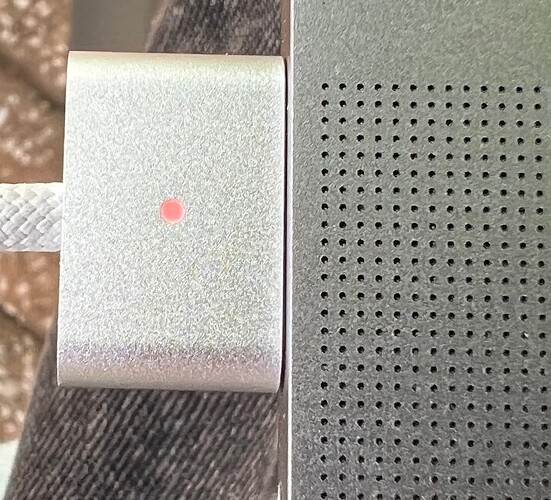 As far as I understood, there are only two modes of that light: “Green = Fully charged” and “Red = Not fully charged/Charging”.
So, as long as there are not 100% power inside the MB, there will be the Red light on.
And I expect it to be actually not charging at all times, because there should be a kind of power management, that protects the Battery from damage by observing some rules, while plugged in, like the iPhone e.g. also do, since the Battery-Disaster the had with the iPhone 6, or so.

That makes sense but doesn’t appear to be the issue. If I go into a test profile, it is charging correctly, but not in my normal profile. I suspect there is a software issue. I’ll tech support.

I do not have a laptop to check, but is there possibly a setting in “Battery Preferences” that is different between the two profiles that might explain things?

The iPhone is recognising how you use the Phone normally, and based on that, the charging is done.
For example, if you wake up normally at 7am, the iPhone pluged in during night is not fully loaded at 2am, and kept on 100% for the next 5h, but it is charged up to around 80%, kept there for the time, and then charged in a way, to reach the 100% shortly of 7am.
I could imagine, that Apple is using a similar function on the MacBooks, and if this would be true, it makes sense, that you observe a different behaviour between you account, that is known to the PowerManagement, and a test account, the PowerManagment has no idea, how it would be used.

Look here.
That seems to proof my earlier idea.

(Not at my Mac at present, so wording may be a little off…)

I have very similar on my M1MBA except that mine also includes the message “Rarely used on battery” and has a Charge to 100% now option. I believe that this is the battery optimisation that Apple has implemented to prolong the battery health. My MBA is plugged in pretty much 24/7 and I can charge it to 100% if I am needing to take it with me; otherwise I just let the software take care of it.

MyMBA has been at 77% and slowly discharging for a number of days now.

I am guessing that this is the same with your MBP, although why you don’t have the Charge to 100% now option is peculiar. If you want to change this, I would look in the Battery Settings.

I am guessing that your Test profile has not been used enough for the system to learn how the MBP is used on that profile and so is still charging to 100% whilst using that profile. If you stay logged in to that for an appropriate amount of time (whatever that may be) I think the MBP charging would start to do the same, holding at a lower charge.

Thanks for the kind help. Based on my support call with Apple, that is not the issue. The problem occurred in safe mode, my profile and a test profile. I spent an hour with tech support. According to the tech, there are two options:

He had me nuke and pave the MBP, it is now reinstalling Monterey as a new computer. If this doesn’t fix the issue, I’ll have to take the MBP to the Apple store. Good thing I have a 12.9 iPad so I can keep working!

Thanks again for taking time to offer advice—much appreciated!

I’ll post the final solution once I have confirmed it.

Thanks, much appreciated. Please see my response above.

I would not have followed the advice from Support. At least not until I had given the laptop more time to see what was happening. Were you in a hurry for some reason? Nuke and pave is a drastic step that should not be necessary on a brand new Mac. Battery health has gotten very complicated and is not at all transparent or well documented. Many in this forum have described unexpected or odd battery behavior. With nuke and pave the recommendation, I would have waited as long as I could, researched some more, and gotten a second opinion.

Generally I would agree but battery was draining and not charging—a problem on a laptop.

But, good news, I’ve nuke and paved, downloaded the essential software and the battery issue is fixed. 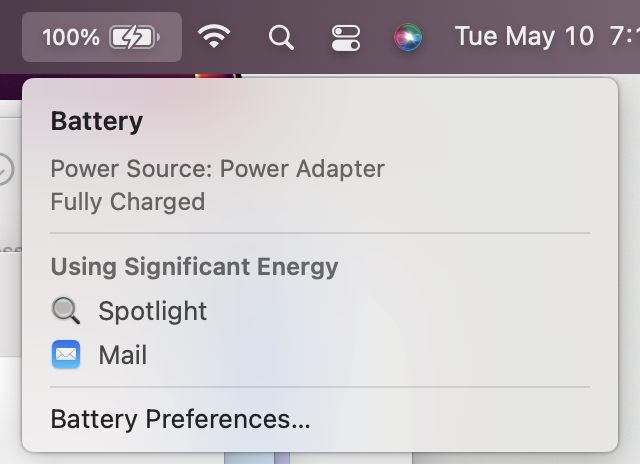 Was the battery actually draining, or just not charging to 100%? Optimized battery charging will let a full battery drain to about 80% and hold it there if it thinks that you’re not going to need it. (I’m asking because your screenshots aren’t showing anything that’s different from expected behaviour)

Nuke and pave is a drastic step

Yes, but unfortunately it is a more common step you hear from Apple Support, if the person you are talking to has no glue, where the real problem might be.
It is just the Nuke-Version of: “Did you do a restart?”

From what I could read regarding the problem, I still stick with the regular function of the power management of that MB.

Yes, it should drain, according to the power management, to protect the battery!
The best way to keep a battery healthy is around 80%!

I apologize for my poor communication.

I don’t think I’m being clear.

This was not a battery management issue. The battery icon was showing the battery not charging while plugged in BUT other parts of the system, e.g., under system information, indicated it was charging. The system was giving two conflicting readings for the same status while the battery was also draining. I worked with a senior tech for an hour at the end of which he suggested a a nuke and pave to determine if the issue was hardware related. The good news is that is was a software issue; everything is working correctly now with consistent readings. 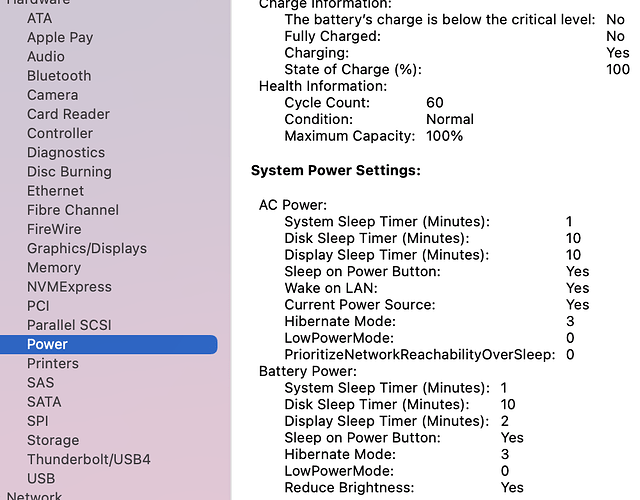 I should add that I was having a few other minor but strange behaviors, e.g., Safari would close unexpectedly for no apparent reason when not being used.

At any rate, all is good now.

Nuke and pave is a drastic step

Yes, but unfortunately it is a more common step you hear from Apple Support

Yeah. They asked me to do it to troubleshoot The “calls on other devices“ feature once. On a 1 month old Macbook. It was the second step in troubleshooting. I asked them to justify their reasoning. They had no answer, other than “sometimes it helps”…which isn’t an answer, it’s a completely blind guess. Especially since I had the problem on three separate Macs. So I said “no”.

On a related note, lately I’ve been been noticing that support places pretty much zero value on your time or inconvenience caused.

For example, signing out of iCloud on all your devices. Sure, it’s not a super-complicated procedure, but it’s time consuming and sometimes requires you to do some significant setup again afterward. It’d be one thing if it was a one-time thing when you got a new device or something, but if it solves a problem they don’t seem to care that you have to do it over and over again every couple of weeks. In a case like that, it’s very clearly not actually the solution to the problem - it’s a band-aid that’s covering for something else that’s going wrong.

And regarding nuke & pave, if I had backed up my MacBook and restored after a nuke & pave, 99% of the time I would expect that to bring back the problematic configuration that was causing the issue in the first place. So they’re not just asking me to do a reinstall, but they’d be effectively asking me to do a full, manual reinstall of all my stuff.

Which is, quite frankly, a positively asinine expectation as a blind troubleshooting step.

In their defense it is really hard to find, train, and keep good support people. But I would think if anyone could do it, Apple could.

In their defense it is really hard to find, train, and keep good support people.

That’s a fair statement. The problem is, these are “troubleshooting steps” - not guaranteed solutions. And nowhere in the knowledge base does it let them know a “method of action” for why the reinstall would fix the problem, because if they knew there would likely be a less-drastic solution. In the case above, they told him to nuke & pave while crossing their fingers and hoping it might change something that would fix the problem.

And if a nuke & pave would be a guaranteed, permanent solution to a problem, I’d see it as a hassle but a justifiable one.

But telling somebody to do a complete OS + application reinstall can be a multi-day process. And in my case I mentioned above, we eventually solved the problem by rebooting my wi-fi routers. “Nuke and pave” was BEFORE THAT in their troubleshooting hierarchy, apparently.

That’s where I fault Apple. If you can’t find enough good techs to staff the phone banks, I get it. Really, I do. But these less-than-fully-competent techs are clearly just using some sort of “expert system” or knowledgebase that’s walking them through things, and it should be possible for a company the size of Apple to design that in such a way that steps that take 5 minutes like “reboot your wi-fi” come before a potentially multi-day process like “nuke & pave”.

Agree with everything you say. In the best case scenario, nuke and pave just restores a machine to factory-fresh settings. The “battery-draining” Mac under discussion just came factory fresh from Apple not long ago!

Even the misbegotten Microsoft Windows registry never got screwed up and needed a refresh this soon!