Looking for a remote to control powerpoint, keynote, press etc

Ideally bluetooth and wireless so can use on windows and mac

Think DS used to recommend Kensington, but that was some time ago, wondered if anything new was around.

I’ve been using the Logi (Logitech) Spotlight for a month.

Expensive but was on sale direct through Logi. Retailers may have sales too. Works through bluetooth on macOS and Win. Also includes a USB adapter that plugs into the remote for storage if you want to connect that way - I like the versatility. The tools (requires software download/install) are really nice (on-screen laser, spotlight, clicking - see link above for screencast demos).

Through 12 days of software training classes I’ve used it in this month it hasn’t failed once and feels great to hold.

Holler if you have any specific questions on it!

Hey there,
Quick follow-up question from another remote-seeking user:
Does the Logitech remote offer a “black screen” button (usually translated to the key “B” by the remote) - that works with Keynote both on a Mac and on an iPad?
Greetings from Berlin,
jan

I have a Keyspan remote that I’ve been using with my Mac for about ten years. It also works with Windows. While it gets the job done, I’d like to get something more compact and modern. Preferably a Bluetooth remote that can be used on both Mac and iOS.

@khit — The Logitech Spotlight looks like a pretty slick product. Have you ever used it with an iOS device? Thanks!

Hi - Yep, it is highly configurable, so you can do that.

I love mine - not cheap, but built like a tank

Hi Jan, yes, the Blank Screen function can be assigned - on macOS/Win - to one of the buttons on the remote and I’ve tested the built-In “Blank Screen” function with Keynote specifically. (You can also set custom keystrokes if needed.) Here’s an example of the software set to blank the screen when you hold the Back button: 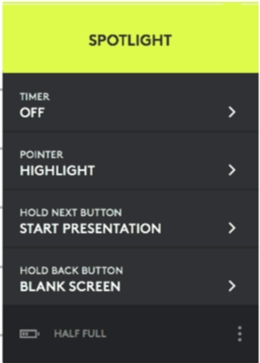 The remote app lives in the menu bar and allows you to easily change button assignments.

Edit: See next reply for info on iOS.

that works with Keynote both on a Mac and on an iPad?

Have you ever used it with an iOS device?

Sorry, Jan! I need to read more carefully - just realized you asked about Keynote on iPad as well as macOS.

And to reply to @timstringer’s question at the same time:

Not such good news on iPad/iOS as far as I know (I never use my iPad to present due to the software I train on being macOS only).

You can pair Spotlight with iOS (looks like it is seen as an external keyboard) and it will control forward/back during the presentation. However, there’s not an option to program the keys and none of them seem to be programmed by default for Blank Screen. Logi needs to release an iOS app!

The b key results in a blank screen in Keynote on iOS, does the remote not support the default shortcut?

Thanks for the heads up @khit. Hopefully Logitech comes out with an iOS app. I’d be much more motivated to buy the Spotlight if it were fully support on both Mac and iOS.

Has anyone got suggestions for a remote to control Prezi Next easily? I know you can use an iOS device but I’d rather present standing and looking at the audience 98% of the time.

Unfortunately it doesn’t seem to send the “b” key at this time when you press or hold any key on the Spotlight.

Looks like quite a few folks have been asking for an iOS app over on the Logi Community forums but their support says they can’t create an app that controls the cursor like in macOS/Win. Makes sense for spotlight, laser, magnification effects but that’s irrelevant to the Blank Screen function which, as you point out, is as easy as sending the “b” key.

I’m going to post over there with that feature request (and encourage others to as well)!. Hopefully they’ve made the Spotlight firmware upgradable and can add it!

Hey - thanks for all the great replies.
I already feared that iOS might be the tricky part. (Little footnote here: I tried out Keynote in presentation mode on an iPad Pro with Apple’s Smart Keyboard - and even there the “b” key only worked sporadically. Interestingly, that function (“b”) is not even listed in Apple’s official Keynote on iOS documentation. Hm …)

HI,
Tripp Lite has a remote that I use and it works well for keynote and ppt. Very easy set up and batteries last a long time. It has a laser too. I am not sure about the blank screen function. It probably doesn’t, because that is something that I would use a a lot.

I have also been using my iPhone to control keynote and I think that is the best if you are using keynote. 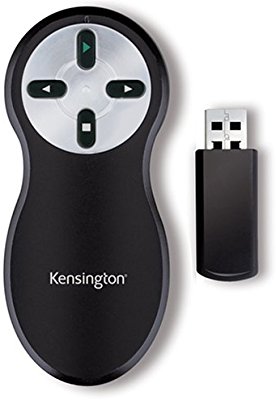 @dgm885 Yes - that’s been my workhorse for years on my Mac.
Alas, it doesn’t work with iOS (it’s a “USB-dongle-only product”) - and IMHO the build quality has suffered a bit in recent years.