I’ve had Private Relay active on my Mac since PR was released. Lately I’m getting this Google popup, which I assume is possibly Google and PR not interacting nicely. I don’t consider a couple of Google searches in 20 minutes to be “unusual activity”. My computer is clean. No malware reported by Malwarebytes. 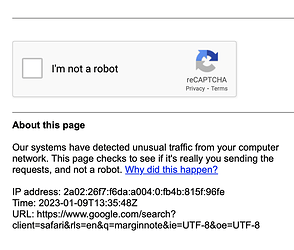 I see this prompt sometimes when doing 10+ searches for something in a few minutes (e.g., rapidly creating searches in new tabs for a bunch of different educational institutions).

On the other hand, Private Relay did make Google think I was in another couple of provinces, so I can see an interaction like that causing Google to get suspicious of you.

I think this might be to do with the fact that traffic now partly routes through the relay, so it’s millions of users going through the same endpoint, or with the same referral address or something like that, which might be seen as “unusual activity”

I think you’ll see ;less and less of that as time goes on probably.

There was a post on Reddit about this earlier today but I can’t find it now. They thought it was due to the private relay, and the purpose of the post was to tell people not to give in. Keep accepting the prompt and moving on, don’t let Google make you turn private relay off.

Then – as it does on Reddit – it went into arguments against using Google for anything, why DuckDuckGo has fallen from grace etc etc etc. Maybe it’s better I didn’t find the post.

But I think the sentiment is correct. It’s a Google-lets-make-things-difficult strategy.

I got this today. Didn’t know why. Restarted my Mac and it went away.

I am using Private Relay.

The thing is, I don’t generally use Google for search, but rather Duck Duck Go. So my traffic to Google is minimal. I was about to start looking for some malware. Glad to find it’s only Google.

I saw this a lot until I turned PR off. I couldn’t log into my bank and some other sites had problems too.

I turned off PR because of this too.

It’s possible for Google to whitelist PR, but that will need Apple and Google to co-operate. The problem may be intermittent as Apple introduce new endpoints, but don’t get round to telling Google. It’s hit and miss as to which endpoint you end up on, so rebooting might well work by changing your endpoint.