Hi all. I wonder of the MPU hive mind has a suggestion for me. I seem to have some problems with the Share Menu in ‘Extensions’, in MacOS system preferences. 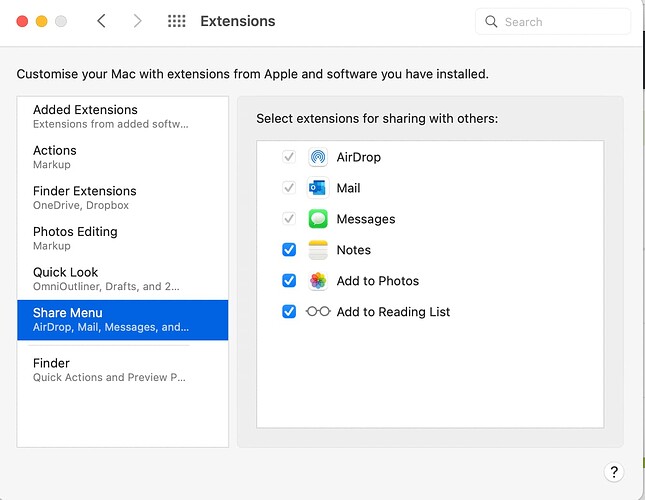 The problem is that no third party apps appear here at all – and apparently it’s here that I can check their boxes to make them available for inter-application sharing. I noticed I couldn’t for instance push articles from my RSS reader (NewsNetWire) to DEVONthink. I’ve checked in with the DT team but they suggest the problem is at my end and likely an OS issue.

I’m tagging @deanpribetic here since they reported a similar issue in 2020. My MBP 14" M1 running Monterey 12.6.2 is also under my employer’s management (I’m university staff in the UK), but I have admin rights on the machine.

So my question is: is it possible for system admin to lock down the share extensions (I will check in with my employer’s IT team but you lot here at MPU run circles around them

). If that’s not an option that can be shut down (as the good people at DT assumed), then how can I troubleshoot this?

If this is a system coming from an University IT, it is very likely, that it runs under a MDM.
And there it is possible to restrict almost everything.

MDM lets you securely and wirelessly configure devices, whether they’re owned by the user or your organization.

Thanks, Ulli. I hope you are wrong, but I fear you are right!

I’ll never be ungrateful for an employer who provides me with a MBP M1 – but the restrictions on university IT are becoming more of a pain in the backside. (I recall another thread about this here on MPU some time back).

Anyway – MDM will mean I’ll go beg for my Share menu from my IT team.

Maybe you could circumnavigate this issue with a shortcut?
Maybe Hazel or KeyboardMaestro could provide an solution for that?
Something like sending the document to a finder folder, and let Hazel sort it into the DT3 Inbox.
And, BTW, DT3 could handle RSS by itself.

Thanks! Yes it seems easy enough. In NetNewsWire command-C copies the article URL which I can then push to DT with the universal clipper, URL on the Clipboard, and save as a ‘web archive (clutter free)’. That’s neat enough for my purposes. I was hoping to solve my share extensions for more purposes then this, but for now this will do.

(I have never ran a single Shortcut; rely on Alfred’s workflows rather than the more powerful KM, and don’t have Hazel, but they are all on my ‘If I want to disappear into another workflow rabbit hole for a few days’ list).

You could receive the whole RSS-Feed within DT3.

DEVONtechnologies | How to Use RSS in DEVONthink

DEVONtechnologies develops DEVONthink, DEVONagent, and other Mac and iOS apps for document and information management and web research.

Cheers yes – I tried that for a while but moved away from DT as a feed reader. Getting to about 100 feeds or so, and syncing that database with iOS/iPadOS DT2G, became quite unwieldy. I’d trust DT with most of my life, but a nimble and attractive feed reader it was not! I guess that dedicated apps that talk directly to a feed service (Feedly in my case) do this job best since it’s the only thing they need to be good at.