I received an email that proton mail is now Proton and they’re integrating all their various apps into one package.

Is anyone using it and what are your thoughts?

Is this the one-stop secure everything service I should be using?

I like it…I mainly use their VPN though and am not sure I have a need for all their other services.

It is interesting how everyone is going for this light purple mauve colour for their rebrands. My bank, and investment company have just picked the exact same colour…

am not sure I have a need for all their other services.

I think that’s going to be the question, whether I want to pay for stuff I probably won’t use. I think that’s always a gamble in bundling products.

Purple is the new blue!

I’ve been a subscriber to Protonmail almost since the beginning and have all my iCloud and Gmail emails forwarded to Protonmail and it’s been great. I am a little disappointed in the fact I can’t get to the calendar or drive services through the app and can only get into them through the web. I’m hoping they will have stand alone apps for iOS soon. The new app refreshing is very welcome.

Proton Unlimited is €9.99 = USD$10.65 when you pay for 12 months, and this would get me an upgraded email plan, the same amount of cloud storage, and twice the number of VPN connections (10 vs 5). My email would count towards the cloud storage quota, but it’s a negligible amount.

I will probably switch when my Mullvad and Tresorit subscriptions expire.

I haven’t used ProtonVPN or ProtonDrive. ProtonVPN is highly rated by Techlore, which seems like a trustworthy reviewer (I could be wrong). ProtonDrive is still labelled as beta, so I’m hoping it’s a mature product by the time I switch.

I haven’t used ProtonVPN or ProtonDrive

I’ve been using ProtonVPN for awhile and it’s been fast and reliable and I feel the company is sincere about their commitment to privacy.

ProtonDrive is a little bit of another story. You can’t access either Drive or Calendar from the Protonmail app and there are no stand alone apps. The only way to access either of these features for iOS is through a web page. It’s a little frustrating but they are working hard and will probably have those apps eventually.

I’m a long term Proton mail and VPN user and have nothing bad to say about the service. Strange to read comments above about not having an iOS app for Proton Drive … it’s on my phone (but perhaps this is because I was on the Beta?)
The other thing that seems to be happening is that Proton seem to increase storage capacity quite a bit.
So, yeah, super happy.
Simon

I must be missing something then. It’s not in the Protonmail app and I couldn’t find a beta test that’s open for it anywhere.

Did you sign up for the beta invitation about a year ago?

Yes – I reckon it was a year ago. Curiously, I can’t find the app on the UK App Store either. Very odd indeed. 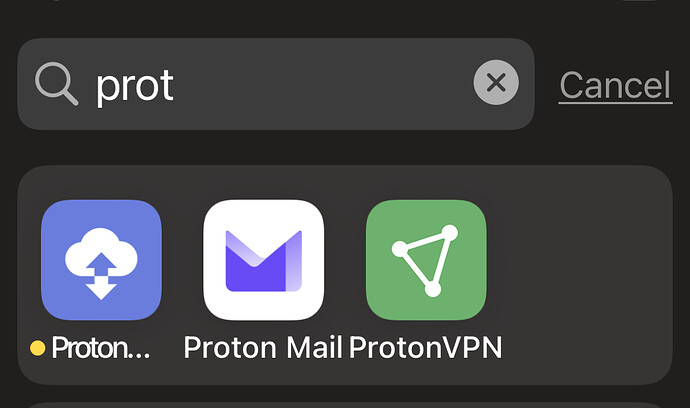