Raycast vs. Alfred or Launchbar?

Raycast users, why do you prefer it to Alfred or Launchbar?

Do you use Raycast with one of the other two?

Haven’t used Launchbar. Used Alfred in the past. Prefer Raycast because:

There are lots and lots of reasons why I love Raycast, but I’m sure the ones not listed here are doable with Alfred/Launchbar, I just don’t want to be locked in or to pay money. If Raycast starts paywalling features, I can just take my scripts and move on.

I currently use Raycast for some of the same reasons.

I was surprised that Raycast raised VC funding. Seems a stretch for a launcher application, but good for them.
I have Alfred as a backup because it has some Zotero integrations, but not currently using it.

Not sure what is going on there, but on my i5 iMac I can bring up Alfred and it gets all my keystrokes. No delays at all.

I do really like the way Raycast looks. Alfred could use a more modern look.

Tried with both my old 2017 i5 Macbook Air and my current 2020 M1 Macbook Pro, issue persisted. Maybe it just doesn’t like me

Interesting, just tried on my M1 MBP as well and it catches everything, wonder what is going there?

So, if Raycast has VC funding, people are expecting to make some big money off of it. Why/how is is free?

What is the pricing for Raycast?

While we are in public beta, Raycast is available for free. Eventually, we are planning to introduce paid features for power users and teams. The core features will remain free.

Remains to be seen how “core features” will be defined.

Incidentally, they are also looking to expand to Windows and Linux, after they nail the macOS version. I like this, less platform lock-in but still great native apps.

They raised $15 million, so aggressive growth is probably in the mix

TLDR; IMO, Raycast is good for a free app, but not anywhere close to what Alfred can do!

I tried it for a few days. It does have some nice integrations with gsuite, github, and other similar services, but I do not think it is anywhere close to what Alfred can do (I haven’t used LaunchBar). I think it is targeted more towards businesses. At least it feels like it.

I definitely felt it was much slower than Alfred, although faster than Spotlight. For free it’s definitely good, but the features it would offer are yet to be seen. It might look “modern”, but again you can create themes in Alfred and make it look what you want.

I think it will be a couple of years until it can do what Alfred can, since Alfred has this rich community of people and workflow already in place. Maybe users who don’t want to spend money on Alfred (or need the power of Alfred) can use this as a Spotlight Alternative

One thing I liked that Alfred can’t do (or I don’t have a mod installed) is convert Fahrenheit to Celsius without going to a webpage. Other than that, it seems to take more keystrokes and isn’t as quick as Alfred. Looks like it could have promise, but Alfred is a lot easier out of the box.

Interesting point. I would agree that Raycast currently has lots less power than Alfred + Powerpack, but I would argue it gives better tools for adding power (their Extensions API) that would allow devs to add better functionality faster than with Alfred.

Here are three converter workflow for Alfred. Choose what you want

. See, this is what I was talking about in my previous comment, the community is so rich and active. 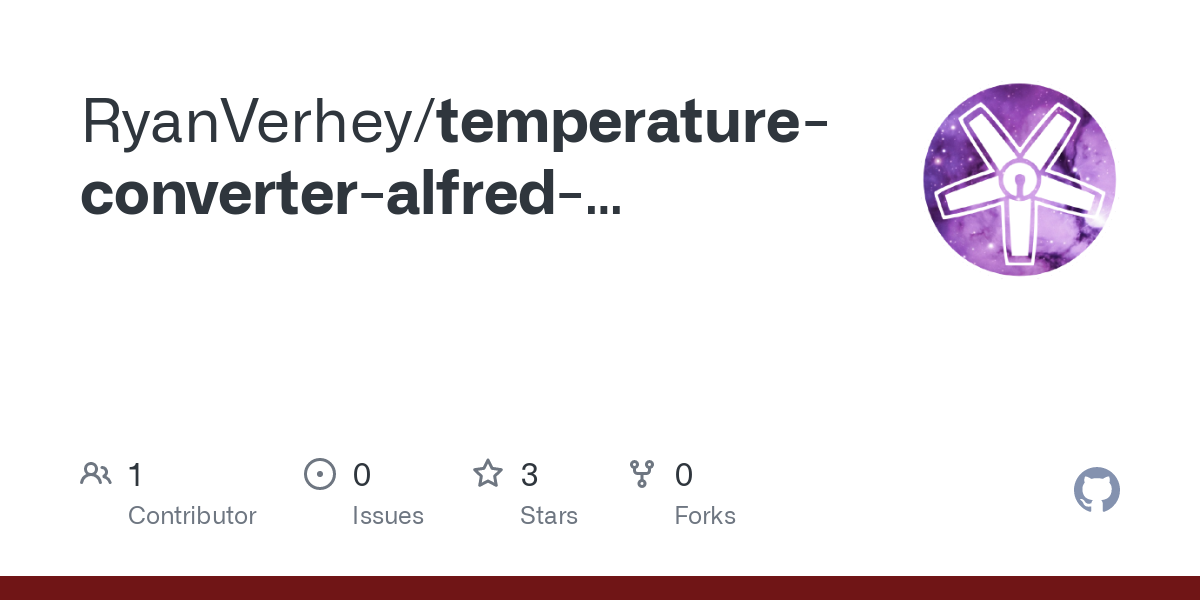 Contribute to RyanVerhey/temperature-converter-alfred-workflow development by creating an account on GitHub.

A better unit converter Download V0.6 contact thijs@designandsuch.com for questions, bugs, ideas and such try out the demo There are more unit converters available. but i didn't like the lack of speed due to the feeds. Thus i redid one myself which...

I just installed Raycast, and the speed is impressive, but I feel like if I imported everything I have in Alfred over to Raycast, the speed might suffer.

The extension API is interesting…
Raycast has a very good API with complete models for the important components you would need to make an extension. You can in fact use them to build an entire user interface if your want - or you can skip them entirely and just provide text to be output.

Compare that to Alfred, which is like “these are the arguments. kthxbye!”, and you’ll see right away that you’re able to make smoother extensions and possibly do things that aren’t possible with Alfred.
BUT it runs the extensions in Node, which is non-ideal due to bloat and slowness.
And I can’t find any extensions that do things that Alfred can’t do…

And why would I need to make a Pull Request to the main Raycast repo in order to publish an extension? Wouldn’t it be better to make a PR with some metadata linking to my own repo? I feel like that’s TOO centralized.

Also, the business plan makes NO sense. I’m assuming there’s a reason for that; obviously, the investors have information that I don’t have, and it’s quite possible that there’s a pivot coming.
… Which is the problem. I don’t trust that Raycast will be available in this form in the future.
If they just charged $29/yr going forward I would trust it a lot more.

So I’m trying it out, without spending hours porting my config. Some of the native extensions are quite good, but if I move back to Alfred I won’t have any problems replicating the functionality of these extensions - though the UX available to the extensions might be impossible to replicate…

why would I need to make a Pull Request to the main Raycast repo in order to publish an extension?

Maybe this is their vetting strategy.
Since they seem to have an eye toward business, perhaps they want control of what users can install on corporate computers.

Nah, it would be enough to allowlist the commit hashes.

I wonder when it’ll be common to just use Docker as the extension environment…
“requires Docker” sounds weird right now, but maybe not in a few years…?

Raycast vs. Alfred or Launchbar?

Someone made Recast themes for Alfred
https://www.packal.org/theme-tags/raycast

I think Alfred’s default theme does look a bit outdated, but the “Alfred Modern” theme that they added around the time Big Sur was released takes care of this issue for me

You’re right. The Alfred Modern theme is an improvement I had overlooked!

Are you using Alfred as an alternative to TextExpander?