Readwise has said that their Reader read-later app will enter public beta soon. No date given except “soon”. This means anyone would be able to onboard themselves into Reader. Readwise will be required. It seems that in the future Reader will be the core product and Readwise will be a feature included with a Reader subscription.

A new feature to be released soon [edit: it’s already available] is viewing YouTube videos in Reader side by side with the video’s transcript. Inside Reader. you’ll be able to highlight and make comments on the transcript. That could be very useful.

Ha Ha Ha. I got my invite to the private beta a couple of days ago. I guess I can revel in the exclusivity for a few minutes longer.

It’s going to take me a while to figure out if I can make it a part of my workflow, but it already does the thing I need it to do, which is highlight and take notes on PDFs and de-DRM’d epubs and port it all into Obisidian.

I signed up for the beta and got an invite yesterday. But I then realized - I suspect this will cost money each year and I’m trying to simplify my apps and reduce my subscriptions. This does neither. I’m torn

It might simplify your apps if you already use a read-it-later service and an RSS aggregator. Reader can do both so that would eliminate 2 apps in favour of the 1.

I switched from Pocket to Reader, but won’t be moving my RSS aggregator (I use Reeder for this), so for me it didn’t cut the number of apps.

It did improve my quality of life though - moving newsletters into my dedicated reading app is so good! No more stuff to read in my email inbox. Yey!

Yes, it will cost you money every year. I’m giving it a year to prove that it’s worth the money. (I gave Day One, Ulysses, and Bear each a year and ended up turning them off when it was clear that as excellent as they were, they didn’t do enough for me to justify the outlay.)

I’m less about simplifying my apps than simplifying my workflow. For instance, as I’ve noted ad nauseam, I use Devonthink, Obisidan, Notebooks, and Finder to manage the same set of Dropbox folders. Each of those apps has its place in my workflow, and it would be a bumpier ride if I tried to use just one of them to do everything.

There’s one way I hope Readwise Reader will both reduce the number of apps I use and simplify my workflow: reading and highlighting epubs and pdfs on both my Mac and my iPad and getting those notes and highlights into my collection of markdown notes. I’d basically given up on being able to do that simply and straightforwardly.

I don’t know if I will use Reader as an rss reader and read-it-later service. At the moment I use News Explorer and GoodLinks for that respectively and I’m not sure I want to switch. What I may do is use Reader for articles and feeds that are directly related to the areas in my personal syllabus and its areas of focus and use the other two apps for casual reading.

ETA: @Pupsino is 100% on the money re newsletters. I’m in the process of moving as many as I can out of my email inbox and into Reader.

Re your workflow, I asked the Readwise folk and once Reader is out of beta they’ll be doing an export function for marked up pdfs, so it is on its way. twiddles thumbs impatiently

once Reader is out of beta they’ll be doing an export function for marked up pdfs, so it is on its way.

For my workflow, that would be a nice to have, but not a must have. For me, highlights are the first step in note-making, not an end in themselves. Once I’ve distilled them into a restatement of the concept in my own words, I don’t need to see them if I re-read the source. And while it’s interesting to see what I found worthy of a highlight a few years back, sometimes those highlights force me down a path that keeps me from re-considering the matter afresh. So long as they get gathered in a place where I can work with them, I’m where I need to be.

ETA: I’m trying to figure out the best way of getting newsletters into a filtered view. Some of the ones I subscribe to have a parallel rss feed, which makes it easy, but some of them don’t.

ETA: I’m trying to figure out the best way of getting newsletters into a filtered view. Some of the ones I subscribe to have a parallel rss feed, which makes it easy, but some of them don’t.

Here’s the current filter view search operators (it’s not easy to find so I’m sharing in case you’ve not come across it. I’ve just tried type:email in my library and that would work for me, but like you some of my newsletters are via rss, and this search wouldn’t pick them up. I can’t think of a value that would be common across both “email newsletters” and “rss newsletters”. How would an app know that they’re the same thing delivered differently.

A more crap way to do it would to be tag the relevant rss feeds and tag the emails and then set up a filter with that tag.

For the non-rss ones (which is most of them) I’m using author:“whatever Reader’s metadata is showing as the author” and it’s working well.

ETA: Aha! I just did a test— author:“author name” works just fine with the rss newsletters, too.

Here is the website to register for the public beta of Readwise Reader, just made available. 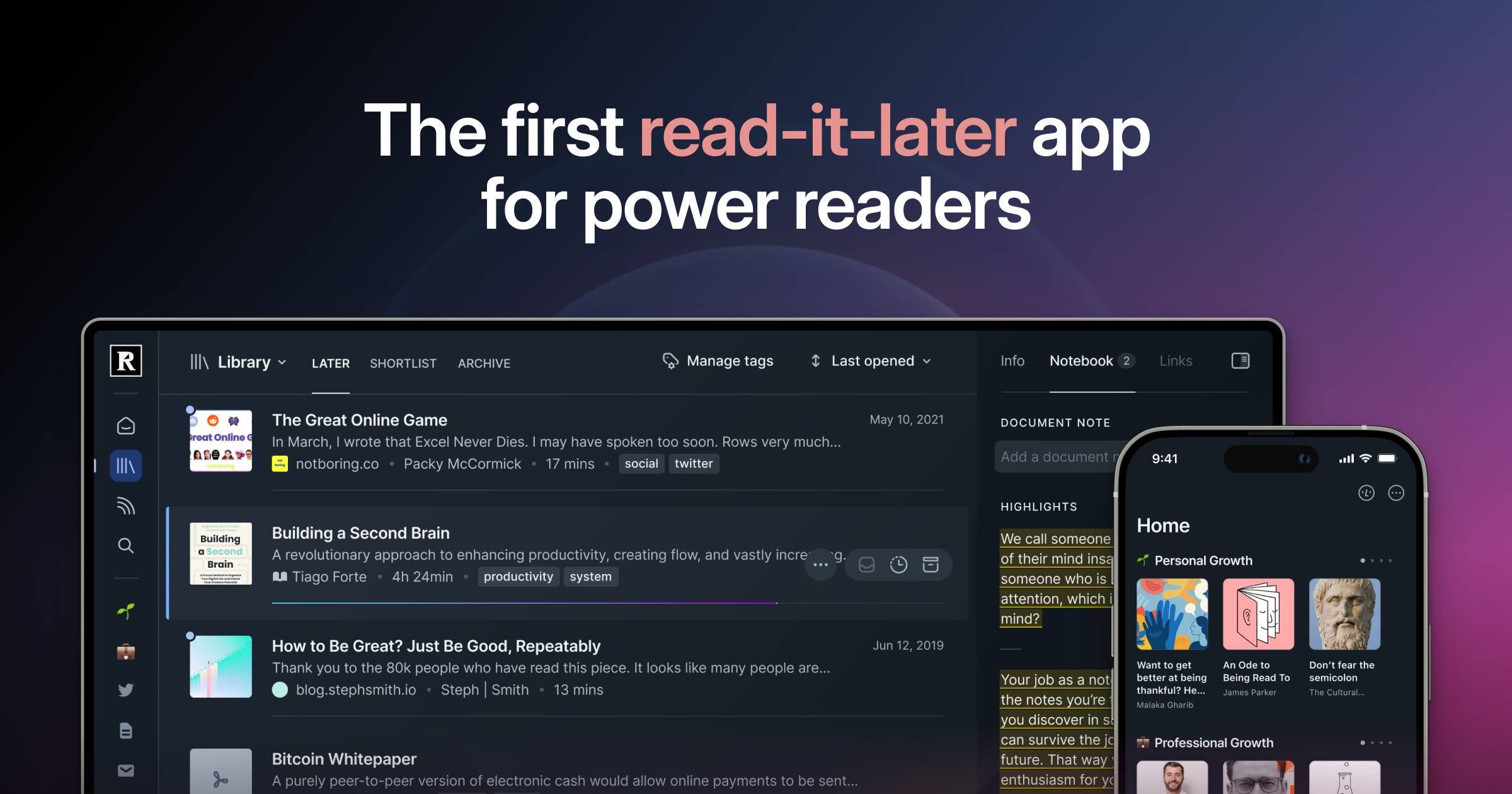 The Reader app is now in the App Store (check each platform). 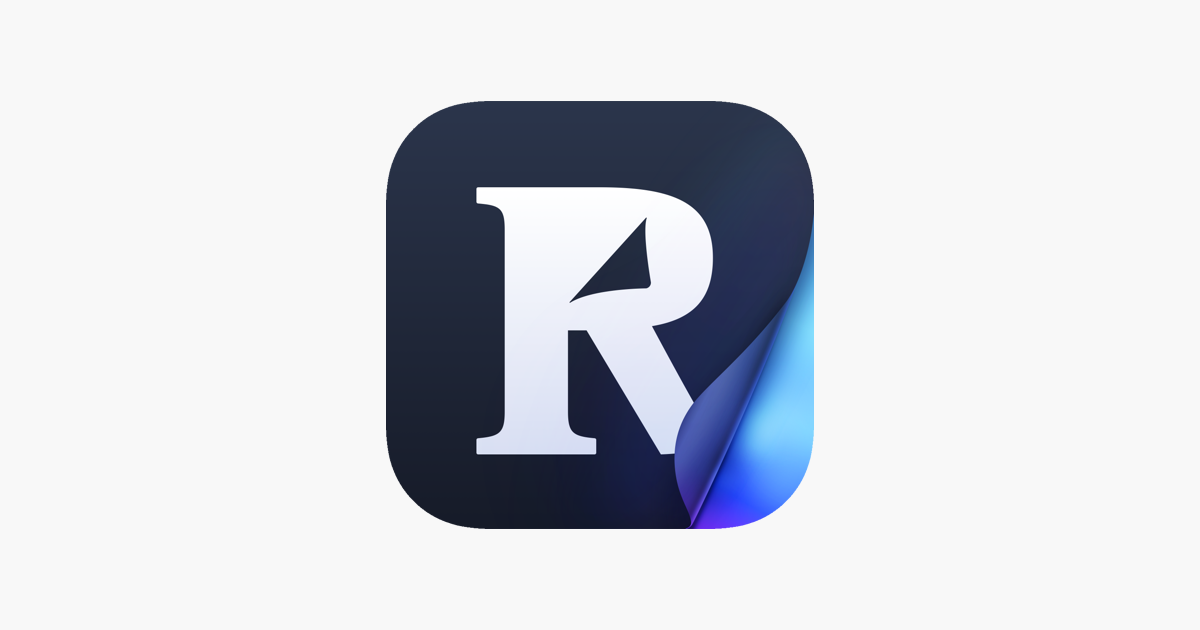 ‎Readwise Reader is the first read-it-later app built specifically for power readers. If you’ve ever used Instapaper or Pocket, Reader is like those except it’s built for 2023 and brings all your reading into one place including: web articles, email...

This is open to anyone who wishes to register.

I got in the private beta late last week. I hadn’t even used Readwise so I’m on a 2-month trial. I have to say that I would get confused because I had to think about what was Readwise vs Reader. On top of that, I decided to dive into Obsidian because of the integration of Readwise. I ended up making a big grid of how I would use each of the features.

A part of me feels like it will be great but I’m also tempering my enthusiasm to make sure that I will use it in practice vs it being conceptually great.

I was loving Reeder for my RSS feeds and I do like it over Reader but I think the benefits of Reader will ultimately win out if I stick with Obsidian.

Not that it matters now but I use Kill The Newsletter to turn email subs into RSS feeds and then getting those into Reeder (which I now send to Reader instead). Getting numerous newsletters in the inbox is not the way to go for many people, specifically me.

That’s an interesting strategy to bring certain valuable RSS feeds into Reader vs the casual entertaining stuff being left in another app like Reeder, that I’ll never highlight or keep after reading.

Here’s my thinking: I need to dial back on Twitter for all kinds of reasons but still need something to scroll through aimlessly while I’m waiting on line at the grocery store. There are things that I need to read with intention and focus: that’s what Reader is for.

But I then realized - I suspect this will cost money each year and I’m trying to simplify my apps and reduce my subscriptions.

The company has said in the past that they’re expanding functionality and this will mean a higher subscription fee. They’re going to ‘grandfather’ existing subscribers into the current ‘low’ price for life, so that might be a reason to jump on board now (although how successful a commercial strategy it is to fix a subscription forever remains to be seen).

It’s like $100 a year here in Canada. I can’t justify that for what it is. I get that it’s worth that and more to people, but for me personally, I wouldn’t use it enough to justify it. I’m also a little “spock’ian eyebrow” with the “one app to save them all” solutions.

I’m planning to keep Reeder alongside Reader. I have a lot of RSS feeds and don’t want them cluttering up Reader. Many I just skim, then I send the posts I need to look at properly to Reader.

I’ve actually (just yesterday) moved all the “feed” items into “library” in Reader (via a bulk action to move it all to my inbox). I send my newsletters to the feed section but I decided it’s easier for me to just have one area to check. Time will tell if that was a good idea!

I tried Kill the Newsletter but I couldn’t get it to work, I must have done something wrong. Substack newsletters are quite good as they often allow an RSS feed, which I like.

Right now, I stripped down a ton of my RSS feeds. I do like Reeder better (and I am having a timing issue with Reader right now). Given that it’s still in beta, I may go back to Reeder and then push only those select few newsletters to Reader that I feel are worthy of keeping. I like the idea of one app but if it’s not yet performing well, it’s silly to keep using it. I do get other value from Reader so it’s not a huge deal.

I’ve been using the new Readwise Reader app the last couple days and I’m absolutely smitten. I’ve been using Readwise service for a while because of its fantastic automatic forwarding of Kindle highlights to Evernote, and their new Reader app is really well integrated. I’ve now set it up as my default RSS feed and I love seeing all my highlights making their way over to Evernote automatically. I’ll gladly pay whatever they want once the beta is over.

I’ll gladly pay whatever they want once the beta is over.

I’ve had the exact same experience! The benefit of subscribing now is that you will be grandfathered into that packaged price as I think they will increase the price in 2023 (or have separate pricing for Reader). Also, they are very generous with their discounts – if you fall under academia, military, first responder, non-profit etc, they will apply 50% off.