The recent Homekit episode of MPU reminded me that I needed to get a security light for the front of the house. I’d been looking for an excuse to buy an Aqara hub, but was a bit disappointed when it turned out that Aqara only do indoor bulbs.

So, are there any other thoughts or suggestions? I’d obviously like the solution to be Homekit compatible.

I don’t own them, but you should be able to use these motion sensors to control the lights.

If you’re looking for an excuse to buy some stuff and get into HomeKit, that would be what I would do.

If you just want a motion sensor-controlled light, you could use something a lot cheaper, or even solar powered.

If you want to pair it with a camera, and don’t mind spending a bit on two items, I put a Eufy Pro cam outside, above our garage, and put the garage eaves lights on a Lutron Cassette switch. The camera has a motion sensor, and the camera and the switch both can tie into HomeKit, so I created an automation rule so that when the camera detects motion at night, it turns on the outdoor lights above the garage door.

Lots of ways to address, this but the first thing to consider is where should the motion sensor be placed vs where is the light fixture. If they can be in the same place and still trigger appropriately, then an old-school method may be the best option for security (because it is the most reliable).

(And even if you have to split them up, the most reliable solution is a separate, hardwired detector. I did this for my garage lights and it worked for 20 years. Just last month the stalk that holds up the sensor broke, so now it only triggers when you get pretty close.)

If you have to split them up, and you don’t need 100% reliability, then a HomeKit solution is fine. I’ve got a Hue bulb outside under an awning, and an outdoor Hue motion sensor near it (but not under the awning).

I had regular reliability problems until I extended my wifi network in the basement. Despite having a a wifi access point less than 10 feet away, the bulb would often revert to "not responding. Adding another access point even further away fixed it. I did not expect this problem since I got a good wifi signal in the backyard (before I extended the network), but clearly the wifi signal back door was not consistent enough for the Hue bulb. Now it’s reliable in the sense that it turns on with motion, though as with all things HomeKit, sometimes things go awry.

This is one where a $50 U.S. motion-sensor fixture from Home Depot should fit the bill. I have two units with two flood lamps in each, and they have worked fine in all weather for years and years. No Home Kit; no network; no fuss. 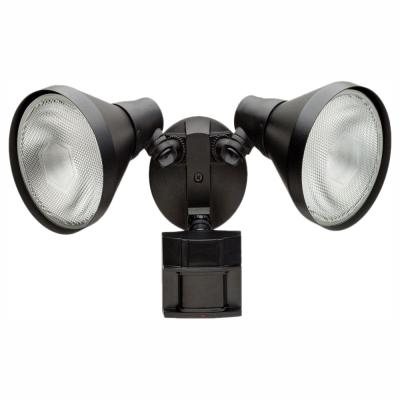 Depending on where you live it will be the wind, snow, heavy rain, cats, raccoons, possums, squirrels, owls and deer that trigger the lights – not something you need a computer to alert you about.

I use (three) outdoor Hue lights, each controlled by their own Hue outdoor motion sensor.

(I have way more Hue lights inside, so a nice Zigbee mesh)

I’ve got a Hue bulb outside under an awning, and an outdoor Hue motion sensor near it (but not under the awning).

I had regular reliability problems until I extended my wifi network in the basement.

That’s weird: Hue bulbs use Zigbee (or optionally Bluetooth for newer bulbs), not WiFi (and the hub is connected via an Ethernet cable).

I agree. I have no idea why adding another wifi access point (Eero) fixed the problem. Maybe it didn’t – and it was just dumb luck. Or perhaps what continually failed was HomeKit’s ability to coordinate the automations that control the light. (I don’t use Hue’s app for automation.)

HomeKit and Hue are terrible at telling the user about what’s really gone wrong. It’s one of the most annoying things about setting up home automation!