For working I’d like an app to block certain websites and apps for a set block of time. A buddy recommended FocusMe and I’m fine paying a subscription but wondering what else is out there. Suggestions?

I use Freedom for this. You can configure one or more sets. Sets can be one or more sites. Blocking can be immediate or scheduled later, or recurring.

My main use: I block all the news sites to shut them up during the day when I don’t want that distraction.

I’ve used Focus, I like that I can create many custom sets,
ie, “unblock websites for 10 minutes every hour”, and “unblock between 1-2 pm”, and “off on weekends”, and “off after 5pm”.
I think it only works for a list of websites, so it blocks/unblocks all of them.

Of course you can do it all for free by modifying your hosts file on your computer.

damn, forgot to mention that.
That was going to be my initial reply, but then my ADHD kicked in…

I’m a fan of Brad Jasper’s Focus app as well.

It’s available directly from the developer and through Setapp.

I used to use freedom, and focus before that, but I’m now using Cold Turkey Blocker which I much prefer.

I like the fact I can block a whole site but whitelist a URL so, for example, I could block reddit.com but still let reddit.com/r/python through for programming questions while I work.

It’s got a ton of features and it’s a native local app. Nothing in the cloud.

It’s Mac and Windows-only, so if you need iOS support freedom is your best bet.

You can even do it without an App if you use the NextDNS service.

They introduced this feature today:

Introducing Recreation Time — only allow some websites, apps and games during a specific time period each day of the week. E.g., only allow Facebook, YouTube, Twitch and Fortnite on Wednesdays and Fridays between 6:30pm and 8pm, and on Saturdays and Sundays between 1pm and 8pm. https://t.co/5OZHaglFoh 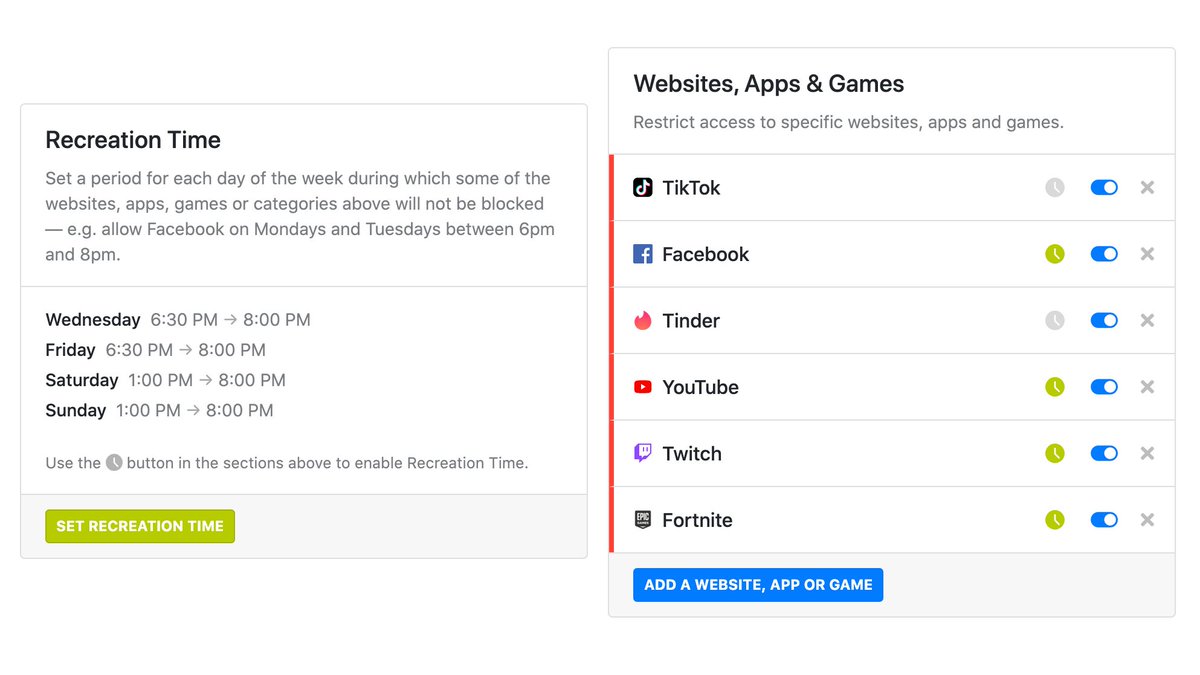 I tried Focus and Freedom. Freedom has a nice 50 % sale on life time license right now and works on iOS as well. But the implementation of Pomodoro technique is lacking and it works as a VPN on iOS (so I have to disable my normal VPN). I sometimes need to pause the session and Freedom requires you to quit it on all devices. Freedom is a little too hard core for my taste

I went with Focus in the end. It is just more frictionless and I use it with Be Focused Pro since I can start it with a shortcut that also triggers a shell command to start Focus and it syncs to iOS so the timer is running there as well and that is enought for my mind to not fiddle with the device. Focus is not really cheap since the license is 39$ for only 12 months of updates (I do not have SetApp). Maybe I will find time to improve the workflow since Focus has nice scripting abilities.