Remote support for non-Mac - can anybody recommend a reasonably-priced app/service?

I mostly help people with setting up email accounts and such, as it’s next to impossible to talk most people through on the phone. I was using the free version of TeamViewer, but apparently there’s a threshold where once you connect to a certain number of different IDs they say you’re “commercial” and shut you down.

I use this software no more than once a month or so, so I can’t cost-justify TeamViewer’s prices - but I wouldn’t mind paying something. The challenge is that these are other peoples’ computers, not my own…so I need something with a client installer that’s not too onerous.

Anybody have any recommendations?

Jump Desktop, which is a one-time purchase (but you need to buy separate clients for Mac and iOS). Both are reasonably priced.

A free Jump Desktop Connect is required on the target machine.

I also switched from TeamViewer because of the same issues and their broken AI labelling accounts randomly as commercial, and have not looked back. Jump is great on both Mac and iOS.

I often simply use Zoom for that.
The other people could share their desktops, and from my point of view, the great advantage is, that the people I help with their problems have to do it under my guidance, and often could recognize later, how to do it by themselves.

Does the end user have to sign up / register for Jump Desktop Connect? A good portion of the time what I’m doing is setting up their email for the first time - so that’s not great if they need to sign up for something.

Teamviewer have a free tier for personal use only. I do think with a minimal subscription you have access to unlimited PCs without the other side having to pay.

You can additionally > Ask to Control screen and take over yourself if it doesn’t work,

The Zoom option is likely the lowest threshold solution. Lots of people have it, and it does the trick

Jump Desktop Connect, is free and doesn’t require an account.

It will display a code on the screen which they relay to you and then you initiate connection using that code, they have to confirm on their end.

This is a common scenario for permission based remote connection for tech support.

If it was a system you connect to a lot and wanted unattended connection, then you would have to have them add your email as a validated user. Not that hard, but unnecessary for the scenario you describe as your use case.

Teamviewer have a free tier for personal use only.

That’s what they say.

What they do, in practice, is lock down your account and mark it as ‘commercial use’ if you connect to a single remote computer more often than they (or they AI) think you should (and these limits are not explained anywhere).

I’ve been connecting to a single iMac that I keep in another apartment, sometimes a couple of times a day or, at the most frequent, a couple of times in an hour when I needed something from the machine, and then sometimes not connecting to it for days on end (!) only to eventually end up being marked as a commercial user and all connections being refused. I suppose if you connect to many different machines you will end up in the same situation sooner or later.

Their support is useless if you are not a paying user so that restriction is difficult to remove once you end up with it. Deleted my TeamViewer account and moved on, bought Jump Desktop and have not looked back.

As @SpivR says, you can ask your friends to install Jump Desktop Connect and share the remote link with you (which contains a unique code, similar to how TeamViewer works). You will need to have a paid copy of Jump Desktop available locally.

I don’t think your friends need to be logged in for this to work (login is needed if you want the machine tied to your account, you want unattended logins and you connect to it frequently) but as I cannot reinstall Jump Desktop Connect right now, I’m not 100% sure on this but this should work.

You can try installing the free Jump Desktop Connect on your Mac just to see what the setup process looks like. 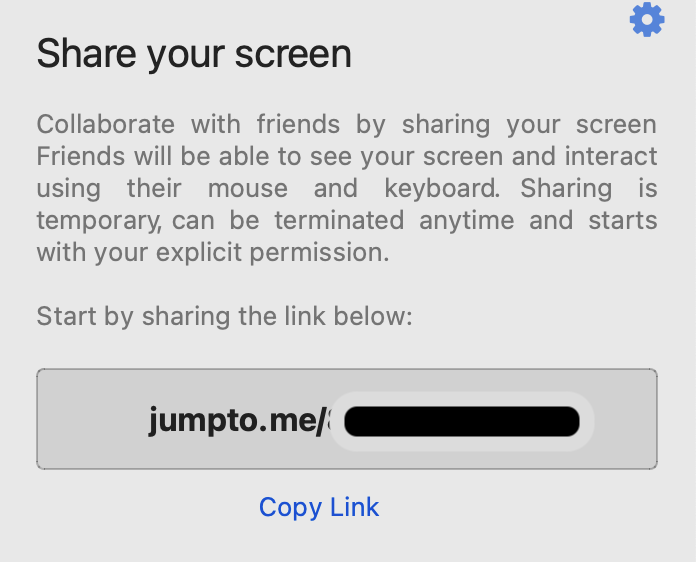 Jump will also connect to VNC servers and will act as a VNC client (just in case you need this, some machines may have already been configured with a VNC) but works best using its own Fluid Desktop protocol.

Jump Desktop also has Windows RDP protocol support for connecting to Windows machines without installing a remote agent. The basic Windows OS version does not have RDP built-in though, but VirtualBox does.

Fluid protocol supports audio, I’ve launched live videos remotely and not even realized I wasn’t watching on the local computer.

I’ve often used Zoom this way, too. The biggest problem on a Mac platform is most of my clients have never done screen sharing before, so I have to walk them through the process of giving Zoom access. For some clients, this is really difficult. I don’t know if Windows has the same issues.

I’m happy that Apple has improved their screen sharing quite a bit recently. And now that I can also control someone else’s screen, it’s great for solving tech problems that my clients will never need to know how to do.

A few years ago I did a big survey of remote desktop access clients. Team Viewer and LogMeIn (now GoTo) were the top contenders, and both of them were bad enough to be unusable for my purposes (reliability was the biggest problem). I’m glad to hear that Jump Desktop is now in the mix.

The biggest problem on a Mac platform is most of my clients have never done screen sharing before, so I have to walk them through the process of giving Zoom access. For some clients, this is really difficult. I don’t know if Windows has the same issues.

Ran into that with TeamViewer too. There are three separate security settings that you need to configure in System Preferences to allow TeamViewer to work. Windows just pops up a window that basically says “this program wants to make changes. Is that okay?” and the user clicks “OK”. Not nearly as secure, but for end users looking for remote support that’s not their concern.

The thing with Zoom, hard as it may be to believe, but not everybody has it. The last several people I’ve helped would’ve had to download and install Zoom.