Review of the 2nd Generation AirPods

I love my AirPods. In fact, I just about loved them to death. By the time they were about two years old, I had used them so much their battery life had declined to the point where I was only getting about 90 minutes of listening time out of them. One of my uses for them is going on 2-hour walks, so this was a problem.

I use my AirPods every day: walking to and from work, exercising, taking longer walks on the weekends. They’re one of my most used devices. I use them enough and find the advantages over wired headphones big enough that replacing them if they were lost or broken would be a top priority.

Given how much I use them and the state of my original AirPods I was definitely in the market for some new ones. I hoped that I could nurse my existing pair along until Apple announced an updated version, but if it got to the point where my original pair became truly unusable, I would have bought an identical set of replacements.

So when Apple released the 2nd generation AirPods I hardly even bothered looking at the spec sheet. I just went straight to the Apple website and ordered a pair. The only real decision was whether to splurge on the new wireless charging case (they’re available both with a Qi-compatible wireless charging case and a regular case). I was a bit uncertain about whether the extra $40 would be worth it, but I decided to give it a go.

The new AirPods look identical to the old ones. The wireless charging case is slightly different, with the LED indicator migrating from inside the case to the front of the case and the hinge now being made out of aluminum rather than stainless steel.

On the inside, the new AirPods support “Hey Siri” to activate the Apple voice assistant. They’re also advertised as having longer talk time, but I hardly ever use mine for phone calls. 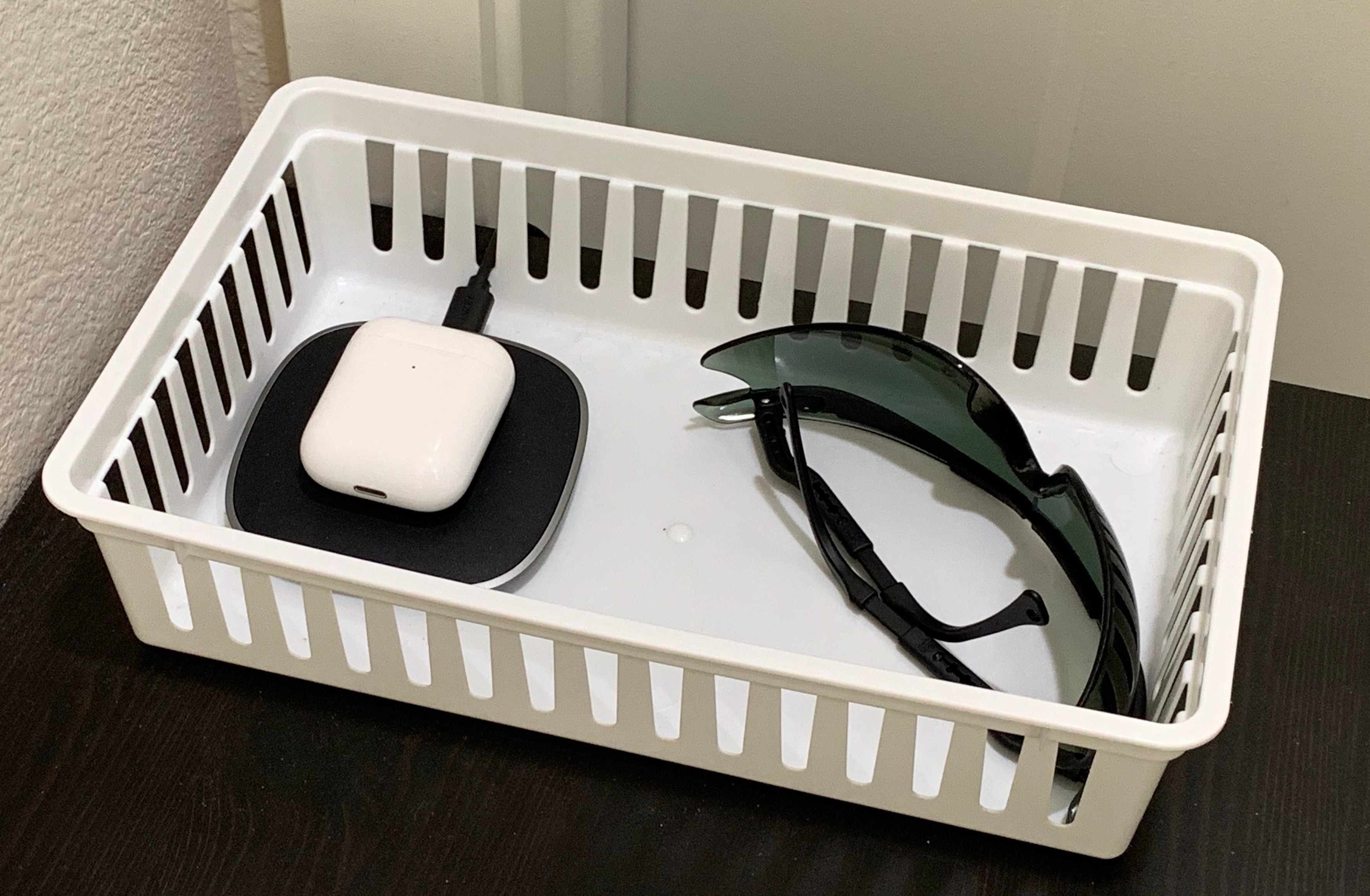 I’m glad I got the wireless charging case. I bought another Qi charger and set it up in the hallway/mud room where I leave my stuff when I come home. It’s much easier to just drop the AirPods case on the charger every day than it is to try to keep track of how much battery life the case has left and remember to plug it into a lighting cable every couple of days (with my old AirPods I’d been caught out by forgetting to charge the case a couple of times).

When you put it on the charger, the LED comes on momentarily, but it doesn’t stay on. It would be nice if that would display colors indicating “charging” and “charged” like the old MagSafe connectors on Mac laptops.

The “Hey Siri” functionality works well. While I still feel self-conscious about it, I may be more apt to use “Hey Siri” in public than I was to activate Siri manually. The activation phrase makes it obvious what I’m doing in a way that tapping an AirPod did not.

Given the state of my old AirPods, perhaps the biggest feature of the new ones is their battery life. The advertised listening time isn’t any different on the new models, but by merely being fresh out of the box their battery life is much greater. On my old ones, 90 minutes of listening to podcasts was enough to give me a low battery warning. The new AirPods are still above 65% after an hour and a half.

I’m very happy with my new AirPods. Of course, aside from battery life, I was happy with the old ones. Features like “Hey Siri” and Qi charging are just gravy.

Nice review! I am using voice-activated Hey Siri a lot more than I ever double-tapped because of the reliability. It’s reliable enough that I can speak low enough to not be overheard or noticed in some public situations. It’s also nice while dozing in the same room as a sleeping baby.

Edit: I am charging my AirPods on my nightstand using a Nomad Base Station (2 charge spots + a Watch charger.) I’ve noticed the same thing; I had a little charge anxiety with the case that’s completely gone because there is no way the battery can drain enough so long as I sleep in my own bed every couple of days. My old bundle of cables is in my bag so I can charge everything when I’m traveling.

Apple’s product page says, “More magical than ever…” … Are they?

[I’m trying to be humorous here, not snarky! – Well, not overly snarky

How do they sound in comparison to your v1 ones?

My real hope is that they have higher quality sound – Would love for that to be in outbound voice quality on calls and in listening. I’ve not owned a pair but have had people call me using them and switch mid-call to another brand of device and their voice sounded better on the other device … I think it was a Jabra Bluetooth headset.

I don’t know if my ears can detect better quality audio; but would love to know my waiting for v2 gained multiple perks for me before I shell out $200.

“Hey Siri” on the new AirPods:

I have always used Siri a lot, but almost never with the voice command “Hey Siri”. It’s always been more reliable to press the button on the device, rather than get the device right in front of my face and then yell at it.

But “HS” on the AirPods is a game-changer for me. Because I don’t have to do anything. They are already in my ear. I don’t have to push any buttons, look in a specific direction, raise my wrist, anything. I just think it and say it. That removal to the barrier of entry is amazing.

Now, I’m out and about and my hands are full. I will think nothing of using “HS” to pause, play, send a text, make a call. When walking the dog, there’s something very relaxing about just casually strolling, and then think it/say it, without pulling out or tapping anything.

Yes, it’s not worth upgrading from a working pair of original AirPods just for this, but if you have another reason, it’s fantastic.*

The 85% of the time “Hey Siri” works with the AirPods!

Personally, I’ve had an even higher success rate than that (even in noisy environments). The only time it seems to really have trouble is when there’s a lot of wind noise.

Personally, I’ve had an even higher success rate than that (even in noisy environments). The only time it seems to really have trouble is when there’s a lot of wind noise.

My problem is rarely Siri understanding me. My problem is that often, if the AirPods are in my ear for a good bit without me listening to audio, when I try to invoke Siri it doesn’t connect. It sometimes takes me 2 or 3 tries before it makes the connection - without me adjusting anything on the phone. but overall, I’m loving them.

Have NO experience with AirPods and have generally had poor experience with cheap earbuds held together by a wire across the back of the neck connecting the two; popping out while running or bicycling. So my biggest concern with AirPods–which have NO belay line between the two–is not staying in the ear while moving vigorously and falling to the street/ground. Can you allay my fears? Do you find they stay securely in place?

I would say most people don’t have any issue with Airpods falling out. The cord is what makes wired earbuds unstable, not hanging on the ear. I think wireless charging or not is mostly a personal preference affected by how often you listen thus need to charge the case, how inconvenient it is to run an additional charge cable, and if you have a natural spot for a charging pad.

Perhaps the Powerbeats Pro might be a better option if you’re going to be quite active when using them, they apparently do stick in the ears quite well from all the reviews I’ve seen of them.

If you’re set on AirPods then perhaps something like this might give you some more confidence that they’re at least not going to go missing while out cycling: https://www.amazon.co.uk/Adsorption-Anti-Lost-Compatible-Protective-Headphone-White-Black/dp/B07HNQG8DZ/ (have a look round amazon / eBay; there’s loads of options, this was just the first example I plucked out).

Although this conflicts with the Powerbeats Pro suggestion (as that case isn’t wireless chargeable), AirPods-wise I’d go for the wireless charging case. It’s not that much more expensive and things are moving that direction. After I upgraded my phone from a 6s to an XR one of the first things I did was buy a wireless charging pad. It is rather nice not having to faff with cables although granted, not an essential in life!