It looks like the Samsung m8 studio display was just announced. About half the price of the studio display, 32" 4k monitor with audio/webcam built in. Also has built in Tizen interface. Seems like a good option for those of us not wanting to spend so much on the monitor, but still want USBC charging, webcam, 4k, etc. (For reference, I went with the LG Ergo 4k 32" monitor recently when on sale at Costco with usbc charging and love it. The form factor is great, at 1:1 which is what I run I have so much real estate and very crisp. Have BTT setup to snap windows with keyboard commands to 4 corners, much preferred this to the 38" Ultrawide setups.)

Given the Costco return policy, and with the built in webcam and Tizen may see how early reviews are and consider taking back my LG Ergo and try one of these out. 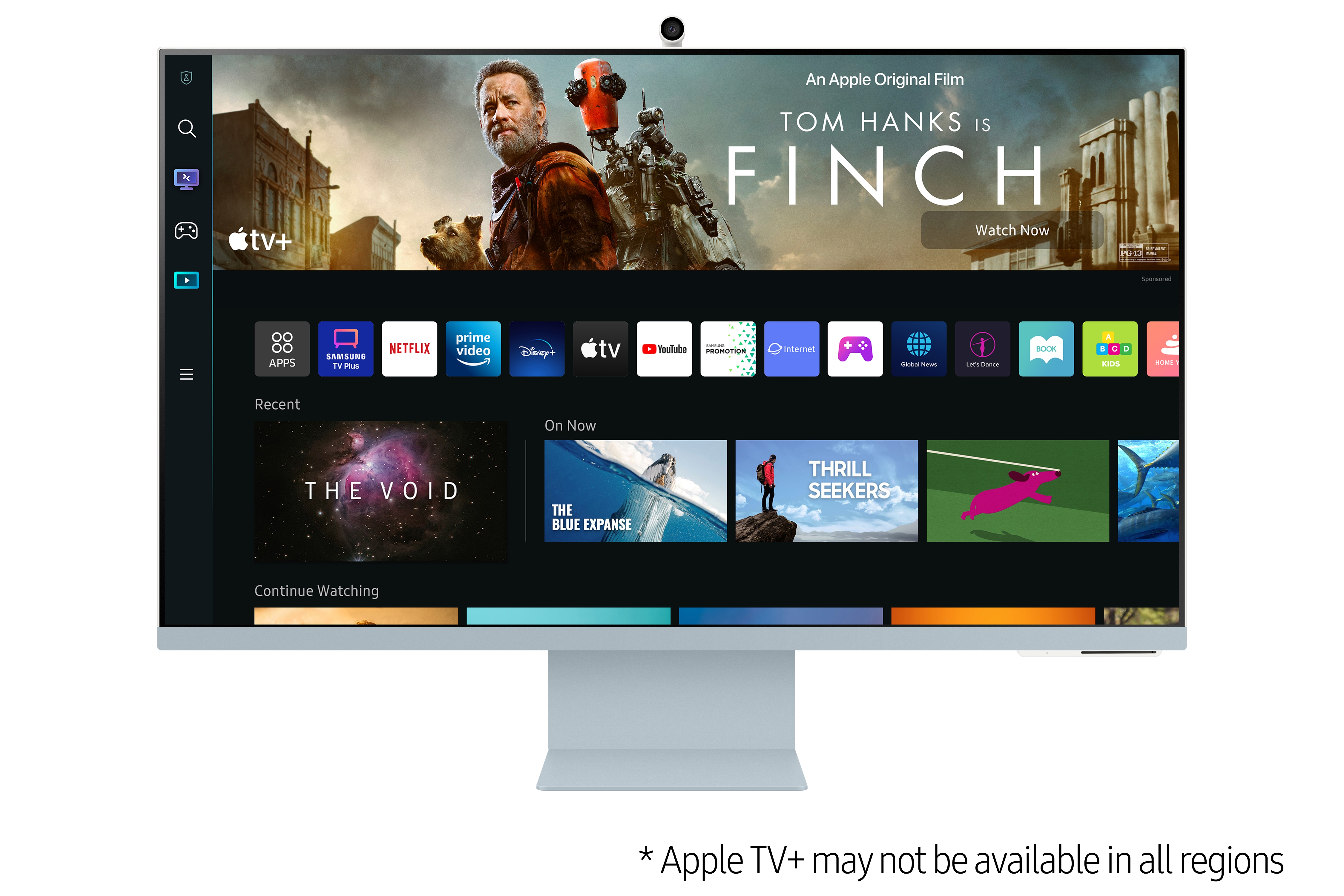 Discover the latest features and innovations available in the 32 inches M8 4K Smart Monitor and Streaming TV (Blue). Find the perfect Monitors for you!

I returned it to Amazon without thinking twice within a few days.

For starters, the resolution is wrong for Apple interfaces, (should be 6K at 32") so you’re going to see very grainy text throughout. If you work with text, it’s a pain.

Second, the general image quality of the display is pretty pathetic, at least if you’re coming from recent Apple panels. Colors are way off (and I am by no means a color-expert!), the lamination of the screen is obvious from standard sitting distance. The M7 was not an IPS panel either so unless you were sitting right in front of it, it had very uneven illumination.

Third, the general build quality was pretty pathetic. A wobble fest. Absolutely everything was plastic, and not even an expensive kind of plastic.

Fourth, the so-called operating system on that thing was usable but not great.

They may have improved things since, of course. It also all depends on what you’re used to and what you’re comparing it to. But for $700 I would definitely buy a used Thunderbolt Display in good condition over this, it will probably be better on all counts.

If I recall correctly, the Studio Display is 5K, not 4K. Whether or not that is important to you probably depends on your eyes, work, and preferences.

I’ve been frustrated by the articles claiming this is a great “alternative” to the Studio Display.

This display is not 5k. It’s 4K, and it’s too large. Pixelation will be obvious at any reasonable viewing distance. Does it include a wide colour gamut? Are those colours reasonably accurate? These are the perks of the studio display.

The Verge kept saying this is a perfect complement for a 24” iMac, but how? Resolution and colour don’t match. It’s a display. By any metric, these are the most important features.

Sorry OP. Not upset with you, but just needed to get this off my chest.

As an alternative to other sub-$500 4K displays, the M8 is interesting and cribs the new iMac design. Looks cool. Not at all related to the studio display.

Comparing a 32” 4k monitor (with several attractive features) to the Studio Display (27” 5k) is like comparing a new high-end pickup truck to a new BMW sedan. Both are good products, but different products for different customers.

No doubt the Samsung M8 with the many features you nicely described will appeal to many people. But it will not appeal to someone who is used to the 27” iMac and wants the 200+ pixels/inch resolution that works so well with macOS display text scaling.

I did not realize the importance of the 200+ pixel/inch pixel density for macOS text scaling until I bought and later returned a very nice Dell U4021QW 40” ultrawide monitor. It had great features - Thunderbolt connection, full-blown hub with many ports, attractive design, 5k2k resolution (5120x2180). At a 40” diagonal display size, the pixel density was 140 pixels/inch. The text sharpness of the 27” iMac just was not there.

That is literally my chief requirement for a monitor and the vast, vast majority on the market cannot claim anything like this. The ATP guys had a moan about this (and rightly so, too) last (edited) episode. I personally don’t care much if it’s 4K or 5K or 6K, so long as it has a density around the 200 PPI mark. I currently use a 27" 4K LG and it’s OK. Any larger in 4K is not fine by me.

Just for the record, I have a 32’’ M7 and am very happy with it. I got it in a hurry and given the not stellar reviews I expected to return it. But turns out its decent for me although not great. (I am not doing creative work, only coding and deck production stuff)

I’m in the camp that thinks resolution must fit the display size and that 24" 4K, 27" 5K, and 32" 6K monitors are doing it right. But I shudder when I remember the big heavy expensive NEC 19" gaming monitor that I thought was great.

I have a hard time keeping track of all the display brands, but if NEC is the photography-calibrated one, then they make some 4k 27" monitors I actually like. I’ve got friends with those, and they’re some of the only 4K monitors where I don’t notice the pixel loss. But I think it’s because the colours are so accurate, and the people I know who use them use them in very controlled environments on very expensive stainless monitor arms. So they always look exceptional in their context, even if the PPI could be higher.

The 19" NEC I’m talking about was from 20 years ago, had a Cathode Ray Tube in it (aka NOT flat screen), and weighed a ton.

Yeah, I don’t have fond memories of most of my old CRT stuff either. (Although I will admit the black levels were nice.)

If the M8 reviews are halfway decent then I’ll likely pair it with my Mac Studio purchase by the end of the year.

As much as I love the Studio Display i’m also upgrading to a Pro phone and so something has to give.

I’ve been eyeing this since it was announced at CES in January. I wouldn’t use it as my main display, but it would be very tempting to use as a secondary screen or wall-mounted as a jack-of-all-trades display/TV in my home office.

This would also be ideal in a small office huddle room. AirPlay your presentations to it, or video conference from it.

I had a 19" NEC “MultiSync” monitor. It was great. I used to drive it at some ridiculous (for the time) resolution. I could drive it higher but couldn’t really make out the content.

I had a friend who had the 21" NEC MultiSync that was even bigger, heavier, and more ungainly than my 19". But he was definitely the cool guy when we got a crowd together for a video game night.

The reason I went with the Studio Display is I wanted 5K, mainly because, according to Renee Ritchie, MacOS prefers 5K because of the way it handles pixels. I’ve used 4K monitors for years at work, and this is much better for my eyes than 4K monitors. I wish it was 32 inches, but then I don’t think I would want to spend the money for that anyway.

The reason I went with the Studio Display is I wanted 5K … I’ve used 4K monitors for years at work, and this is much better for my eyes than 4K monitors.

It really depends a lot on the combination of display size, resolution, and viewing distance. My 24-inch LG 4K Ultrafine display, as sold by Apple, is a joy to look at, with sharp text at any distance I’m likely to sit from it. I use it set to what Apple calls its default setting of 1920 by 1080, which is pixel-doubled from its native 3840 by 2160.