Save Pocket Article to PDF to Devonthink

I am trying to fix this on Zapier, it’s either broken or I think I edited something that screwed it all up and can’t find what I did.

I have one in IFTTT (based on this blog post but I updated the PDF service), but I am not thrilled with it, because it’s not a normal looking PDF. Extremely wide margins and the ugly bar on the bottom.

Convert a favorited #Pocket article to #PDF and save it to #Dropbox using http://pdfmyurl.com?url={{Url}} 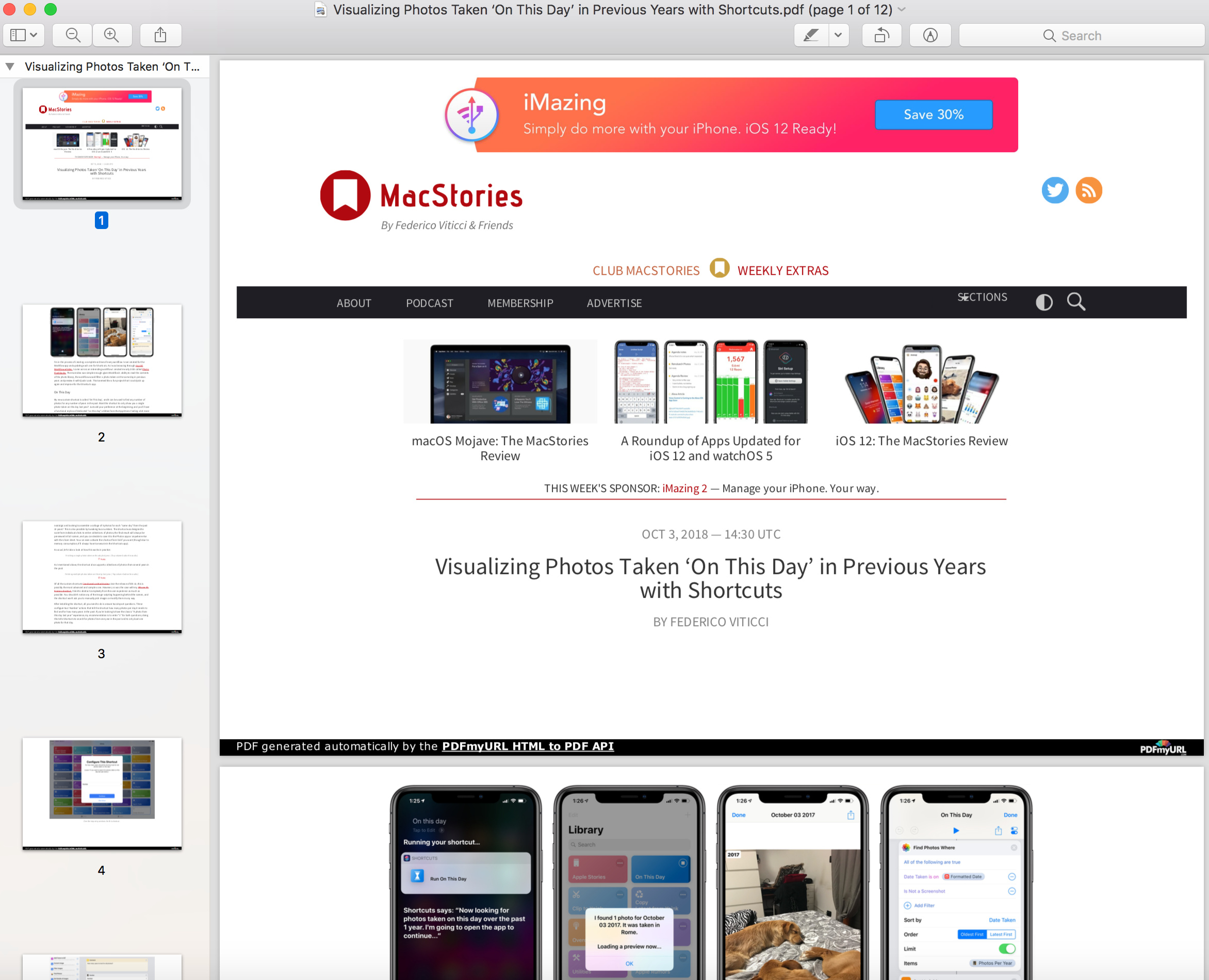 Looks pretty ugly and I am not sure why IFTTT is not using the “simplified pocket version” that removes everything and leaves it in article form.

When I became a paying Pocket subscriber a few years back, premium members got access to the Mac Pocket app, from which one can save articles to pdf. That’s what I do. 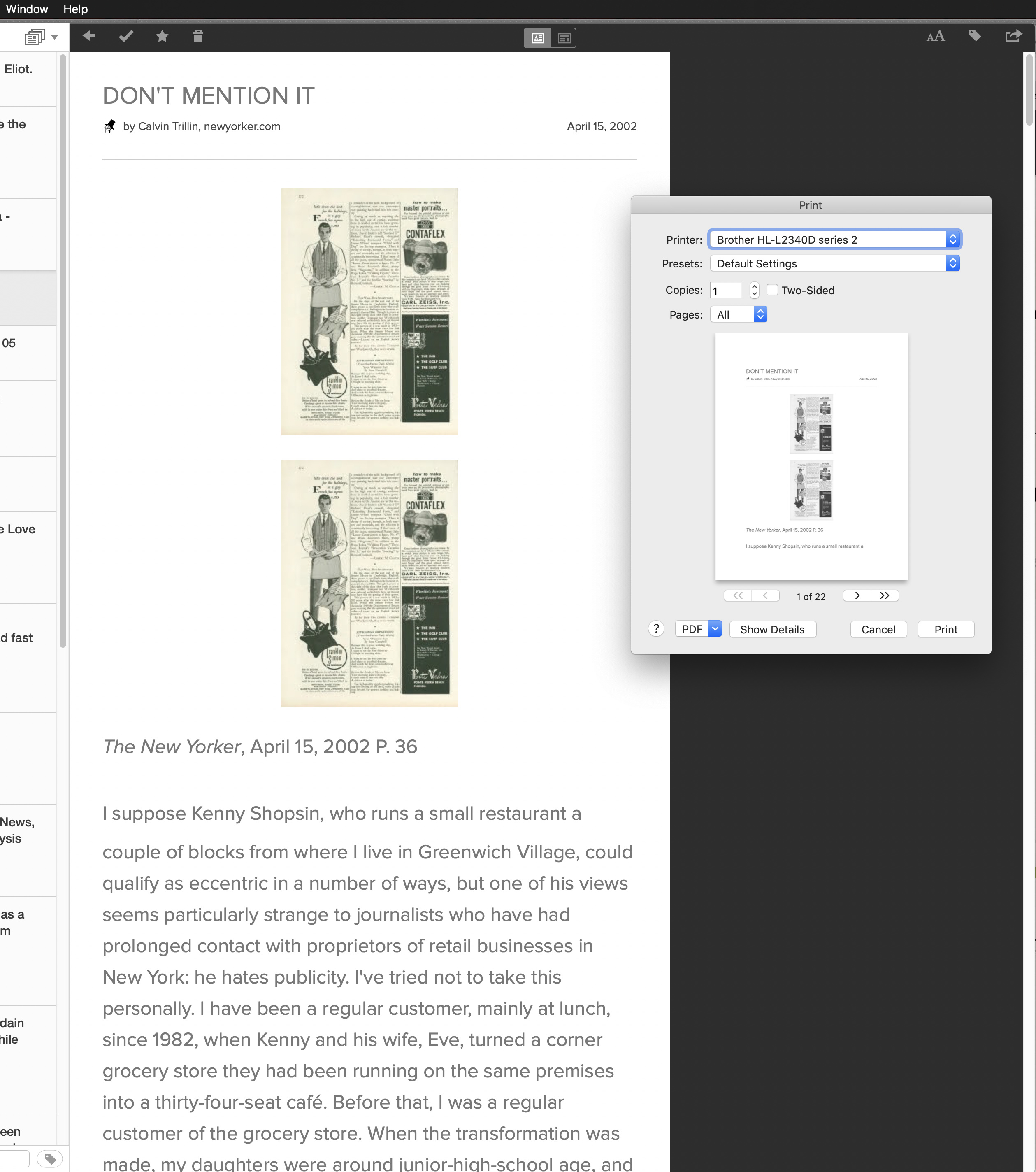 I’ve been a subscriber for a few years so it might be possible that these days free users also have access to the Mac app; not sure, but I see it’s on the Mac App Store.

So this works and I am free user.
I just need a way to automate it so that I am not doing all this manually.

Mm. I’m not hugely into automation, and I don’t know how many articles you save at a time, but the conversion of files to pdf into a specified folder (followed by deletion from Pocket/Mac) could probably be whipped up easily in something like Keyboard Maestro, then they could just be dragged into DTP. With KM you could actually have it select/save/delete until your saved item list is empty.

Maybe KM can save into Devonthink Sorter?!

I’m sure people more into automation can think of a better workflow.

Does Pocket give you a feed of your Favorited items?
My current setup is as follows:

I use Feedbin and when I star an article, Zapier creates a text file in Dropbox with the URL in the body then Hazel picks up that file and runs an AppleScript which uses DEVONthink’s Abbyy Finereader to create a PDF in my DEVONthink Global Inbox. The text file is then deleted and is ready for the next starred item.

If you are trying to move away from Zapier or IFTTT like service, I also have a Shortcut (workflow) that gets the clipboard, and creates a text file in the Shortcuts iCloud folder which Hazel picks up and follows the process above. I also have ones for Safari Web pages that does the same thing.

I use this for creating PDFs, web archives, and bookmarks within DEVONthink. Let me know if any of these might be of interest to you.

Speaking as a subscriber, Pocket doesn’t give me a ‘feed’ of the favorites items, it actually downloads/syncs all saved/faved articles to the app in the Mac. (And if I delete it somewhere it will be deleted everywhere.) That’s one reason I switched years ago from Instapaper - because if an article gets removed from a site or goes behind a paywall you lose access to it in Instapaper, but Pocket archives it (at least that used to be for subscribers only).