I’m seeing a lot of talk of the Ultra having a 49mm case compared to the existing 45mm size.

The case looks bulkier… does anyone know the screen size difference?

There’s a pixel comparison in the compare tool: 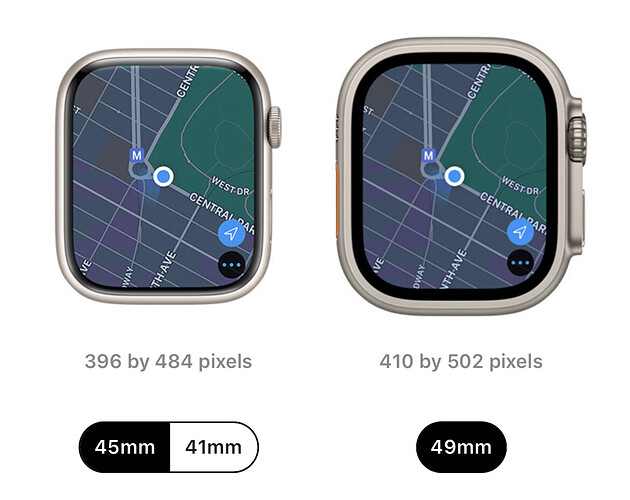 Thanks - I was hoping for a mm comparison.

Even with this comparison, would it be fair to say they are, in a practical sense, essentially the same size? Seems like the majority of the difference is a bulky case rather than more screen.

They definitely are close. There’s a square mm comparison further down the page confirming it. 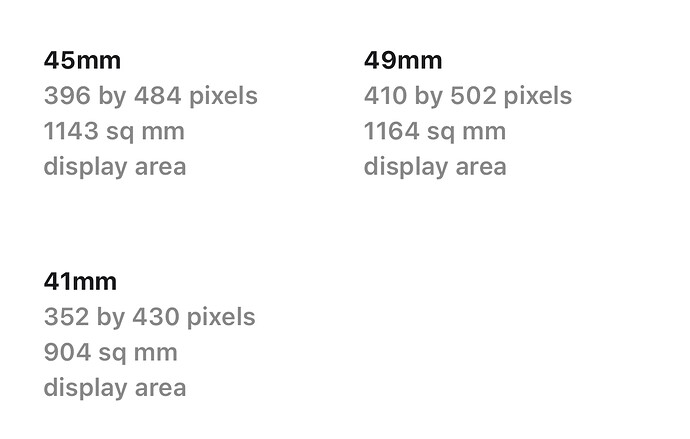 I had the first AW, and changed then on a series 4, and those two millimeter difference between 42mm and 44mm was one of the main reasons for me to buy the watch, as the display got a size I also could use without hitting continuously the wrong buttons.

If I compare the pictures above, it seems that the differences aren’t that big between 45mm and 49mm.
As the mentioned sizes are named after the case, and not the display, and with a look at the much thicker frame of the 49mm version, and the (optical) wider black frame around the display, I think the customer should not expect that much more display with the larger version, as it could/should have been.

If the screen size doesn’t lead to extra features it’s probably not useful. Compare with the S7 that had a keyboard that had not been seen on smaller devices.

Gosh, that border on the 49 mm sticks out like a sore thumb in this comparison

I’m not a fan of the design of the Ultra, but I think some of the answers here are wrong. The larger display is to allow for more complications (up to 8) on the watch case, which is apparently something that extreme sports people want. So it’s not just “everything a little bigger” but it give some functional advantage, I guess.

If you have a look at the picture with the comparison, the difference between the two displays are almost invisible. You can see that at the letters on the displayed street names at the edges of the displays.
I can’t see how they would bring more complications onto that more or less similar display, if they, at the same time, keep the complications on both watches at the same size?

My AW Series 4 has roughly 140mm circumference of the visible display, and is based on 44mm.
I would assume, that the circumference of a Series8 will be the same, or even larger.
If you break down the additional 21sq mm, mentioned above, down on that 140mm, you will get only 0,15mm on each side of the Display, and this is rather nothing, then a big advantage, from my side of the view.

I’m not defending the Ultra! I think it’s ugly AF and I’m not into extreme sports. I’m personally sad that the Watch is abandoning the fashion-and-looks approach that Ive wanted for it at first.

That said, MacRumors for one claims that the larger display enables a specific watch face with more complications that is not going to be available on the other watches. I can’t verify this but if Apple feature-marketing of the past is any indication, this is precisely what they’ll do. 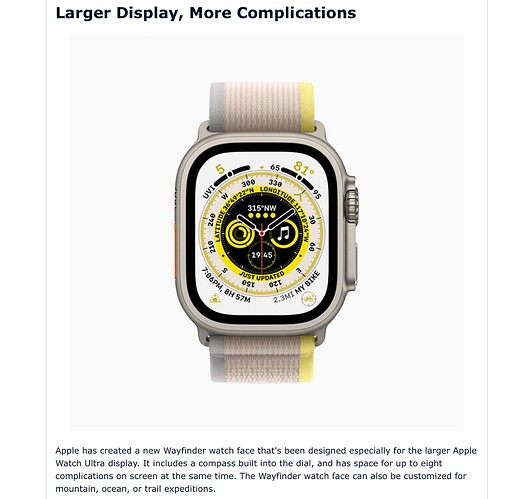 … in fact, Apple’s own press release says the same thing: 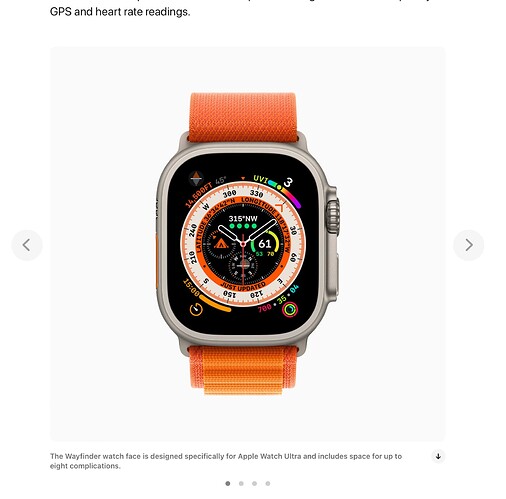 that the larger display enables a specific watch face with more complications that is not going to be available on the other watches.

I just think, that it is more a software (and therefore a marketing!) reason, this complication will not be available on the other watches, instead of the hardware related size of the Ultra.

You remember right–I know they highlighted an extra line of data in the workout app, and there are probably other spots. It’ll also affect what third party apps do. They did something similar when moving from 38/44mm to 41/45mm. In that case the number of pixels gained was more significant, but at the watch’s size, display increments that would be unnoticeable on a phone make a significant difference in usability. Even if new information isn’t added, 5% larger tap targets makes a difference.