Screenflow 8 was released today. You can get it on the macOS app store or from the main site.

If you are using this or something similar, what are you using it for? School, work, kicks and giggles?

Just as a sideline, I purchased it just now on the Mac App Store in Canada for $59 CAD, which is a hell of a deal. Two days only apparently–get it while it’s hot.

I purchased the upgrade. I create screencasts for Mac Users Groups and on my YouTube channel. youtube.com/nathanlott

I have tried Screenflow several times, but I have to admit I prefer Camtasia.
I create screencast for work. Actually use it to make some animations for projects too.
And then I use it for technical tutorials for my YouTube channel.

@Mrlund Curious as to why the preference?
Could it be due to you being mored ‘used to’ Camtasia?

I was using the previous version of Camtasia, but having heard such good things about Screenflow, took the plunge with the MAS discount.

I haven’t had the need to use Camtasia in ages, so would have had to revisit its features in any event.
So when the time comes, will use Screenflow instead – so will probably not have much of a ‘memory’ against which to compare it.

I upgraded from ScreenFlow 7 yesterday after spending about an hour with the ScreenFlow 8 trial version. I create a lot of screencasts, so it was a no brainer for me.

I also ended up subscribing to the Stock Media Library. I figured I’d try it out for a year and see how much I use it. It was only $45 USD for the first year ($15 off as part of the upgrade), which is a great deal.

So with this Stock Media Library, it’s ok to use the stuff you get access to for work stuff, even things you publish on your website? And what happens if you drop your Subscription at some point? The stuff you already created using some of it is still ok to distribute or edit?

I was really tempted to get the subscription to the Stock Media Library. I even had it in my cart when I stopped myself because I don’t know what my usage would be like in the coming year.

I’m really at the novice stage…

I assume that it’s ok to continue to use previously downloaded media, even if the subscription has ended. I emailed Telestream to verify this assumption and will report back once I have the official word.

Here’s the response I received from Telestream about the Stock Media Library:

The content made accessible via subscription to the Stock Media Library add on is only to be used within ScreenFlow. It may not be used on other software.

If you choose not to renew your subscription, you are still able to use the same media in future ScreenFlow projects, however you will need to add them to your global library in order to use them in additional projects. You will not be able to download the content again without an active Stock Media Library subscription. Here is a link to the Stock Media EULA for more info: https://www.telestream.net/purchase/StockMediaLibraryEULA.html

Thank you for doing that!

Awesome! Thanks! I’ll have a look at that then.

If there’s a bunch of useful content it might be well worth it for the price even if I don’t use a lot. The alternative would easily be hours of work trying to create and/or track down and pay for specific pieces somewhere else.

@BradG I did use Screenflow back in the days of Leopard, but when it became time to buy a new one. I found a discount on Camtasia 2, and I found it to be, in my opinion, much easier to use. It fit my workflows much better.

When Camtasia 3 came out I actually took another look at Screenflow, but found tons of bugs (Primarily with transitions), and several of the features I had been using in Camtasia wasn’t in Screenflow (Device frame, to name one). And the way you work in Screenflow just didn’t feel as intuitive to me, as Camtasia did. So I stayed with it.

. First let me describe my use case I plan to create youtube videos of app reviews- so my screencasting will be primarly iphone/Ipad not the MacOS desktop. 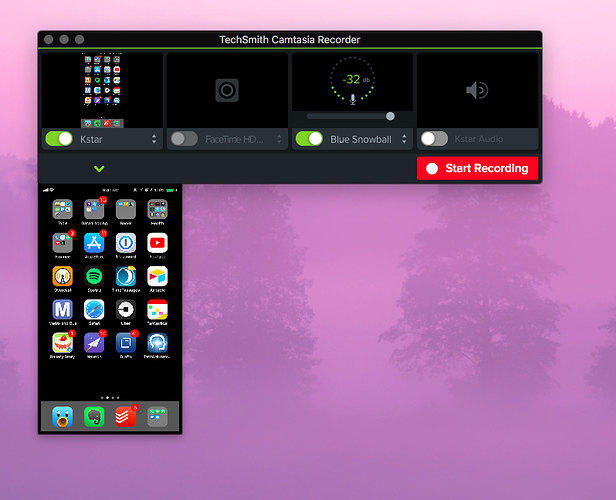 I am not pleased with Camtasia - I’ve lost many recordings bc of crashing which I found out last night is a known bug https://support.techsmith.com/hc/en-us/articles/218134177-Camtasia-Mac-Cannot-stop-iOS-device-recording-or-it-crashes-hangs not fixed and the workaround is to use QuickTime - NOOO i don’t want a grainy QT video hence me buying professional video software

anyway i’m 4 days away from 30 day return i’m most likely going to return this product as I can’t trust it.

My question is screenflow 8 stable for those who create IOS/mobile phone screencasts?

please advise hoping someone has a work around

Screenflow does not show the iPad/iPhone screen while you are recording. You only see it in the timeline when you are editing. That took me a while to get used to, but I did get used to it. If you have to see the screen while you are recording, one workaround would be to airplay the device to your Mac using Reflector 3 by AirSquirrels. http://www.airsquirrels.com/reflector/try/