I am curious if anyone can provide feedback on Setapp.

I use a numbers of apps available in Setapp (Ulysses, iMazing! etc) so I was considering it as a potential money saving option, since I have alread6naoidnfor a year of Ulysses and paid for the latest version of iMazing, and so forth, there is no immediacy to the decision, but if Setapp really delivers in the latest versions of every supplied app, is reliable, etc, I might as well make the switch.

I subscribed to Setapp last September, and will definitely be renewing for another year. The existing catalog contains some of my favourite apps (including Ulysses) and I’ve discovered some other gems in the process.

What I didn’t like, was how deeply it integrated in my system: There’s Setapp in the menu bar, Setapp in the dock, Setapp in the sidebar of your Finder windows, Setapp here, there and everywhere, acting like controlling everything and offering lots of apps that I actually didn’t need or want.

@maennig — You can easily hide the dock and menubar items in the Setapp Preferences. I think it makes sense that Setapp apps live in a “Setapp” folder within the Applications folder. Among other things, it makes it easy to keep track of what Setapp apps you’re using.

I doubt that there’s anyone who uses all (or even most) of the apps, though I find that there are more than enough that are genuinely useful for my day-to-day work to justify the subscription fee. Your mileage may vary. 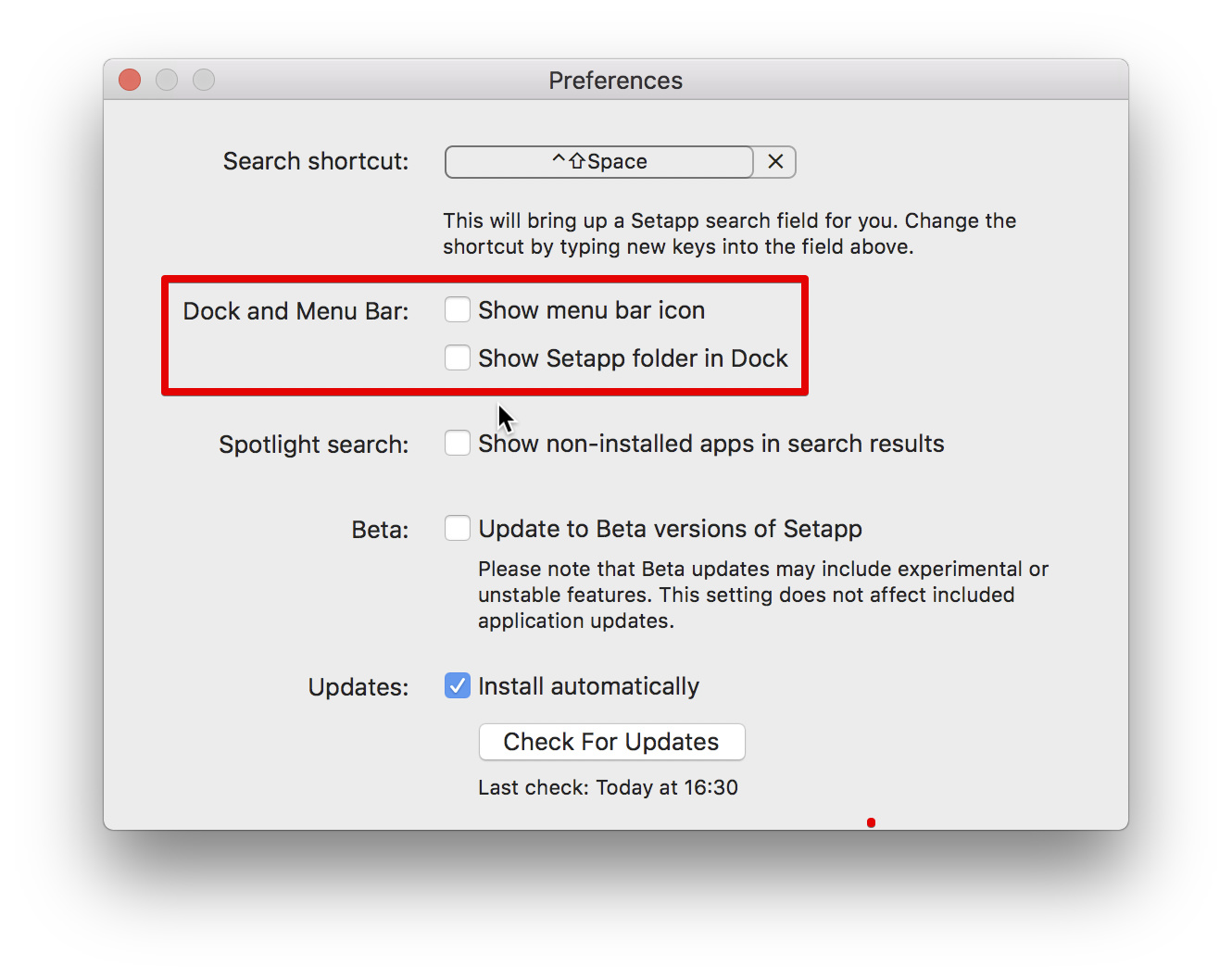 I love Setapp! When I first started to hear about it on podcasts I was pretty skeptical. I am not a big fan of subscriptions and generally prefer one time payments. But as a new Mac user I was also intrigued by the buffet of great apps available to try. I finally bit the bullet and subscribed when they introduced the education pricing. As a teacher I was eligible for a significant discount. I use several of the service’s apps quite regularly. There is no way I would have paid for each of them individually in my 13 or so months as a Mac user. I just checked my Setapp folder and I have 20 apps installed on my MacBook right now. To be fair, several are apps I downloaded and haven’t used much. But on the other hand some of my most used apps are in that list. Things like Bartender, Better Touch Tool, BusyCal, Downie, MoneyWiz, Permute, and iStats Menu. I eagerly look forward to the notification that a new app is available on Setapp so that I can check it out! I can’t imagine that I won’t subscribe again when my year is up. However, I will admit that I would probably be less enthusiastic about the service if I was paying full price. I really do hope that enough others join the party though-I would really be sad to see Setapp disappear!

I use Setapp from the start. I like that it grew its catalog significantly, offering apps that I probably would not bought as standalone but I really like to use, like Boom 2. Another aspect I like is that whenever I have some one off app need, I don’t have to search which app is good for that purpose, most likely than not a good altrnative is already in the Setapp waiting for me.

I’m also a fan of Setapp. If you use Ulysses that’s basically half the subscription right there and you get a whole bunch of other apps as well. As someone who lives in somewhat poorer country, I find that it’s actually good value for money. I use Setapp apps all day: Bartender, Focus, BusyCal, and many more.

I believe that’s even the default now, might be mistaken, as I keep my dock to only the apps open (nothing pinned)

It’s a way of speach, saying “you” instead of “it is possible to”, it’s retoriks

Thanks for the clarification. There’s some info here that may be helpful. Ironically, you may need to install Setapp app to completely uninstall everything it installs. Alternatively, their support team may be able to provide a comprehensive list of everything that gets installed when you install Setapp.

I’ve looked at it plenty of times, only to realise I already own a significant portion ‘their’ apps already.

That said, can someone kindly explain how the subscription service world work, where I am currently already paying an annual/monthly fee for apps that I own (I.e TextExpander)? How does my subscription ‘transfer’ when I jump over to Setapp?

It doesn’t you have to download the Setapp version of the app, as they have their own DRM system, so it’s kind of a hassle to Switch to Setapp, if you already are subscribed to the other services. I know Ulysses allows importing from other installs, so that’s a way to “transfer” over.

With that said, Ulysses is half the cost in itself, and that’s how I justify for paying for setapp, also there’s a few other apps, I can’t live without now!

I gave it a go, but discovered (perhaps like others did) that I either already “owned” many of the available apps or I have built up so many of my own personal work habits using Apple native apps that keeping SetApp seemed a bit like overkill.

I like the SetApp model and will keep an eye on it for future as their roster of apps is increased.

I honestly think Setapp pays for itself. I use a few of the apps like Bartender and BTT so I’m saving on those.

I love testing apps and playing around with different apps so I think it is well worth the money.