Setapp just updated to 3.16, and the release notes claim it now includes Craft. However, there’s no sign of Craft in the Setapp client.

Is it showing up for anyone else? 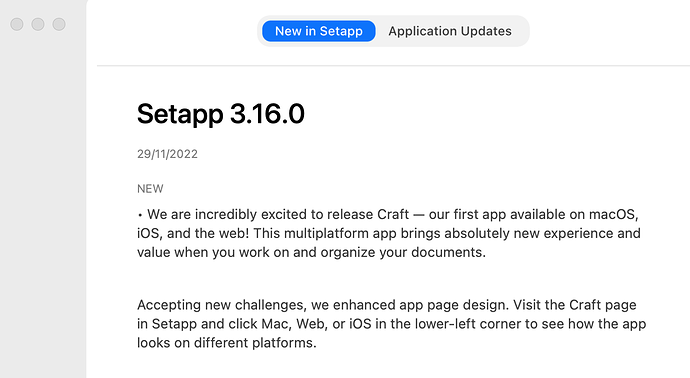 Updated Setapp and searched for Craft, but it didn’t appear. I checked the What’s New note, and I saw the same one you posted.

Saw that Soulver 3 is there, too, after purchasing it the other day. Anyway, I will install the Setapp version to provide extra revenue to the dev.

Craft would be a huge addition to Setapp (if the release notes are accurate). 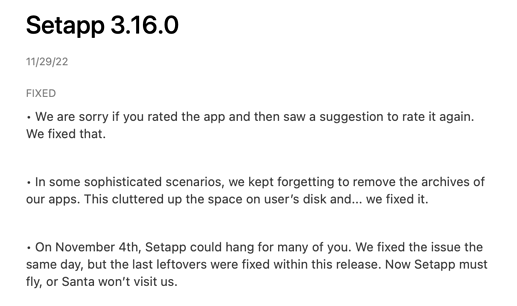 I’ve posted the same question on the Craft Slack, and just received this reply from their customer support.

Well this is a pleasant surprise. I’ve been looking to drop subscriptions and now I’ll be able to drop Notion.

Hmm! This would certainly increase the value of a Setapp subscription to the point that it’s really worth it. If they can keep including more subscription apps, it becomes absolutely a no brainer. I’d be using Ulysses instead of iA Writer if it weren’t for the Ulysses subscription. However, if I can get Craft + Ulysses + everything else for slightly more than my current Craft subscription, I’d be all over Ulysses.

Hell, if they keep adding more subscriptions in to the Setapp bundle, I’d even tolerate paying more for Setapp over time.

Between MindNode, CleanMyMac, BusyCal, Canary, and now Craft I feel like I’m getting my moneys worth. Especially since many of those apps are for iOS as well.

And if I don’t want to use an Apple default app I specifically look for an alternative on SetApp, to make sure I get my moneys worth.

I was so wrong about SetApp and bought lifetime licenses. Seems SetApp is the way to go for future.

I wonder if Craft is the first VC-backed app on Setapp?

All the other Setapp apps are (I think?) made by indie firms, and many are developed by a single person.

It would certainly be one of the first; I signed up yesterday for the first time in a couple years based on the Craft news, and also noticed Curio there, which has raised some funding.

Curio is an interesting addition because it is more of a service and, presumably, has a real cost associated with delivering the service in the from of professional narration, at least until AI takes over.

Next step: Audible on Setapp!

All the other Setapp apps are (I think?) made by indie firms, and many are developed by a single person.

Certainly this has been a big motivator for developers - the ability to get exposure/revenue that would be impossible to achieve simply by being somewhere on the App store or a website. This particularly appeals to developers with little marketing budget - someone else does the marketing while you do the development.

< purespeculation >Could it be that Craft haven’t been able to get much traction outside of power users so far? Certainly, if it wasn’t for MPU I’m sure I wouldn’t be aware of it. < /purespeculation >

I have the pro version of craft, but I am also a subscriber to setapp, which version is included in the setapp subscription? anybody else in the same boat?

On the iOS app it says Pro.

oh wow! I get Setapp and have been wanting to get Craft! hope it is worked out soon.

how much is a lifetime membership? I love them.

I’d like to know that too; can’t find it on the site.