I have an existing relationship with Backblaze, both for backing up a computer with quite a bit of attached storage and for business server backups.

I could always do a Backblaze setup, but I’m thinking Arq may be a better deal (money-wise) with better versioning capabilities. And I could use Arq as a second option on the existing Backblaze computer as well, just for another copy of the most critical data.

Is Arq still considered to be one of the best “pay for your software, then pay separately for the storage” sorts of backup programs? Or are there other options I should be looking at?

I am a fan of ARQ for offsite and local backups - one main reason is that you can encrypt the files/folders before they get to the destination.

Can you do this kind of encryption with Backblaze?

Can you do this kind of encryption with Backblaze?

Yup. It’s built in - you just need to set an encryption key.

The standard Backblaze unlimited for $7/month program is a good deal - for people who never need to recover a file that has been lost for more than 1 year. If you need that ability the price goes up to $9/month + $.005/GB/Month for versions deleted more than 1 year.

For the same $7/month I get 1TB of storage on Backblaze B2 with “Forever” version recover via Arq. And since I’m backing up less than 1TB my bill is less than $7.

In your case you may want to look at Arq Premium was well as B2.

With Backblaze's Version History feature you can easily access previous versions of your files. Click to learn more.

agreed. Simply from a cost perspect, small volume back up is more effective with BackBlaze B2 as it is only $0.005/GB but if you have usb drive connected it may be worthwhile to have BackBlaze personal backup as it is a fixed cost not matter how much back up you do.

Agreed. I am a big fan of Arq which I have been using since around version 2. I am ALSO a big BackBlaze fan. Actually, I have both running on my MBPro, because I am also a fan of redundancy so I don’t lose any data.

If I wanted one offsite backup for a small amount of data as you do, I would probably go with Arq (which is easier for me to say as I bought a lifetime license years ago). I would store the data in B2, Wasabi, Amazon S3, or maybe Glacier Deep Storage if it was something that I knew I would rarely need to access and would not need back quickly (eg <12 hours), based on cost.

If you are looking for truly set and forget, either go with BackBlaze or Arq Premium. You can pay extra for longer storage via BackBlaze, but when you start doing that, the benefit of fixed price for unlimited storage is reduced.

If you have a huge amount of data on one computer (internal or direct attached drives) then BackBlaze can quickly become the most cost-effective.

One of my problems with BackBlaze is that you are at risk for unexpected data loss. Here’s how. When you delete a file from your computer, BackBlaze will also delete it after 30 days if you do not subscribe to the longer retention options of 1 year or forever which are additional pricing tiers. So, if you accidentally delete data without realizing it, 30 days later it is gone from BackBlaze. Six months later when you realize you lost that data, you are out of luck. I had this happen some time ago. I discovered a large chunk of rarely accessed data gone from my system. Presumably I accidentally deleted it and did not realize what I was doing. Fortunately, my backup was Arq into Glacier and while I did have to wait a few hours, I brought it all back. Worth the cost of storage!

BackBlaze is not my primary backup destination, it’s my island of refuge if something really bad happens. To date I haven’t had to restore files from BackBlaze but I have needed my local,backups. I’ve only restored from BackBlaze during disaster recovery test. I do pay for their extended versioning.

One of my objections to Arq is that it’s difficult to access your files without using the app. Since I use CCC for most of my local backups I can access the files with just Finder.

@glenthompson: Agreed. You really cannot access your Arq backups without using the app, so there is a bit of “lock in” there.

Of note, however, the developer does may available an open-source tool for retrieving data from Arq archives. This addresses, to whatever extent you feel comfortable with this approach, the concern that the app may one day disappear leaving users without access to their backups.

I have looked at the repository on github, but I have never tested out the open source tool.

Isn’t that basically true of Backblaze as well? Or are you counting the web-based restore as a useful option?

This is a really interesting topic. I have Backblaze on my MacBook Pro but since March 2020 I have been working from home so use my iMac. I use CCC and Time Machine to do a local backup of my iMac and most of the important work stuff is in iCloud anyway.

I still have my pictures and music on my MacBook Pro so those are backed up to Backblaze.

Ideally, I would want a cheap family Backblaze subscription which would allow me to back up about 5 machines (both of mine, my wifes Macbook and my daughters Macbook).

Now I am thinking that maybe I should buy the Arq Family licence and use our existing Office365 1TB each storage for backup.

Looking at my Backblaze backup, I dont think I would hit 1TB across all of the devices so might be worth even going for the Arq Premium.

If you have multiple machines, I would consider using idrive. Check out the writeup at wirecutter 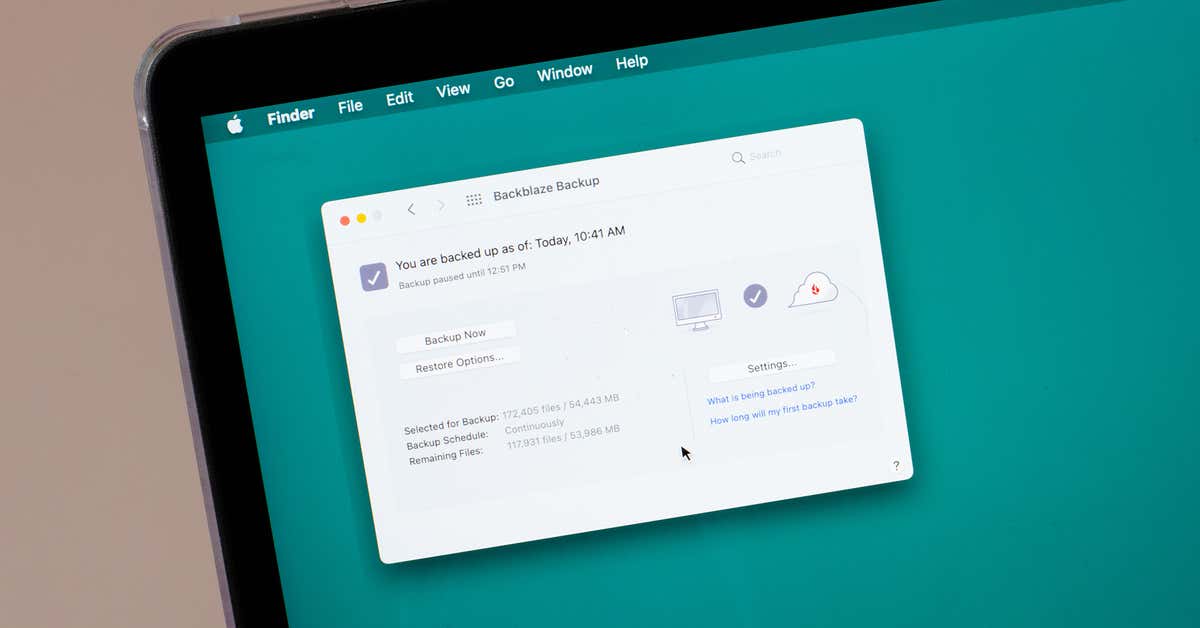 We investigated dozens of popular online backup tools to find the best option for most people.

OK - cool that is good to know.

Isn’t that basically true of Backblaze as well? Or are you counting the web-based restore as a useful option?

Both web interface and a hard drive requested from them. So far all my testing has been using the web-interface to verify that I can recover files.

Ideally, I would want a cheap family Backblaze subscription which would allow me to back up about 5 machines (both of mine, my wifes Macbook and my daughters Macbook).

You could attach a large hard drive to your iMac and have all the other computers clone their contents to that drive with CCC (with Safety Net on) or similar. Then get a BackBlaze subscription for that iMac. That gives them a local backup from CCC and an offsite copy with BackBlaze.

I did that with an old Mac Mini with 2 8tb drives attached. One is the media repository for Plex along with archived files and the other houses CCC backups from 4 other computers. The media/archive drive has a local backup and both drives are backed up to BackBlaze.

This is intriguing, were the other computers backing up wirelessly to you iMac (we mainly have laptops in the house)? Can you share a bit more about the CCC configuration?

Combination of wired and wireless. The Mini is hardwired. I have the backup shared (via System Preferences->Sharing) with a folder for the CCC backups. Each computer then has its own folder like Glen iMac, Glen MacBook Air, and Mary iMac. The drive share is automatically mounted in the login options. CCC then has a scheduled job that performs the clone over night. Each computer’s backup runs at a different time. The once a day backup is sufficient as we have other continuous backups.

CCC’s safety net is their versioning tool. If a file has changed, the old file on the clone is moved and the new version is cloned.

Periodically I test my backups, both local and BackBlaze. For BackBlaze I just use the web interface and get a folder back and verify the files are ok. I haven’t tried their ship me a drive with everything service yet but it’s in my plans. Not only have I tested my local backups, I’ve had to use them in multiple situations. Had one OS X upgrade go bad and my bootable CCC backup saved the day. Same thing when the GPU on my 2011 MBP died.

CCC’s safety net is their versioning tool. If a file has changed, the old file on the clone is moved and the new version is cloned.

My understanding is the Safety Net feature applies to files that you delete. With Safety Net turned on, if you delete a file that was already on your backup drive from an earlier backup session, Carbon Copy Cloner retains that file. And it retains that file until the Snapshot that references it is deleted. Deleted files will also be removed if you turn off Safety Net and run another backup on that disk drive.

Safety Net operates differently depending on the type of destination. The behavior you describe only applies to APFS destinations. In my case I’m backing up to a HFS+ volume on a SMB share so it operates in CCC’s legacy Safety Net mode. Like Time Machine, old backups only get deleted when space is needed. With less than 3tb total backed up to an 8tb drive I’m not too worried about old stuff getting purged.

You are correct. My current set of five external backup drives that I rotate through are all APFS. I’ve left the legacy disk format behind.

(Except, I assume, for the disk in my Time Capsule, which is on the verge of being declared unreliable.)