Some perspective on prices

I went down a research rabbit hole today, and thought people here might find the information I found interesting.

The chart below reflects education pricing for the M2 Air. I think the ThinkPad 350 is the first computer I ever bought for myself when I was in grad school. In any case, the date, specs, and price are about what I remember.

For the dollar conversions, I used the inflation calculator on the Minneapolis Federal Reserve’s site. 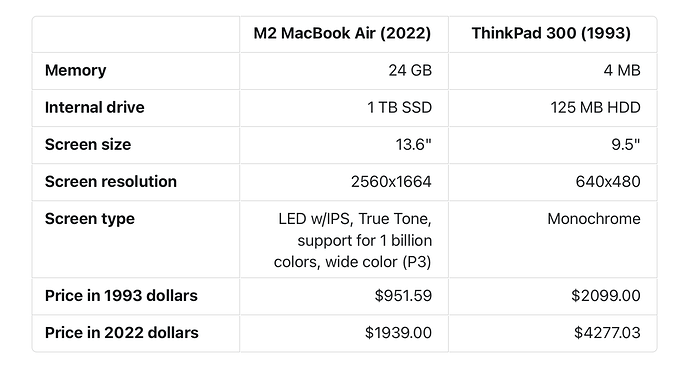 Perhaps the M2 Air isn’t as expensive as I thought.

Not that I’ll be buying one, as I still love my M1 Air.

That’s fascinating. I wonder if the same would be true if you compared an 1993 automobile with a modern one.

No idea if the Tesla Y is analogous to the '93 Town Car – maybe the high-end Model S is better? It’s $105,000; I’m not really a car person – but the same principle probably holds. And no doubt the features on any modern car blow a 1993 model out of the water…

I do wonder what the inflation-adjusted price for various Macs are over the years… surely someone has put that together?

That is interesting, yes.

I’ve always thought, and this has only been cemented through ownership, that Apple products are good value for money.
The problem lies in what you value, and if that aligns with what Apple values.
If you don’t value top of the range SSD and RAM speeds, precision machining, non-flexing bodies and hinges, tidy internals you’ll never see, well, paying Apple prices for the more ‘basic’ specs of processor speed and amount of RAM and SSD is not so good value-wise.

I believe though the Apple Silicon Airs are arguably the best value computers ever built, but upgrading from M1 to M2 is unnecessary unless there are specific needs.

(A fuller perspective would include comparisons from other brands, though.)

(A fuller perspective would include comparisons from other brands, though.)

I was simply intrigued by the changes in price over time, comparing a computer I actually owned to the one I’d likely buy now if I needed a new one.

For the dollar conversions, I used the inflation calculator on the Minneapolis Federal Reserve’s site.

I do this sort of thing all the time to make a point to family members. Apparently the money I earn is “way more than your father ever did.” Uh huh, in absolute terms it is, but inflation was rampant for a bit there between!" I do, in fact earn more even with inflation taken into account, but nowhere near is a big a difference as they think.

That’s fascinating. I wonder if the same would be true if you compared an 1993 automobile with a modern one.

I researched replacing my Mazda 3 that I bought 15 years ago. I got a pretty sweet deal then, but I know the list price was NZD$32,345 for the middle model. If I were to buy the middle model Mazda 3 today (and they haven’t grown over the years unlike some manufacturers) it would be about $41,000. That’s pretty incredible when inflation alone should have made it $45,719.