I received my Studio Display (with height adjustment) this weekend and I seem to have some backlight bleed which I’m not really thrilled about. Its mostly consistent around all edges with the top two corners seeming the worst. I’m not sure whether this is normal or not so wonder what others experience is like. 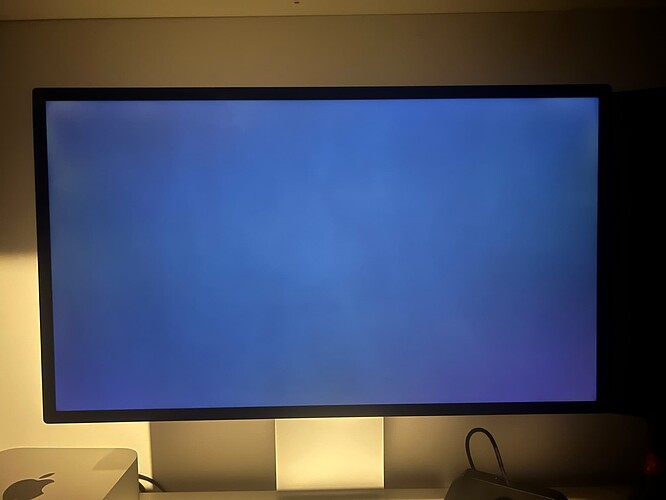 I feel like I can see the future with this complaint. They’ll happily exchange it for you, even several times, if you aren’t happy. But you might end up with an even worse one—and I’ve never seen an IPS without light bleed in all my years. It’s like a white whale. My suggestion would be to only pursue it if you are having uniformity issues beyond the least sympathetic background colors and ambient light possible.

Thanks for your input. I’m really just trying to gauge if this is what should be expected and from your response it sounds like this is a perfectly acceptable panel?

It’t not really noticeable in most normal use but when watching video etc the edges are noticeably lighter to my eye.

Yeah, I don’t actually have a Studio Display to compare. But I’ve seen enough IPS displays in general, been on my own quests for “just the right” uniformity or supplier, and if you showed me this image with no caption, I’d rate it as an above-average panel.

Thanks that’s helpful in giving me some perspective.

Mine also has some bleed. In actual use with various windows open it is completely unnoticeable.

I have one at home that I am waiting to pack up and return. Happy to try a dark background later and post a pic for comparison.

Would be good to see a comparison picture. Are you returning it because of the bleed or another reason?

FWIW, my Studio Display has almost the same amount of light bleed, particularly in the corners as shown in the photo posted by @Keith.

Hopefully this will make you feel better. Courtesy of a crappy LG 4K 27". Excuse the reflections, but they do not detract from its backlight problem.

It’s only 3.5 years old. It only cost 1/6th of a Studio Display, but I still didn’t expect it to do this. It started doing that about 2 years in, and I should have tried getting it replaced under NZ’s consumer guarantee law but it was also purchased from a crappy retailer and I haven’t had the energy to try it. 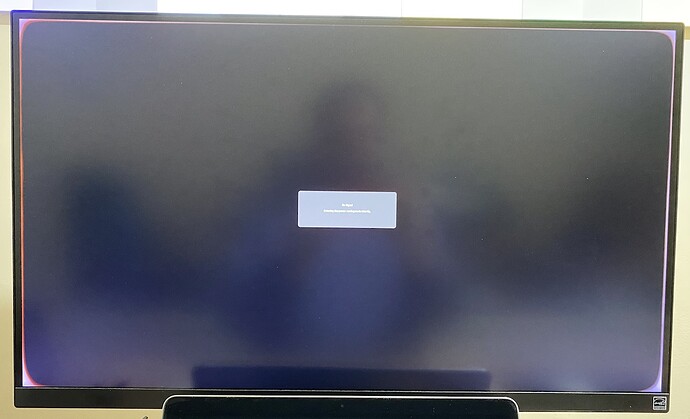 Yep that is bad!! - So glad my studio display is not this bad.

Thanks for confirming I’m not alone and probably somewhat normal.

Sorry, I haven’t forgotten but just been busy. In the meantime, to answer your question, I’m not returning it because of any light bleed but for the following reasons: 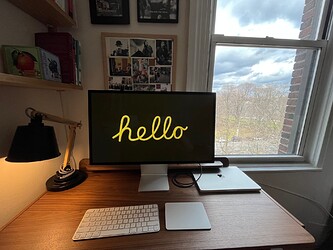 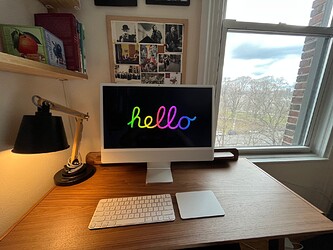 (PS - if you sense a little a bit of ‘trying-to-convince-myself-of-what-I’m-saying’ in the above, you’re not wrong.)

here. I took a few photos. In my case, if there is any backlight unevenness it appears to be mostly on the right side…? or bottom left corner perhaps? I don’t know, but I don’t notice it in real use scenarios.

Anyway, over at the macrumors forums (not a portal known for the sober, thoughtful opinions of its participants, I note) people are up in arms about apparent buzzing noises coming from their ASD units, specifically from the power supply, when they are on the same circuit as… something that I don’t understand because I don’t know a thing about electricity. It appears people who have ASD’s and air conditioners on the same beaker circuit are reporting funny buzzing sounds. I suspect it’s a nothing burger, but I used to say that about the butterfly keyboards too, and arguably I was wrong, so. 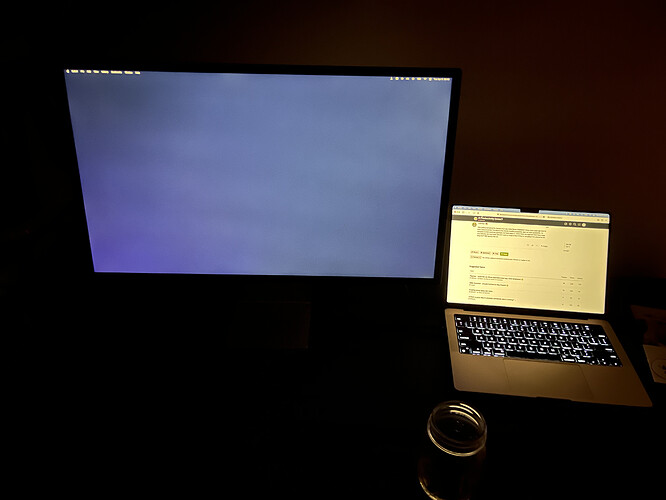 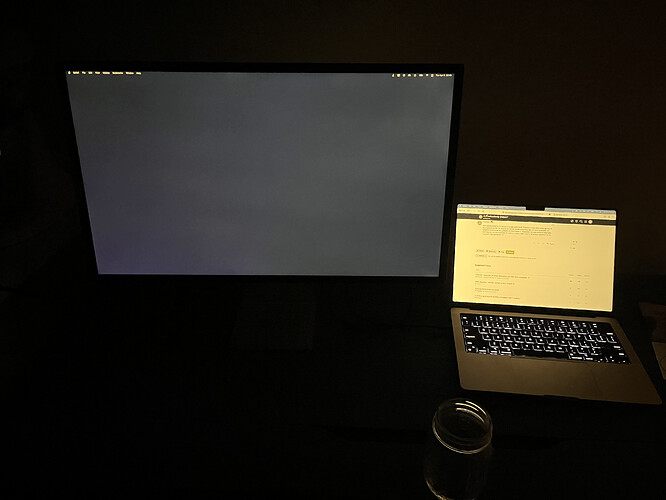 Backlight bleed is, I think, a normal side of effect of IPS displays with one backlight. It’s unavoidable, and one of the reasons some reviewers were sad this didn’t have zoned LEDs like the MBPs or XDR. I think everybody’s displays look normal, considering that reality (excluding the bad LG).

Are you saying my display is exceptional?

Thanks so much for taking the time to set back up and take some pictures. It seems I was worrying about nothing from yours and others reactions (over scrutinising is a problem of mine).

I think we all have our particular demands of our devices, its just a case of what makes you happy. I did look very briefly at the 24" iMac when it came out and though there’s aa lot to like about it, its just too small for me. Plus I wanted more power. Not that I probably needed it but I ‘wanted’ it.

I did have a real dilemma about choosing the studio itself (not the display) over a laptop but in reality I don’t have much use for a laptop, I’m almost 100% at my desk.

Thanks for your reassurance. I’m growing to really like my display (and the studio itself) but can never really get the XDR out of my head. I may yet be tempted to upgrade if/when they bring out a new version. But given the likely price its probably just a pipe dream.

I feel the same as you. I think it’ll be a while before we see a display like the XDR, but affordable. Display yields are hard! The 5K panel, as it is, is probably not terribly easy to manufacture with great yield quality.

hi great thread. got my asd today and its fantastic under normal use. Then i decided to do the the backlight test and its really bugging me now as i definitely have some problems with backlight bleed i think. (side note, apple is a victim of its own success, the display is so bright when maxed that i would seldom ever use it at full brightness, but when i turned it up for the test the bleed really shows up.)

question: in some forums they say the backlight bleed gets better with time… has anyone noticed this after a few weeks use? 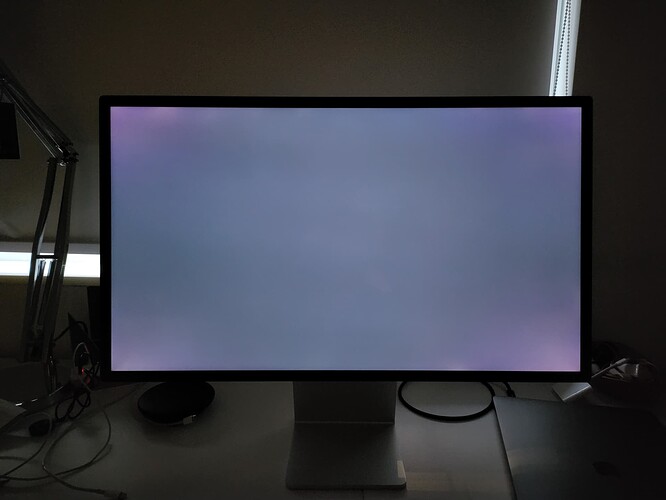