Hello there. I am on a 2015 Macbook Air with High Sierra and a 128 GB hard drive. I am about 20 GB from maxing out the drive space and I’d like to know where the big files and other space hogs are lurking. I already use Clean My Mac X to clear out old stuff but I cant seem to figure out what is taking up so much space!

Is there an app to identify the directories that are taking up lots of space on my HDD? I’m considering offloading some things to an SD card.

Thanks in advance folks.
-Steve M

DaisyDisk is popular, though I’m still using Disk Inventory X. I also like Gemini by MacPaw for finding duplicate files - that can really cut down on the amount of hard drive space being used up.

+1 for DaisyDisk. Very easy to see the large files and can queue them up for a mass delete as well.

+1 for OmniDiskSweeper. Been using it for years. I even paid for it back when it was non-free.

to run the app as super-user, so you can size literally every folder on your Mac. I found that my wife’s account, for example, had a bunch of old iPhone backups that hadn’t been used in years.

Obviously be super-careful with that. “With great power…” etc.

All good recommendations. A few years back I bought Space Gremlin after Macworld gave it 4.5 or 5 stars. It remains on the Mac App Store despite not having been updated in perhaps four years. I like the app, but I’d suggest using one of the others recommended above.

A good alternative is lurking at “About this Mac.”

Click there, then the “Storage” tab, and finally the “Manage…” button at the right. A window will populate with good info on specific files sizes in the pane at the left. 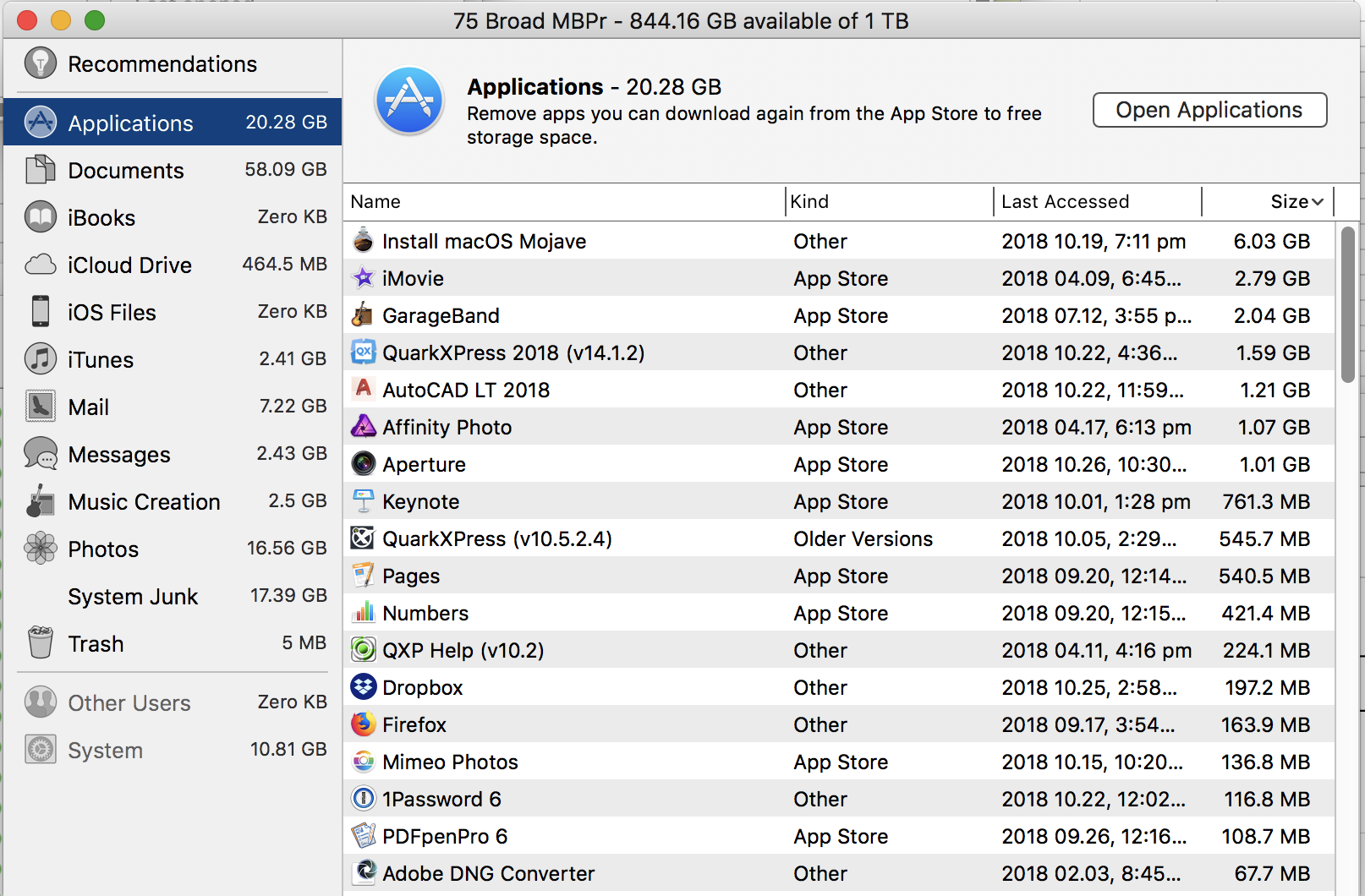 (Perhaps amusingly I see that the app using the most space is “Install macOS Mojave” … downloaded for my by Apple. Wish Apple wouldn’t do that.)

+1 for DaisyDisk. Clear, fast, and easy to use.

DaisyDisk for sure.
I’ve tried several others but I keep coming back to DaisyDisk

Thank you very much for the suggestions!

Turns out that Docker, and the Docker images I had downloaded, were the main culprit occupying about 15GB.

One thing I learned during this process was that Clean My Mac X, when scanning for “Large & Old Files” only reads the file attributes to determine size and age. The large .tgz archive files I had in Dropbox kept coming up in the scan even though they did not physically reside on my HDD (thanks to Dropbox Smart Sync). This was hampering my ability to identify the big files actually on my drive.

After deleting Dropbox (and shifting my workflow to rely primarily on the web app), Clean My Mac X works well to find big and or old files. DaisyDisk and OmniDiskSweeper do look pretty intriguing though, might give them a shot too.