I’m currently transitioning from Evernote to Apple notes and I’ve hit a potential roadblock. I was always copying note links and pasting them inside of other notes as a quick way to reference other notes. I’m struggling to find a similar approach for Apple notes.

Does anyone have suggestions on a workflow that would work in a similar way? Any help would be greatly appreciated!

This feature does not exist in Apple Notes, as far as I know. (Although you can Share a note with others, you aren’t given a link to the note as in Evernote.)

One app that does have this functionality is Bear: 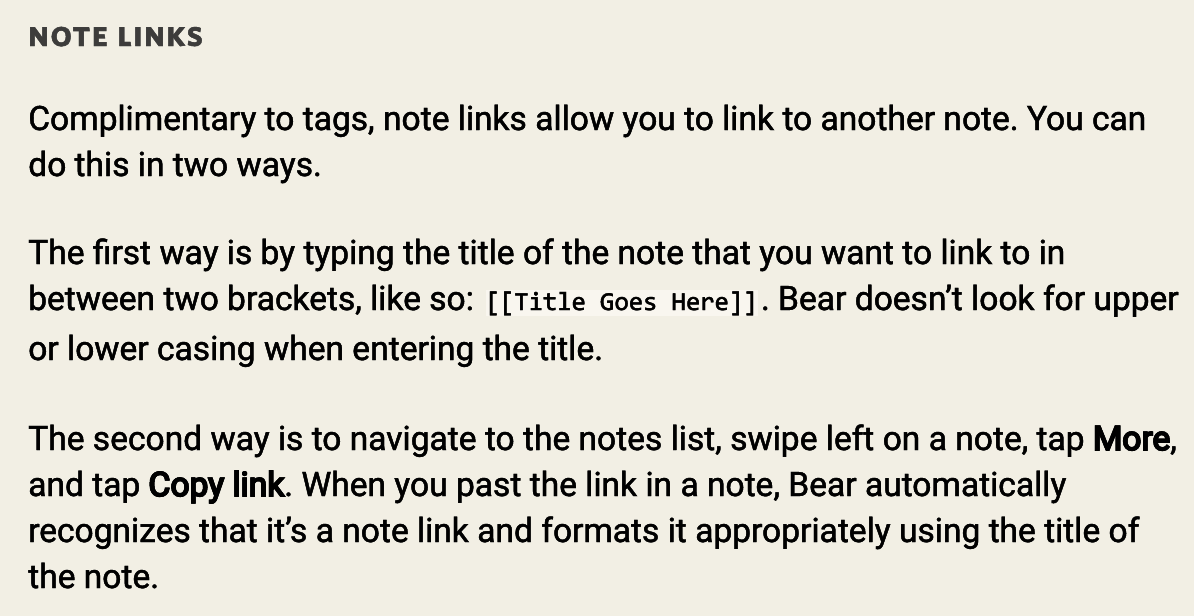 Actually, you can share a note with yourself to get the link: 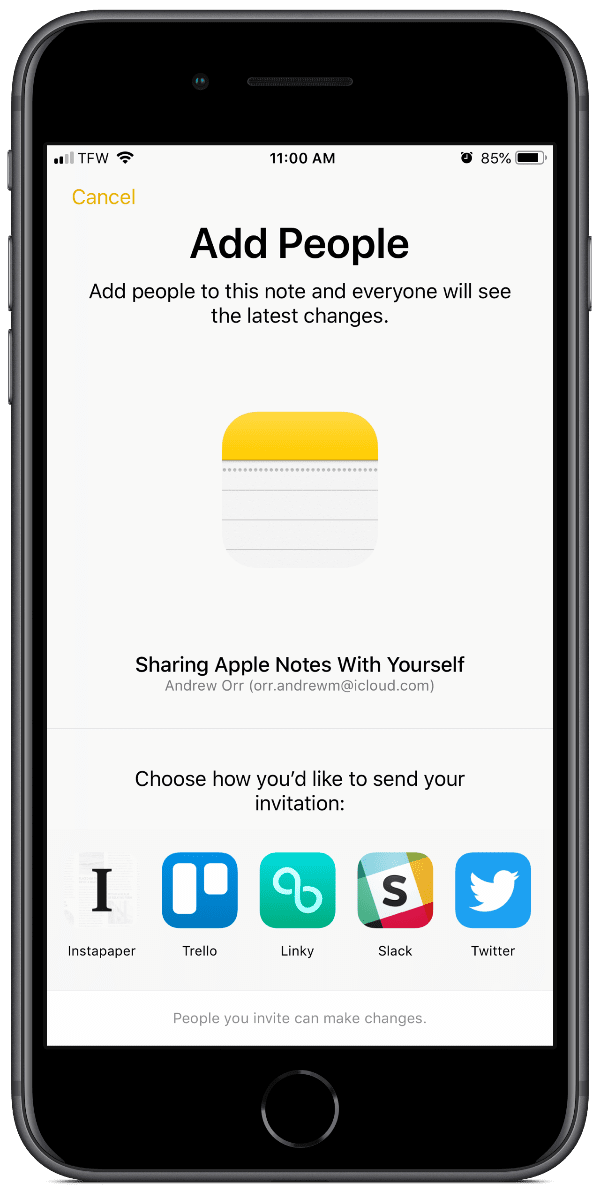 Apple Notes can be shared with one person, many persons, or even yourself. This gives you a handy interlinking system to build a note network.

Ah, nice hack! (Another reason not to pay for Bear.

That’s super helpful to know! Good find. Seems like something that Apple would introduce in the future, but who knows… Appreciate the help!

As a follow up question, do you think that Apple will continue to introduce new features with Apple Notes or do you think it will stay feature complete for the next several years before a new update? I’m going to invest some significant time into switching over and would hate to do this again a year from now because of lack of focus from Apple.

As with all things Apple, it’s impossible to say. My own personal guess is that Notes will not receive any major new functionality any time soon.

When you look at other stock that haven’t advanced much in years, like Calendar and Mail, it’s fairly surprising that Notes became as good as it had and got the features it did in its last major revision.

It’s a great stock app. But I would not count on Apple’s making it more competitive with 3rd-party pay apps (for which they get a commission).

But I would not count on Apple’s making it more competitive with 3rd-party pay apps (for which they get a commission).

I agree with the sentiment, but I don’t think Apple’s 30% app store cut has anything to do with it. What percentage of users ever buy a notes app from an indie developer? If a better stock experience would get them just one more hardware sale, how many app store sales would it take to make up that profit margin?

Fundamentally, I think this is a problem of limited resources on Apple’s part. The vast majority of their developers are assigned to OS level work. Those working on stock iOS apps seem to get assigned to whatever app Apple is concentrating on at the moment (the Notes app benefited from this in years past) with few or no developers assigned to other apps. So either a stock app gets a bunch of new features (notes over the past several years, the Marzipan apps this year, etc.) or it gets bare minimum maintenance.

I didn’t mean to say that an important reason for not updating Notes/Mail/Calendar/Calculator was commissions, but I think they want to offer the majority of people a good free option, but they have no incentive to improve it significantly, especially if it could undercut the ecosystem of competitive apps (in which it derives service income). If Apple were especially serious about making a first-class app they would (or they’d buy one a developer), but they want to encourage the market to come and offer better products when possible.

If Apple would continue to iterate on any of its stock apps it would probably be Notes, if only because the more people use it the more iCloud space they use (and need).

Apple does have limited resources, but they always did. More than that though, they have priorities.

Fundamentally, I think this is a problem of limited resources on Apple’s part.

Interesting concept that a company with +900$Billion market cap and revenue about $400K/minute cannot scratch up a couple hundred thousand to hire a Notes developer or two. Lack of resources is not the case with Apple.

The ‘I can’t believe Apple can’t spend x on y’ outlook has been around for what, 30 years now? Apple makes choices - Steve Jobs famously said innovation is sating no to 1,000 things when in 1998 he cut Apple’s product line from 350 to 10. Nine years ago Tim Cook was equally, if more loquaciously, in agreement at a Goldman Sachs conference:

we are the most focused company that I know of, or have read of, or have any knowledge of. We say no to good ideas every day. We say no to great ideas in order to keep the amount of things we focus on very small in number, so that we can put enormous energy behind the ones we do choose, so that we can deliver the best products in the world. In fact, the table that each of you are sitting at today, you could probably put every product on it that Apple makes, and yet Apple’s revenue last year was over $40 billion. I think the only other company that could say that is an oil company.
And that is not from just saying “Yes” to the right product which gets a lot of focus. It’s saying no to many products that are good ideas, but just not nearly as good as the other ones. And so I think that this is so ingrained in our company that this hubris that you talk about which happens to companies that are successful but then decide that their sole role in life is to get bigger, and they start adding this and that and this and that. I can tell you the management team of Apple would never let that happen. That’s not what we’re about. So, focus on people, and ensuring that it’s a small list of things to work on and putting all of our wood behind those things, that’s the magic behind us.

Apple has a relatively (and surprisingly) small and mobile and focused group of in-house developers, and with Brook’s Law firmly in mind they focus on the most important things, and get to what else they can when they can, and leave much else into relative maintenance mode. This is by design. Indeed, lack of resources is not the issue, but it’s also not a matter of scratching up money but focus and control over specific, limited projects and to not diffuse that focus. Yes, that is an interesting concept - and we’ll continue to see it implemented as long as the company continues to be successful.

I switched to DEVONthink which also has note links, but saved this for later and was a top result when I searched for Apple Notes:

Let’s be honest. Apple doesn’t care much about its apps.There is basically NO improvement in Reminders, which is really a terrible app. Apple Calendar and Notes don’t see any significant updates either. It was really cool when Apple introduced tables for the Notes app. Until I realized that you can’t even resize the columns. How ignorant and stupid is that?
And what if you accidentally delete the contents of a note? Not the entire note, just the contents or part of it. No way to get it back.

I love to use Apple products but I am much frustrated about how little they care about their built in apps.
Luckily there are plenty of alternatives. While I used to be an Evernote User but never happy with the interface, I am on OneNote since around 2 years. It has its own issues but in general it does what I need it to do perfectly good.

Let’s be honest. Apple doesn’t care much about its apps.

Let’s not make a sweeping overgeneralization. Apple offers bare-bones functionality for some free apps and lets 3rd party developers offer more (or use the OS underpinnings in their apps, as we see in numerous Reminder and Calendar apps), but in other cases they offer better support and updates (eg Pages, Numbers), and in some cases - Like Logic Pro and Final Cut Pro - they offer super-competitive apps at unbeatable prices compared to the competition.

Notes offers far more functionality than Apple needed to offer. If you want a cross-platform app that effortlessly retains contents of parts of deleted notes, or does sophisticated work with tables, you pay for it. Notes didn’t have to be as good as it is.

Has anyone noticed how the visual effect when you push the home button has changed with iOS 12? Before, the icons would whiz to the right until the first page was reached. Now, the first page fades in over the current page.

My real question is why Apple wastes their time with this kind of thing. Why not spend the man-hours doing something useful?

Because you turned on Reduce Motion in Accessibility, and that’s important to some people.

Huh, wonder how that happened…

What is the objective here? Step 6 of that article states that the link will be copied to the clipboard, so you can paste it everywhere. Does that not happen when you simply click on copy link, in step 4?

Nope. Think of it this way, tapping “Copy Link” in step 4 is you saying “I’d like a copy of the link to this note.” Step 5 is Notes saying, “OK, I need the email of the person you’re going to share this with to create the link”. You don’t actually get the link on the clipboard until Step 6.