I have a DS612+. I’m not sure if both of the disks are being used. Based on the attached pics it shows Disk 2 Not utilized.

It is set up with a Synology Hybrid RAID.

I also have cloud sync back up running to BackBlaze B2, and Photos being backed up to AWS.

Do I need to format Disk 2? I must have missed it when I set up last year? 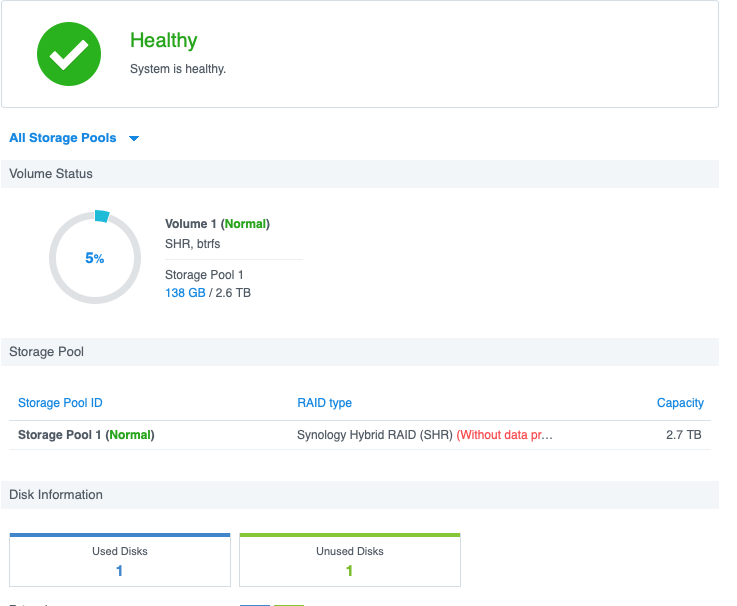 Yes you need to initiate (format) the drive before it can be added to the Raid configuration. This link to the support website should get you started.

Just curious if you consciously chose btrfs or
if that was the default file system for that box?

This raid configuration actually is not in raid mode, (it says “without data protection”)

Just a heads-up - adding a drive to the RAID will take quite some time to complete. Mine took several days when expanding from two to three 3TB drives. So… this is apparently normal, so no need to worry when that happens

That is the default for Synology

@airwhale I expanded a SHR 6TB drive to 2 drive, then added 2 other 6TB, the first expand was pretty fast, just copied the data for data protection, but adding the other two was much slower since it had to do the redundancy and in effect was changing the kind of RAID from 1 to 5 but the SHR version. So in his case, it should be fairly quick to just mirror the drive. He won’t have more space though, but he’ll get protection.

actually that is not my point.
off site backup is nice, but this synology is capable of on site redundancy, and I would take advantage of it if I were you…

You connect a usb drive and backup to that.
If needed you can mirror the Synology to other units. On the same network or via the internet to a remote location l.