Yeah. Tana appears to be the new new. Lots of PKM people talking about it. A few well-known Roam/Logseq/Obsidian users have jumped ship and are singing praises.

It hasn’t been easy and my journey is far from complete, but I’ve managed to stop being one of these people who chase apps and systems like they’ll solve all my issues. In fact, the more I’ve pared things down and simplified, the less stressed I’ve become over my “productivity”.

There seems to be an endless circle of people who feel the need to craft (pardon the pun) a 12 minute YouTube video on why they’re leaving an app or why another app holds so much more for them. These videos inevitably lead to a bunch of their viewers following suit, resulting in an abundance of articles and clips all over the web about why people are changing, how the future is so much better with another app etc.

I realized it’s not about keeping up to date with all the newest apps and “productivity” personalities on YouTube. It’s about finding a system that works for you and avoiding the temptation to needlessly overcomplicate things because it makes your system look cool or because you’re doing it the way (insert person name here) does it.

I’m just kind of over it all.

I’m there with you. Having fallen into this trap myself, I’ve pared down the apps I use, or even try, and I’m striving to stick with what is working well enough. I want to focus more on producing and less on “productivity,” as paradoxical as that sounds.

I watched the video, although not with an open mind because as soon as I saw the “glossy” promo start I was judging it

I feel I’m starting to go against Silicon Valley’s shift here, because I don’t want one app that does everything moderately well (or poorly…). I like having different apps for different things (within reason). E.g. Why do I want my personal reading list in the same app as my work to-dos, meeting notes, projects, PKM, etc??

Anyway this comment is mostly irrelevant since it looks like your data is on their servers and I’m fundamentally opposed to that (although worth noting many employers would also not allow staff to keep work notes on a third party system).

The future of software seems so strange to me. It feels as though soon every new major desktop/laptop device will be like a Chromebook; hardware generally useful for accessing the Web and web apps, that’s it.

That’s been predicted since the 90’s, there’s a place for local apps and storage, especially as robust fast internet access is not as available as many people think it is.

The more done locally, the better, where appropriate/

I think the idea is as old as computers themselves, it was originally called timesharing.

In computing, time-sharing is the sharing of a computing resource among many users at the same time by means of multiprogramming and multi-tasking. Its emergence as the prominent model of computing in the 1970s represented a major technological shift in the history of computing. By allowing many users to interact concurrently with a single computer, time-sharing dramatically lowered the cost of providing computing capability, made it possible for individuals and organizations to use a computer ...

Nah, that was one computer, i.e. mainframes and mini computers with text terminals. I worked on those in the 90s.

Isn’t it really the same idea if you think about it? There is a remote computer somewhere hosting your data while your computer just displays the result of some computation on a server manipulating that data.

If you boil it down to that very superficial level, that could be said, but the technical layers say that they’re different concepts for different times.

But isn’t a chromebook closer to a time sharing computer than an MacBook Air for example? Nothing is stored on the chromebook except some browser cache files. All the power is in the Google data centers and the chromebook is a cheap laptop a student can afford. A mainframe of the 1970s was not affordable by any individual, but the terminals allowed several people to enjoy the power of that mainframe all at the same time.

That’s true, but there’s a whole lot of unpicking to do in the phrase “degree of agency”

There seems to be an endless circle of people who feel the need to craft (pardon the pun) a 12 minute YouTube video on why they’re leaving an app or why another app holds so much more for them.

Not, he said cynically, unrelated to how they make a living

Degrees of agency could be:

I’m sure there are more cases or better descriptions, but this is the gist of what I meant.

Average users would likely not notice the “degrees of agency over their server” but would pay attention to the access pathway and user interface, whether it be a terminal client, a browser interface to the web, a locally running but cross-platform app, or a native desktop or mobile app. The server itself gets more and more hidden as you progress up this chain.

Sorry - I was being way too cryptic.

I was thinking in terms of control over your data and the marketing around it.As you point out in your reply, there’s more to this than just where the data’s stored and who can act on it.

My point is that you have to do a lot of unpicking of marketing euphemisms, disingenuous “commitments”, technobabble designed to obscure/deceive and some definite dishonesty to get a clear picture of the degree of agency you actually have.

Apart from dodgy privacy policies, the sort of thing I’m thinking of is providers who don’t act on customer instructions to delete their accounts/data. Or even simply providers who dot secure the data and allow it to be stolen.

I’m intrigued by it (hence signing up to the waitlist), but my concerns would be as other people have said: data on their servers and a lack of portability at the moment.

The supertag concept intrigues me but agree that this seems to be initially taking aim at Roam users.

There is a tweet that they are overwhelmed with request for early access, I am one of them

I am on the waitlist so have not gotten to try it yet.

But based on this video Tana is enormously beyond just another notes program.

I have not wrapped my mind yet around whether it is an alternative to Filemaker or Excel or to low-code apps. For sure it is extremely customizable - but precisely how to characterize what you can build with it is not clear to me yet. 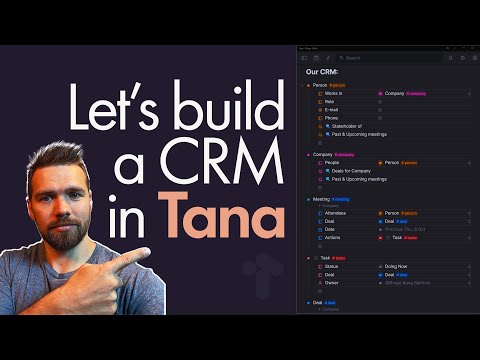