Hi MPUers, I was browsing through the forum and picked a few new tricks for Text Replacement from a few threads in the past. As it’s been a while, I was hoping we can do another round where we all share the tricks we use for text replacement on macOS and iOS.

I use Alfred for text expansion, but Alfred doesn’t work on iOS and Apple’s standard text replacement does not work as well on the mac, so I sync them. Also, since it is slower to access special characters on the iOS keyboard, I stopped using ; or . as prefix for my snippet keywords. Instead I use misspelled words with the last char repeated (most snippets follow this rule). I used to misspell the first char, but it’s difficult to go back and edit. I picked this from @tjluoma in one of the threads.

You can get the gist from my approach. Mac has some additional snippets in Alfred which are much more intelligent, that can’t be replicated on iOS, like, datee show the current date in the specific format, vv prints the current clipboard content without any formatting.

PS: On another note, I’m getting enticed to get Typinator as it was the software of the month. Love the features like DOuble capitalization correction and new sentence correction. LMK if anyone can point me to a discount code/coupon

I used to start my shortcuts with two “,” characters but that was too slow on the phone so now I use “q”, e.g. “qph” inserts my phone number. In English there are no common words that start with “q” and whose next letter isn’t “u” so this works for all of my needs.

One down side of using the built-in expansion is that you have to type a space or a return after the shortcut but that really doesn’t bother me.

that is, there’s no way to create a multi-line expansion on iOS

Have you tried copy pasting the multi line content on iOS?

LMK if anyone can point me to a discount code/coupon

Take Control Books title Take Control of Mac Automation has a 30% off code for Typinator.

Along with codes for other automation tools including 20% off Hazel and Keyboard Maestro.

Yeah, I tried everything I could think of, no dice. I even thought of writing an app for it but I don’t think the necessary API’s are public. It’s no big deal since I have the Mac.

We use a system at work that uses “dot-phrases” for text replacement. Given the amount of documentation we have to do, most of it is somewhat standardized, many of us have built hundreds of these.

So I’ve just carried that over to my apple devices.

Occasionally I’ll find a conflict with, for instance, the end of a web address http://www.nice.shrug becomes http://www.nice¯\_(ツ)_/¯ but I can hit ESC or the text replacement bar.

The others I use a lot are arrow keys. -> becomes →. This becomes a problem with mermaid in Obsidian where I need to type --> and it becomes -→. There’s some typing gymnastics to avoid that substitution.

I’ve used aText the last few years. $5 and available on Windows and Mac.

I use some shortcuts through Apple text replacement, but I’ve also started using snippets on Alfred in the last year. In particular I have also downloaded the snippets emoji pack so I can do emojis from the keyboard (I use an external keyboard). I’ve deleted all the emojis I don’t use, and set a few to words I use instead, and it’s great!

I just use ; at the front with Alfred, not for any reason, just because it’s what I saw others do. It’s fine for me.

I like that Alfred lets you open your snippets and scroll through from the keyboard, because I have a lot of sentences for emails saved and I can’t always remember what I’ve saved the shorthand as (you can navigate to this via mouse as well, but it’s quicker via keyboard when you’re writing).

On OS text replacement I just have initials for short phrases. I’ve had ‘shruggie’ for years for ¯_(ツ)_/¯ - at work I confused my colleagues when I wrote this in a Microsoft chat and it didn’t work!

One of my favorite things to do is invoke a Keyboard Maestro macro that will open up System Preferences and go straight to the Text substitutions screen. This allows me to add a text shortcut quickly. 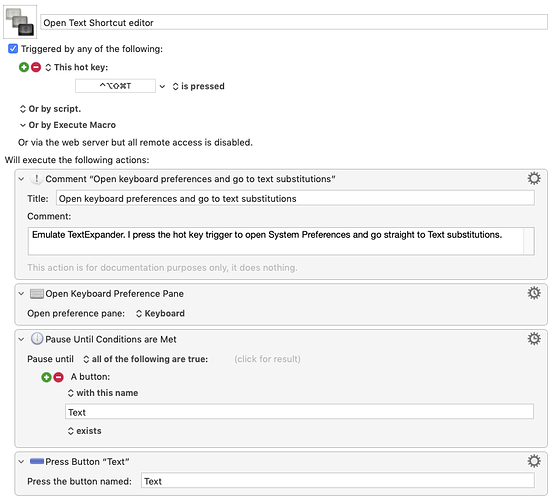 I do the same thing using Alfred and an Apple Script

, but I’m trying to consolidated things into fewer apps

Sharing it here in case it helps someone!