This didn’t come from me, someone posted this idea in the Cortex subreddit but I can’t track down the original comment. But I want to relay this idea because it’s been fantastic help.

The idea is essentially this: In Dungeons & Dragons, a held action is essentially an action that you prepare, but will only act upon when the opportunity arises. The OP of this comment was saying that he’s just had a kid and wants to stay on top of everything, but instead of stressing about when something happens, he designates the important thing to be done as his held action. So when the baby goes to sleep and the window of opportunity opens, he already knows how he’s going to use that time. As someone who just got a puppy (not trying to conflate babies and puppies as people are wont to do), this was a freaking revelation and I’m thrilled about it. Luckily my job doesn’t have fixed hours as much as it has deadlines, and it means I’m able to give the puppy my full attention without panicking about work, because she’s gonna fall asleep for a few hours and then I can use my held action. And that held action can be anything! It can be once I get on the train, I’ll watch that episode of [insert cool show here] or something.

It’s made me so much more secure in spending intentionally unstructured time. It’s really opened my eyes to the fact that I don’t need to be searching for opportunities to do things all the time, because I have my held action, my intent for when I have the time to execute on it.

I use Drafts for this all of the time. If I think of something that I need to do later, I just create a new Draft and leave it there knowing that I will process my Drafts when I get back to my Mac later.

Also, by rules of the Internet, you are not allowed to mention that you have a new puppy without also sharing at least one picture of the puppy.

Those are the rules.

Failing to do so is considered cruel and unusual punishment.

I really like this!
It’s priming because you’ve thought about the action before, your brain is processing it beforehand.
You don’t have to decide what you’ll do, you already know.
It frees you up to just go ahead.

same, I use post it notes, or write something on what I’m working to quickly come back to it later.

This approach is similar to how GtD uses “context” and the concept of a “backlog” in Agile and Kanban.

Tasks are defined and ready to go, but without any “Due Date”. You pull work from the stack depending on current priorities and practical circumstances.

I think some of the examples given take away from the beauty of the held actions idea.
In DnD you’ll have strategies, ideas that one you get to the next you’ll do this and that. That’s planning, and contextual planning can really help further.

But you get to have one held action, or rather ready an action. This is something you know you want to do soon, but now is not the right moment. But having it poised (priming works well for me) means you are more likely to actually get it started promptly at the appropriate moment. e.g., if I get a 25 minute window, I will watch my 23 minute comedy.

I like the idea, and I think I already do it if am getting overly stretched and notice I am procrastinating. I’ll consider using it more now.

Possibly I have not had enough coffee, but I’m not seeing how “held actions” is any different from just making a to-do list?

I have a dog but no children. Friends with both say raising a puppy is very much like a baby, in terms of attention requirements. And, the dog, unlike the child, will never advance beyond the stage of development of a human two-year-old!

My take away is that it is more light weight than a to do list even, as it only has one item on it.
For me, it’s looking like a great strategy for when I am feeling that I am, or soon will be, overwhelmed.

So I think the difference for me personally is the urgency of it. If I have a thing that needs to get done, it will get done regardless of extraneous stresses. Held-action is often more related to leisure actions, or stuff I really want to do for myself that I otherwise wouldn’t have/make the time for if that makes sense? If I want to play guitar for half an hour or play Elden Ring or something, that’s the held action that I’ll have once other urgent responsibilities are handled. Am I explaining myself at all here?

Of course! How could I forget Dog tax!

This is an old picture (she’s much bigger now), but this is Molly! 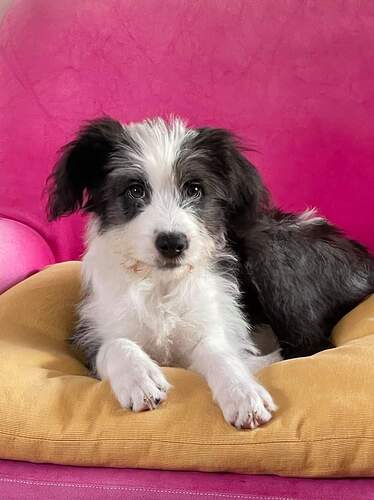 Holding/readying an action is highly situational in D&D. You should almost never do it because it’s rare that your trigger is guaranteed to occur and you can do something useful enough to make up for the day, like breaking a wizard’s concentration. More likely, either your trigger won’t occur so you won’t get to act, or your damage will be applied late enough that combat is affected. Plus, many tables observe the “rule of cool” which rewards bold, creative actions more than defensive, calculated play. In those games, you’ll contribute much more to combat by coming up with something unorthodox and appealing to the GM to make it immediately possible.

So, my D&D productivity tip is: Improve your initiative! Increase your dexterity by getting more sleep and hitting the gym, so you can do the action you would’ve held until the evening in an equally good time slot earlier in the day! Bonus: improve your proficiency in “stealth” to improve the odds you can arrange your day before combat begins to give yourself a surprise round against your puppy.

so rereading this, would a similar example be when cooks place everything they need next to them?

I think the idea here is similar but slightly different. The analogy I’m currently thinking about is tax paperwork.

My wife (bless her) collects all our tax stuff until it is time to have our taxes done. She doesn’t plan to actually do the taxes until everything is in place, but she knows that she plans to do them at some point in the future. When that time comes, everything she needs will already be collected.

My wife (bless her) collects all our tax stuff until it is time to have our taxes done.

I think those fall under the umbrella of being organised.
This is more about “when the opportunity arises to do something I want, I need to grab it.”
It’s more about making sure you don’t miss your opportunity for me.

I hate to get all GTD-ish, but isn’t this the same as the @Waiting For list?

You’re right. There’s a similar vibe as some things that GTD has, I would have said either “Waiting” or “Maybe/Someday” but I don’t know how many people are familiar with “Actual, Full GTD”.

I’m admittedly a little disappointed no other tabletop RPG player has over-engineered this analogy with me.

This seems distinct from the “waiting for” concept in GTD. “Waiting for” is a task that I cannot complete right now due to some external dependency. As in “I can’t process this reimbursement until Jane gets me the invoice.” The “held action” as @TheLegendOfLeo describes it is a task that I could do immediately if I had a block of time to do it in.

In a GTD context, we usually think about a list of next actions for current projects (possibly sorted by context). When we sit down to work, we look at the list for our current context(s) and pick one of them to work on. The “held action” is basically picking one of those next actions ahead of time and saying that as soon as I have a window of opportunity to work, this is the next action I will work on.