Inspired by the amusing thread about Contrary MPU opinions, and the fact that I just upgraded my laptop after 7 years, I’m wondering if there is one Apple tip you would feel most people would benefit from. (I know narrowing it down to one will be difficult for a lot of people.)

I know in this group that a lot of people use software like Keyboard Maestro, Alfred, TextExpander and tips can relate to those but they don’t have to.

Get an iPad; you’ll be much happier and won’t have to endure my lectures about everything that you’re doing wrong with your computer

I think my favourite tip is one that even a surprising number of power users aren’t aware of, and that’s the variety of keyboard text navigation modifiers:

The same also applies for selecting text, of course—just add Shift to the combo.

A saved search on the sidebar in finder with files created or modified in last 0.2 days makes it really easy to find and attach a file I have been working on to an email.

With regard to Finder in column view, always (seemingly) truncating the names of files in a a particular folder or subfolder:

I did not know this! Thank you!!

Any keyboard shortcut suggestion that the suggestee actually ends up using is a source of joy for me.

Mostly(!) one for none-power users, I’m frequently surprised at the number of people who don’t know about AirDrop. Lost track of how many times I’ve wanted to fling a link / photo / file over to someone, asked if they’ve got AirDrop turned on and got a blank look in return. “Have I got my What turned on?”. Usually they’re delighted with it when you show them what it is & how to use it.

In macOS, select any text (in most apps) then grab it and drag… and you’ve created a Text Clipping which can be dragged to Desktop or folder, edited by double-clicking, and drag-and-dropped into any app that accepts text. It’s been in the Mac for at least 15 years, but Mac users I know don’t really know about it. In the age of multi-clipboard apps and things like Alfred Text Snippets it’s a somewhat vestigial feature but still useful. 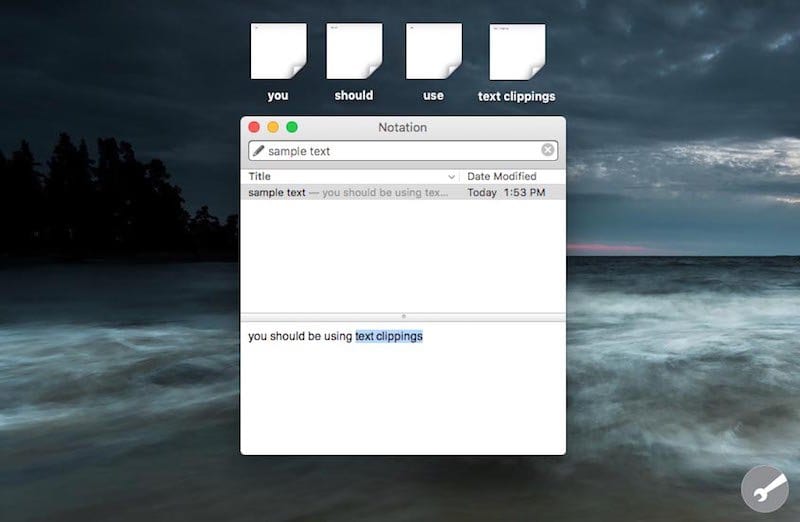 Text Clippings: The Little-Known But Useful Mac Feature That's Been Around...

See that little PDF icon in the top of the Preview toolbar?

Not sure how many people know that it serves as a ‘proxy’ for the actual PDF – which means you can drag&drop it to wherever (or onto a shelf-app like Yoink) to move and share. Earlier this year, I had a picture taken on my iphone with a person that had been in jail for about 20 years and had just gotten out a few months prior. He asked if I could share the photo with him and I said yes. He asked if I could Airdrop it over to him. Someone that didn’t even have a cell phone for 20+ years knew about Airdrop more than most people.

Get an iPad; you’ll be much happier and won’t have to endure my lectures about everything that you’re doing wrong with your computer

I absolutely love this. I tell non power users this same thing all the time. I used to have to do remote support form my mother’s Windows computer which was getting more and more difficult since I switched all my stuff to Apple 15 yrs ago. And what’s worse, when I would visit her, I spent a few hours updating that damned machine.

I bought her an iPad and BAM! the support calls fell like a rock. Sure there was a small learning curve, but now my support load is almost nil.

It might be obvious, but my tip is “explore what the Dock can do for you”. It’s not just for starting apps.

That actually works for any file type. For example , a Word doc, an email, Adobe Acrobat. (Of course, they have different icons

). Sometimes, you have to save the file first and you have to target the icon accurately.

Not sure this is a tip, it’s more a factoid that saves you a lot of time and I am explaining all the time: the difference between having full bars (?) on the Wifi symbol and having a fast interent connection.

(I have been wondering if the Wifi indicator shouldn’t add some data dimension for showing the actual internet speed / quality - though of course this is sometimes a bit subjective.)

According to this thread at the Apple forums the trick is to make sure the default list is at the top of your lists in the Reminders app on iPhone. Regardless of settings, that’s where Apple Watch Siri is going to stick things unless you specify a list.

Yes, that’s very valuable. (Dragging the file icon on the window title bar) And Cmd-clicking on it is very useful too!

This one is very counter-intuitive, but very useful when you get the hang of it…

If you have a file selector window open, e.g. from File > Save as… or File > Open…, it often opens the wrong folder and you have to go through a tedious set of clicks to navigate to the right place.

However, you can drag files or folders from the Finder into that window, which will cause it to switch to the same place as the thing you’re dragging from the Finder.

These are great and they’re so ingrained that I forget to share them.