I am thinking about purchasing Hazel. What do you use it for? Do you find it useful? Is there a big learning curve?

I seem to remember using it on a old laptop and finding it very useful.

I use it for only a few things but now I have it I find it excellent for those things.
It sorts my bills et cetera into sub folders, it empties certain folders after files get a week or a month old, and it tidies up bits and pieces after I uninstall an app

Is it easy to use, Graeme?

Frankly, only you can judge its “easiness”. Read the documentation how to setup and use at Hazel Overview – Noodlesoft

I use it to automate detection of many types of files (invoices, statements, my created PDFs, etc.), sometimes renaming them based on content, moving them into folders where they will reside. It also cleans out trash, removes “extra” files when I delete apps, etc.

If one values that sort of automation, then it’s useful. Otherwise, not. Me: I like to have the computer do as much work for me as possible.

I think the removing all the ancillary files when you uninstall an app is a preset rule can turn on. The automatically clear out the Trash is a pre-defined rule you can activate too.

Another example is that a get several forms each month which I need to sign and which I find easiest to sign on my iPad.

So, one rule I have set up is to have Hazel watch my downloads folder so that when I download a file to my Mac from my iPad with (a) the string “pandec” and (b) the string “sgd” in the filename, Hazel automatically moves it to the folder on my Mac where the “pandec” files should be stored.

By the time I have put my iPad down and turned back to the computer, it’s all nicely filed away.

As an added bonus, with Default Folder X and its Recent Files pane, I can then attach the signed pdf to an Email without ever having to actually wade through the file structure to find it.

As an added bonus, with Default Folder X and its Recent Files pane, I can then attach the signed pdf to an Email without ever having to actually wade through the file structure to find it.

Okay, you have motivated me to fire up Default Folder X again. Maybe this time it will stick with me.

I have used Hazel for many years. Some of my uses have come and gone, but what remains are:

Clean up tasks. My Downloads folder is watched and certain files are addressed after some time has elapsed. Images are moved to the Pictures folder, PDFs are moved to the Documents folder. One type of PDFs is renamed by a special script so I know what it actually is.

Action tasks. I have several folders whose sole purpose is to run scripts on the files placed in them. These include specialised graphic conversions (like splitting multi-page TIFFs), and one to spot special ‘proxy’ photo exports from Lightroom, which I use to get Lightroom keywords into PhotoLab-exported JPEGs. I also have some that simply launch the file into a specific application, which provides me with an “Open in” from apps that do not have such functionality — I simply export to the folder instead.

I’m struggling to remember many of the tasks that I have since stopped using, but I did have others like the above ones, and some attempts at auto-filing, such as by sorting into date-based folders or such like.

I’m a big fan of Hazel. I find it reasonably easy to use, but I did have to search the internet for some recipes when I first started. Then I just picked all the other things up as I used it.

It’s a great tool, but the three things that have given me the biggest time-savings are

I use it for more than that, but those three things alone made Hazel worth the price of admission. What’s cool is that the folder I start from is an icloud folder, which means any documents that I download and save from my iPad will automatically trigger Hazel on my Mac instantly (if my Mac is awake) or once I wake it up (if it’s not). It works great and is not too fiddly for most things I use it for.

How do you get it to trigger the OCR-ing?

I tried that some time back but couldn’t git it to work.

I haven’t figured out how to use it as a shortcut for opening documents.

However, I have found setting up several “Favourites” for places I frequently save things to but which aren’t in my Finder Favourites sidebar is a great help.

I’d say go for it. I don’t have a lot of rules setup but the convenience of having it run on things automatically is totally worth it.

My most common use case is managing documents - specially encrypted bank documents.

On the Downloads folder

On the paperless folder

On the originals folder

Here is my Hazel recipe: 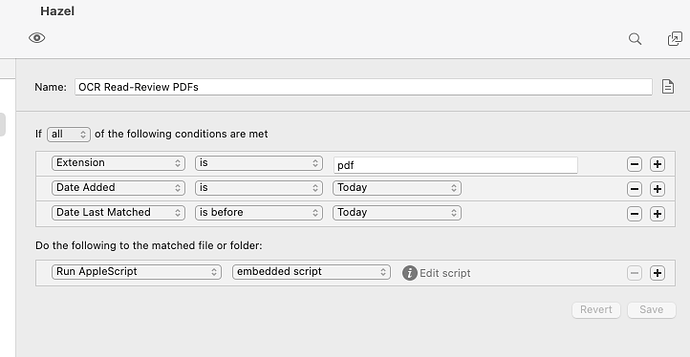 There was a recent discussion here about getting the updated Nitro PDFPenPro to work because something broke the old script many of us were using. The discussion is here, along with the full text of @tomalmy’s patch to the script, which is exactly what I use:

I just replied to this in an almost identical thread. If your OCR script has “get the needs ocr of document 1” in it, it seems that no longer works. comment out the line and change the next line to “if true then”. It’s not a perfect fix since it will ocr previously ocred documents, but that is what an older script did. The older script: tell application "PDFpenPro" open theFile as alias tell document 1 ocr repeat while performing ocr delay 1 end repeat delay 1 close with savin…

If this does not work, let us know what trouble it’s giving you and we’ll see if we can help you figure it out.

Ah. I am using Acrobat DC doesn’t seem to allow.

I see you are using Nitro PDF - I thought it had become deprecated when there was an ownership change?

I might see if I can work out a way to route it through Devonthink to use the OCR there.

For me, Hazel is one of those Apps, I bought for a special small reason, and been using it for more and more Use cases.
It is just a convenient solution for a lot of things.

One of my use cases is photos. When I airdrop or download a photo, instead of going to my downloads folder and clogging it up, I have a dedicated folder (one for videos too) that Hazel sends them too.