Third party Twitter clients are down. Does anyone care?

I’m pretty sure I read a post on Mastodon yesterday of someone who filled in his Twitter API credentials in Spring and saw them revoked a couple of hours later.

Unfortunately Mastodon does not offer free text search, so I’m likely never going to find it back.

If all users indeed have to enter the same URL (with “spring” as one of the components) on Twitter’s developer portal, it’s going to be rather easy to block everyone…

r/Tweetbot - Going to attempt my own API on Spring 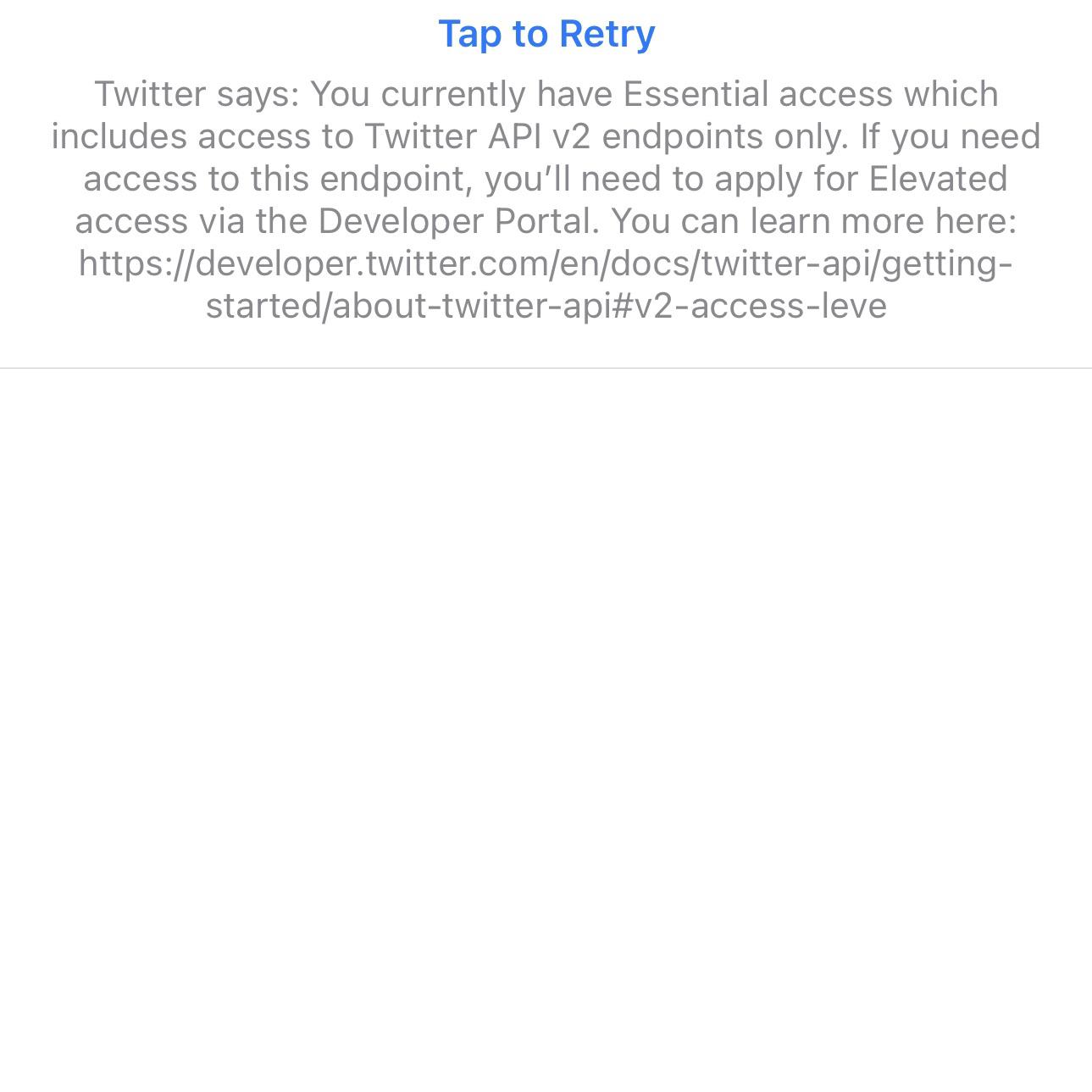 I guess the optimistic case here (for Spring) is that although the % of third party users willing to jump through this hoop will be small (or tiny), it could be worthwhile for the Spring developer if Spring is the only game in town

This approach was used originally by the Fenix app (Android) quite some years ago untile they had proper app-client based authentication. Basically each user presented itself as a new “client app” with their private/public keys, it’s only that they are all using the same software. I’m not really sure this would circumvent Twitter strategy, as if this was the case all the rest of the clients would be easily resuscitated by the devs. Or perhaps that would lead to stronger API monetization tactics by Twitter.

Oh, man. The fact that you invoked the race card with the reference to “white men”and basically saying that our viewpoint is racist is well — never mind. Enough said.

I’m going to stop commenting on this thread now but it’s very tiresome to see white men in this forum dismissing the harassment of other user groups as “all viewpoints should be allowed”. There’s quite a field between “we should be freely able to discuss things” and “we should be allowed to use racial slurs and threaten violence against anyone we don’t like”, which is what Twitter is now offering up for many.

Just for the record, FWIW, as a white man on this forum, “we should be freely able to discuss things” is exactly what I mean if I indicate that “all viewpoints should be allowed”. I think it’s possible to legitimately disagree on many things, and the discussion is important.

But if somebody is threatening to physically harm somebody else, I think it should go without saying that the offender needs to be booted off the platform and reported to the police.

It doesn’t have to be “all or nothing”.

you can use any word and spring doesn’t have to be included - I used name://
Still working for me too

Someone has posted a step-by-step guide to setting this up in Spring.

How to get Spring working again

iOS and macOS are separate purchases for Spring?

(Of course if you already bought Spring before this drama, this is a great feature)

I’m not going to bother trying to get a Twitter client to work somehow. Twitter doesn’t want them on the platform, so it’s probably going to be a cat-and-mouse game. And no app developer will invest more time in such apps sooner or later.

Someone has posted a step-by-step guide to setting this up in Spring.

Thanks I got it working.

Having not really read Twitter for over a week I have suddenly realised I really do not care what a developer (or their cat/dog/gerbil ) had for breakfast, listens to or their personal, and used to be private voting habits.I think I am well rid of it.

And Mastadon isn’t any better and has way more concerning stuff on making it an 18+ platform. I’m not convinced that Mastadon is a good replacement.

I know everyone is screaming, “no censorship”, but that could well end up being worse. There’s already a lot of polarisation around Mastadon servers.

There’s already a lot of polarisation around Mastadon servers.

There’s polarization anywhere there are people. I’m new to the platform but AFAIK we can choose to engage in the conversation or block it.

Control what you see, for a more comfortable social media experience.

Actually I prefer this forum!

Social media has lost its appeal for me. It’s a whole load of blah blah blah which in 10 years time will still be blah blah blah. Perhaps my age is making me question the actual value of social media. In the last number of years it certainly hasn’t been positive.

Actually I prefer this forum!

So do I. I used Twitter as a news feed and I’m using Mastodon the same way. The only posts I made were for software, etc. support.